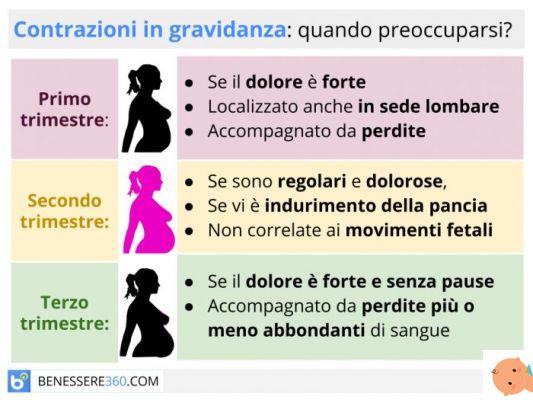 It is useless to deny it: even if slight and occasional, the contractions, in whatever gestational period they are felt, always cause agitation. Let's see when they can be considered physiological and when it is advisable to be seen by the specialist.

"Generally speaking, sporadic and mild intensity contractions can be considered physiological" said Maria Antonietta Totta, obstetrician and host of birth accompaniment courses at the Casa Sollievo della Soflievo in San Giovanni Rotondo (FG). "If, on the other hand, they are repeated and painful, and above all they are accompanied by blood losses, albeit modest, it is always necessary to contact the gynecologist for the appropriate checks".

Contractions in the first trimester of pregnancy

IN THE FIRST QUARTER

In the very first weeks of pregnancy it may happen to experience menstrual-like pains, with small aches and a sense of weight in the lower abdomen: "This can be determined by the implantation of the product of conception in the uterus, which occurs around the 4th week" explains Totta. "The sense of weight, on the other hand, depends on the endometrium, which in this period is soft and 'full', precisely because it is preparing to welcome the new life. Usually, however, in this period the woman does not yet know she is pregnant, indeed she believes that such symptoms herald the arrival of menstruation!

In addition to the beginning of pregnancy, small contractions could be felt at the change of the month, that is, in correspondence with the days in which the menstruation should have arrived. For this reason, if the woman already feels slight contractions, it is usually suggested to avoid physical exertion, travel or sexual intercourse these days, which could favor contractile activity ".

When you have the sensation of imminent menstruation, with a sense of pain in the lower abdomen and kidney pain: the uterus is in fact anchored to the utero-sacral ligaments, which, stretching following the contraction, cause resentment in the kidney area, precisely as it happens during menstruation.

Read also: Contractions: what they are and how to recognize them

Contractions in the second trimester of pregnancy

IN THE SECOND QUARTER

During the second trimester, and in particular starting from the 20th week, small contractions are generally related to the baby's movements. "But it is a slight hardening sensation, certainly not painful manifestations" specifies the midwife. "Even sudden movements of the mother can cause contractions, but they are always symptoms that disappear in a short time."

NB: When instinctive contractions appear, you have to massage your belly to calm them down. Instead it is good to avoid it, because the massage can further stimulate contractile activity: it is better to relax and rest, if anything, simply resting your hand on the belly.

When contractions appear regardless of the fetal movements or changes in position of the mother and when it comes to painful sensations that recur at regular intervals.

Contractions in the third trimester of pregnancy

IN THE THIRD QUARTER

Once again, small contractions can be considered normal if they are associated with the baby's movements, or if the mother changes position suddenly, for example when she goes to bed or lifts her legs on the sofa; It is also normal to feel a slight hardening of the belly if the woman makes small efforts or walks faster than usual, since they are mechanical stimuli that reflexively stimulate the uterus. To avoid them, just do things more calmly and slow down your pace.

At the end of gestation, therefore starting from the 38th week, it could instead be 'preparatory' contractions, which will allow the cervix to change day after day, to prepare for dilation. "We are in the so-called prodromal phase, which can begin even 10-15 days before the actual labor begins" underlines Maria Antonietta Totta. "Usually these contractions are felt at night, and then subside in the morning. If, on the other hand, they do not stop in the morning, rather they become gradually more intense and regular, it is better to go to the hospital: it may be that labor is about to start".

A curiosity: thin women feel contractions more than sturdy women, since fat acts as a buffer that deadens the sensations.

If the term of the pregnancy is still far away and the contractions appear with a certain frequency and intensity.