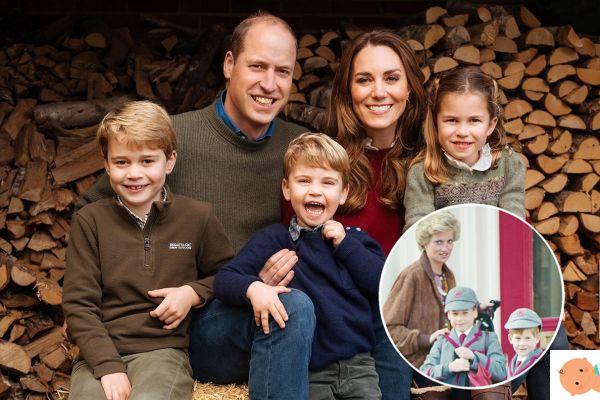 In a photo that appeared on the official Instagram profile of the Dukes of Cambridge, aka Kate Middleton and Prince William, it turned out that they too, set aside as royalty, love to get dirty in the kitchen making their children mess with creams and doughs. The photo portrays poppy-shaped cupcakes that were delivered to an association and the caption shows that Kate made them with her family. In practice, she too - who will have a dedicated staff only for the preparation of meals - knows that cooking with children it has a healthy and beneficial effect for the whole family. Of course, Kate Middleton's children will know everything about goodness at the children's table, given their blue blood parentage. But more than once the wife of Prince William has revealed that her children are little apprentice cooks and that, especially during the lockdown of March 2022, they all spent a lot of time in the kitchen between sweets and other preparations to pass the time. In addition to the actual approval, there is also science and research to support the idea that cooking with children has great repercussions on self-esteem, on the growth of family relationships and on the unity of the various members, as well as a great impact on the children's food culture.

Read also: Recipes to do with children

Cooking with children, a real habit

On the official Instagram profile of the royal couple consisting of Prince William and Kate Middleton, a greedy photo has appeared, a tray full of poppy-shaped cupcakes. The purpose of the family recipe is supportive: they were created to be distributed in a nursing home for the elderly in Norfolk, their home in the English countryside. Reading between the lines of the caption, it is obvious that the sweets were prepared not only by the hands of William and Kate but also by those of their children Louis, Charlotte and George of Cambridge (respectively 2 and a half, 5 and 7 years). In a Christmas 2022 interview, the Duchess revealed to Mary Berry - an institution on the British television culinary scene - that making her children creative in the kitchen is a priority for her. And who often, together, try their hand at complicated preparations such as those of pizza dough, one of the favorite dishes of princes. Royal Family news often reports that Kate and William aim to do normal things with their children especially in their huge home in Norfolk, where they live in complete privacy. And cooking is one of the ways to keep everyone on their toes. Kate Middleton has seen it right, because the benefits of cooking with the little ones are recognized by science and some research on the subject, which have confirmed the beneficial power of this family business.

Because cooking with children is good for the whole family

What focuses on the playful and didactic activity of cooking with children is a theme that has interested researchers several times and on several levels: the benefits were analyzed from a nutritional point of view but also from a psychological and evolutionary point of view.

Cooking from an early age feeds the food culture

According to a study carried out by the Department of Food Science and Nutrition of the University of Illinois entitled "Child assessments of vegetable preferences and cooking self-efficacy show predictive validity with targeted diet quality measures", children cooking as adults they have a better chance of living the relationship with food without particular difficulties. According to these researchers, cooking from an early age has led to show that this activity is "associated with virtuous behaviors in terms of nutrition" especially if developed within specific programs that lead children to interface with eating well already at school. In America, in recent years, many "Cooking intervention program" projects have been born for children, given that childhood obesity is a rather cumbersome problem. Developing a correct food culture with the help of experts and parents themselves therefore becomes essential for learning to eat well even as adults.

Cooking with children helps to recognize foods and properties

An exercise that is often also useful for parents accompanying children on this journey is precisely to find out which foods are good for what's inside and what benefits they give to the body. The study "Involving children in meal preparation. Effects on food intake" sought to analyze the correlation between family cooking and the habit of eating vegetables of children. In the case of meals prepared together with their parents, the researchers in this study found that the children tended to eat more salad than the children of couples who had prepared a lunch or dinner on their own. This is because cooking together often stimulates children's curiosity, prompting them to try firsthand foods they would not otherwise have considered.

What are the benefits of cooking with children?

According to the text Cooking with kids by JA Spears, cooking with children increases in an impactful way some of the basic cognitive skills they acquire at school or through contact with the external environment.

TAG:
Thermal cots for babies: what they are and how they work ❯