Coombs test in pregnancy: what it is and why it is done 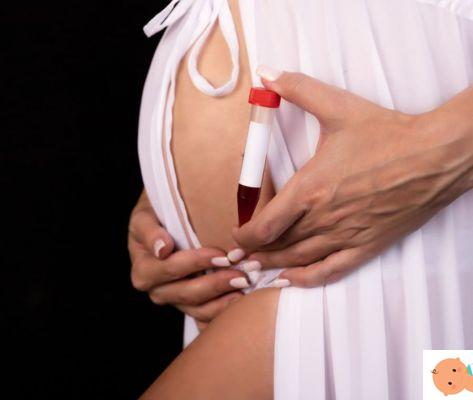 "The Coombs test takes place at the beginning of the pregnancy to assess if the mother's organism produces specific antibodies (anti-D) which destroy the red blood cells of the fetus, causing a consequent anemia, called "haemolytic disease of the fetus", which in some rare cases can even lead to intrauterine death. This happens when the fetus inherits from the father a blood group different from the maternal one with respect to the Rh factor »explains Sarah Moretti Montefusco, gynecologist of Humanitas San Pio X in our city.

There are two Coombs tests:

Read also: What is the RH factor

When performing the indirect Coombs test

«Generally the test - a simple one blood test, passed by the National Health System and therefore free - it is prescribed at the first gynecological examination, within the first trimester of pregnancy, and is then repeated at the 28th week of gestation »explains the expert.

«The test is used to see if there has been contact between maternal and fetal blood; contact can occur at any time during pregnancy, especially during invasive tests such as amniocentesis and CVS, or in the case of an abortion or during childbirth ". Generally, there are never any problems with the first pregnancy. The most serious problems can instead arise in subsequent gestations.

Read also: Pregnancy, all the exams you can do for free

Why is the indirect Coombs test done?

"The test is done to see if the mother has antibodies that could destroy the red blood cells in the fetal blood. This is especially possible if the mom has a blood group with negative RH factor»Explains Moretti Montefusco. There are four different cases in which one can come across:

There are also other very rare cases in which maternal-fetal incompatibility is not determined by the RH factor, but by the difference in blood group. In this case, we are talking about AB0 incompatibility. «For example, if the mother has group B she could develop anti-A antibodies and therefore react against groups A and AB; if you have group A, you may contain anti-B antibodies and react against groups B and AB. If in group 0, however, she could develop anti-A and anti-B antibodies, then react against groups A, B and AB ». This is why it is important to repeat the indirect Coombs test even towards the end of pregnancy.

Read also: The 4 rules for the expectant mother

Generally, in the case of women with negative RH factor an immunoprophylaxis is prescribed, generally to be performed around 28-30 weeks of pregnancy, to counteract the possible onset of anti-D antibodies. This is done by means of an injection made on the shoulder of the pregnant woman.

"During this prophylaxis, the indirect Coombs test will be positive, an element that should not alarm mothers: when the prophylaxis is finished, the result will be negative again".

The result of the indirect Coombs test

If the outcome is negative

Hopefully, "the Indirect Coombs test is negative: this means that there was no contact between maternal and fetal blood ".

If, on the other hand, the outcome is positive, it is necessary to contact a second level center. “There the fetus will be monitored through ultrasound scans, to assess its condition. The woman will then take a series of samples to see how severe her response is and understand how the pregnancy will progress ».

If the outcome is positive

In the case of Positive indirect Coombs test, there is a very broad spectrum of possibilities: “Sometimes, the repercussions are few or none; in other cases, however, the outcome may be the development of a "haemolytic disease" which can lead to perinatal death or the onset of brain damage for the newborn child ".

It must be said, however, that thiseventuality is very rare: «It is estimated that 1,2% of pregnant women will have anti-D antibodies and of these only 0,4% will have problems for the fetus». Different pregnancies can have different outcomes.

TAG:
Positive Coombs test: what to do and what it means ❯

add a comment of Coombs test in pregnancy: what it is and why it is done