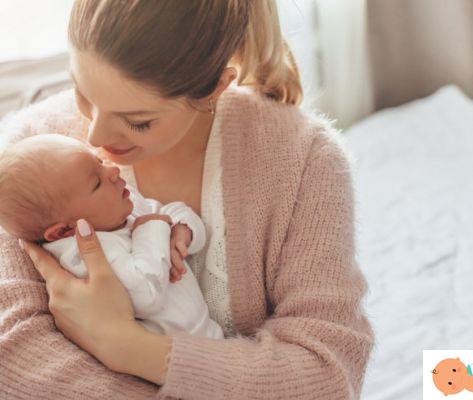 Getting pregnant again after a curettage

There are many women who have experienced one of the most painful experiences that can happen in life:miscarriage.
We offer you a selection of the most exciting stories of mothers who after a curettage they did not lose hope, and they managed to stay again pregnant thus fulfilling the dream of becoming mothers.

Images of the fetus in the nine months

Week after week pictures with the growth of the fetus during the nine months of pregnancy. See the miracle that brings the birth of a new life. From the union between egg and sperm to ...

Read also: Getting pregnant after a miscarriage

Fabio is my rainbow baby, who arrived after two miscarriages. Little Fabio arrived in panic, fear, chatting among doctors, after a very difficult pregnancy. He is an example of life. He believed in it a lot more than I did. Never give up on women. And get informed. Don't stop. Always demand checks and care.

Read the whole story of Fabio, a child who arrived after two abortions

2. My rainbow baby protected his little brother in the baby bump

I became pregnant suddenly, after having already had three children, and I was delighted. Unfortunately, the pregnancy did not go well and the baby's heartbeat stopped at the eighth week. I did the scraping: I was devastated by the pain of the loss. After some time I was pregnant again and this time the pregnancy went well. My healthy and beautiful little one was born, surely protected by my little brother in heaven, whom I will never forget and is now my little angel.

3. Spontaneous abortions and vesicular mole. But now we have three beautiful daughters

After a few repeated miscarriages and a vesicular mole, I thought I would never become a mom. Yet, now I have three beautiful girls: 6-year-old Ginevra Maria, 4-year-old Giorgia and 2-year-old Giada. The first two were born with a caesarean section, the last with a splendid natural birth. Girls never give up! We are now a family!

After four scrapings, two surgeries, various ultrasound scans, three hysteroscopies, routine exams and many, many doctors, I finally got pregnant and gave birth to a beautiful baby girl. It was difficult and painful, but I tell my story to tell couples who are experiencing the drama that I experienced with my husband not to give up, to be determined and to choose a good gynecologist carefully.

Read the whole story of a mother who, after 4 scrapings, became the mother of a beautiful little girl

5. My story after an abortion

We had been looking for our baby for two years. A child who did not arrive. When I found out I was pregnant. My joy did not last long. On 9 August 2022 half of my Heart stopped with him. My baby's little heart was no longer beating. My partner and nephew gave me the strength to overcome my grief. But soon after, I got another pregnancy. This time it went great! I just want to tell all mothers and mothers-to-be who are looking for a pregnancy not to give up and not to be discouraged because after the storm there is always the sun and it will be the most beautiful sun you have ever seen.

6. The day we found out that her little heart was no longer beating

First pregnancy ... wanted. And here I am, at the first shot. Here I am, pregnant. This pregnancy started badly right away: losses, ran to the hospital, but the little heart was always there ... until they did a histological examination for alteration of the pap test. They reassured me that it was compatible with pregnancy, but I lost my little one, I lost him two days later. Internal abortion in the eleventh week. The world collapsed on me. They stared at me scraping four days later ... agony. After three months I got pregnant again and now I am waiting for the second ... but I have never forgotten the little bundle I lost during this period.

7. My happy birth after so many pregnancy interruptions

My second pregnancy, much desired, came after 14 years from my first child: the age difference was not sought, unfortunately my first child was born premature and we wanted to give all the attention to him.
When Kevin, the first child, reaches the age of 6, I start to feel insistently the desire to hold a baby in my arms, and, with my better half, given Kevin's progress, we try to peck again. the stork.

8. Silent abortion. Today I am the mother of a beautiful 12 year old girl

After I got pregnant for the first time, on my first visit the doctor told me that I had had a silent abortion. I cried a lot and had to mourn. Now I am the mother of a beautiful 12 year old girl, but I will never forget that little sister who flew away.

Read the whole story of a mother who, after a silent abortion, became pregnant with a beautiful baby girl

9. Spontaneous abortion, from a bad crisis to the happiness of becoming a mother

I've been married for three and a half years. My dream, since I was a child, was to create my own family: a beautiful husband and children. But I had to face many difficulties and I lived very painfully what happened to me. I tell my story to comfort all women who have lost their babies while they were still in their womb.

10. Despite the difficulties I have had three wonderful pregnancies and I tell all mothers to always think positive

After a miscarriage I got pregnant again, but the doctors found me a cyst to remove; my first child was born, I discover that I am still expecting and I have a hint of placental abruption but it resolves well. Finally, during my last unexpected pregnancy, I contracted cytomegalovirus. But also this time I did it and soon my baby will be born.

What does a curettage consist of?

The curettage consists in the revision of the uterine cavity and its emptying, which is carried out after a spontaneous abortion, but also in all those cases in which it is necessary to diagnose and treat different uterine conditions.

When can you get pregnant after a curettage?

Normally, if a child is desired, it is suggested to attempt conception at least 3 months after the curettage. After surgery, in fact, the uterine mucosa of women of childbearing age needs a short period of time to completely rebuild.

add a comment of Curettage: the (positive) experiences of mothers