Dad: most beautiful and touching stories and testimonies 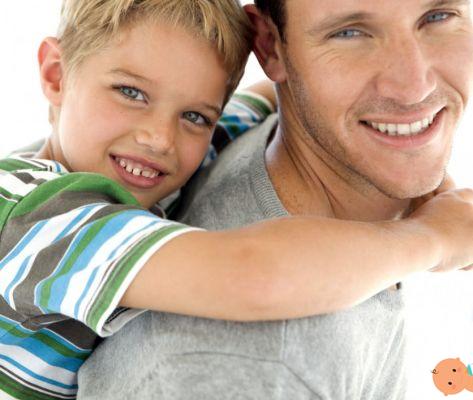 The stories of fathers and children

Exciting, sad, funny stories, but always full of love. There is the story of Salvatore, who abandons his career to devote himself to his son and family, the story of Francesco, the father of a disabled child, the story of Carlo and Christian, two fathers by choice who have adopted twins.

We have collected the most beautiful stories of dads, who tell us their point of view.

Read also: The most beautiful phrases to dedicate to a future dad

A former executive is now dedicated to his family

A courageous but conscious decision: to abandon a permanent position, to become an entrepreneur and launch a startup. All this to be able to be together with the son of a few months and to support his wife in her brilliant international career. It was the decision made by the new father Salvatore Bonanno. This is the story of him.

Read the whole story of Salvatore, who decides to leave his permanent position as an executive to dedicate himself to his just a few months old son

2. Tommi is disabled and Francesco is a lucky father

Diary of a lucky father

Franscesco is the father of Tommaso, a 5-year-old disabled child. Francesco in 2022 opened a blog "Diary of a lucky father". This is the story of him.

Read the whole story of Francesco and his disabled child Tommaso

3. Carlo and Christian, father by choice of two twins

Carlo and Christian are two fathers by choice. In fact, they decided to become the parents of nineteen-month-old twins: Julian and Sebastian. This is their story.

Read the whole story of Carlo and Christian, two fathers by choice

4. The story of Paolo, super dad by choice of six daughters

Paolo, father of 6 daughters, tells us about his choice to leave the profession to follow the family. Here is the story of him.

Read the whole story of Paolo, father of 6 daughters and his choice of life

Luca has become an angel

You see your little man growing day by day. You look at him and imagine him a boy, a boyfriend, a married man, he is a dad. The dream ends abruptly in March 2022, acute myeloid leukemia is the diagnosis of doctors.

6. My partner and I separated because of her psychological violence

A father victim of psychological violence

My company and I got separated because he was doing psychological violence and it wasn't okay for me to live like that. The children lose out and we have a little girl ...

7. "Neopadri", the Youtube channel of a novice young dad

His name is Mario and he is a 35-year-old father. His daughter is called Rachele and she is 11 months old. For some time he has opened a blog and a youtube channel to talk about fatherhood and create small tutorials for new fathers. He was so afraid of not being a good father, but thanks to the videos, the interactions and the posts he is slowly starting to exorcise these fears.

Read the whole story of Mario, who opened a Youtube channel to talk about paternity

8. "Sit down! I have to tell you something ... I'm pregnant!". My experience as a father of two wonderful children

My experience as a father of two wonderful children

A child changes your life, two children turn it inside out like a sock. I would never go back, I love my children and I would be ready to give my life for them right now, but I would be hypocritical if I did not admit that all that glitters is not gold: to change means to adapt, to sacrifice, to spend every day to look after them, putting aside what interests us.

9. I, dad in the delivery room, witnessed a miracle

A dad in the delivery room

I witnessed the birth of my princess Alessia. I recommend it to all next dads. It is a wonderful experience. For the more emotional do not worry: you will be located behind your partner, you do not see anything traumatic. Except your little angel's head.

10. I am a separated dad who loves his daughter and who wants to be her "eyes"

A separated dad next to his daughter

I broke up with my partner a while ago, but I've always been close to my daughter. I paid for everything: from diapers to clothes, even giving a maintenance fee. I decided to take my responsibilities and I certainly did not do anything abnormal, on the contrary I just wanted to offer the means to raise my daughter in the right way and to be for her the "eyes of the world" and maybe a "friend" of she.

11. Love story told by a dad from an extended family

I saw the one who would become my partner when she was 21. I already had a son and she too. Since we met again we started to feel each other, until we decided to be together. She recently gave birth to our baby girl, who is now here with us. We are a big extended family: she loves my son, I love her and I look forward to the moment they come here in Germany, so she will be more serene and happy. I love her so much and her happiness is my happiness.

Read the whole story of a dad and his extended family

12. Pregnancy seen from the eyes of a father

Pregnancy seen through the eyes of the father

13. Who will give back lost time to separated fathers and their children?

The lost time of separated fathers

I am a separated dad. My ex took my daughter 450km away from me. She believed and believes that her children are mothers so much that she tries to put a spanner in the works. She told me she would. Who will give back the lost time to fathers and their children? It takes an ad hoc law and respect, which many exes don't have.

14. Two useful tips from a father to not forget the children in the car

I have three children: for all of them, when they were very young, I took two simple precautions to avoid forgetting them in the car and to avoid any memory deception. The first precaution is the additional mini-rear-view mirror (cost: very few euros) and so it is impossible not to see that you have a baby in the car. The second (free) is to put the work bag with the mobile phone inside next to the child.

15. My first real year as a single dad

My first year as a single dad

It was my first year as a single dad after the marriage crisis that led to my separation. This beautiful adventure, this one-year tale, ends here. I have thought many times about how I could greet those who have read, followed, encouraged, sometimes challenged me (thanks anyway, I love you too). I do this by lining up 10 words that I have learned to use in this first year of my new life.

A blog dedicated to fathers and all the messes they make with their children is online! It is called www.papaimperfetto.com

Read the whole story of an imperfect dad

17. I chose to enter the delivery room: an emotion that I will never be able to relive in my life

A dad in the delivery room

October 3rd was the most exciting day of my life: the day I became a dad and my eyes met my son Morris for the first time. I chose to stand next to my wife in the delivery room and when my son finally came to the light and the nurse put this little crunch on the exhausted mother's chest, there I freed myself with tears that I will always remember.

Male postpartum depression exists, I know it makes you laugh but it exists and it usually happens with the second child, at least that's what happened to me ... For the first two months I had strange thoughts when my second daughter was crying. Then a smile was enough for me and everything changed. Now when she cries I go close to her and try to calm her by looking for the thing that makes me feel better in the world ... that thing that is priceless and no one can / should ever take away ... my daughter's smile ...

19. Commonplaces on the roles of mothers and fathers

"I became a father at a time when everything changes at the speed of sound, but the vision of fathers who have mothers does not seem to have changed, just as that of fathers towards mothers has not changed. We need to rewrite the culture of parenting. starting from scratch, without prejudice ". The opinion of the father blogger Francesco Facchini, that is Sharingdaddy.

20. What does a father do when he is away from his son

Dad and son away on a trip

What does a father do away from a son on a business trip? The difference between parents today and those of a generation ago, thanks to technology.

The March 2022 lockdown seen from the eyes of a dad

A dad tells about his quarantine: this moment taught us to slow down and reflect on the important things in life, and for sure, when everything passes, we will come out changed. Read the story of Patrizio Cossa, of Barpapa   TAG:
Papilloma virus: what the science says ❯

The most beautiful phrases to dedicate to a future dad

Teenage children: when the mother must also play the role of the father

Do dads spend too much time in the bathroom?

add a comment of Dad: most beautiful and touching stories and testimonies