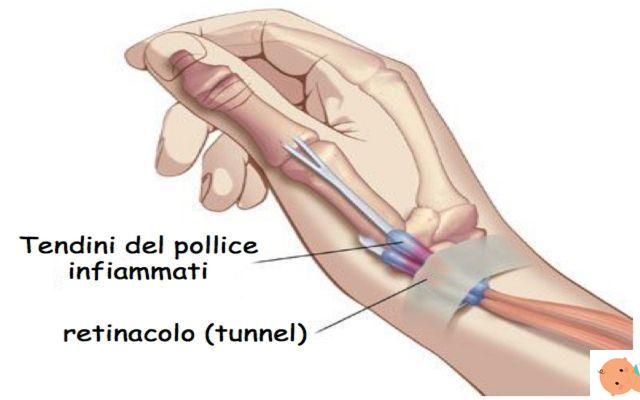 Un severe pain in the wrist, at the base of the thumb, which becomes particularly acute in the moments of gripping, between thumb and forefinger, but also in all normal movements of the wrist, such as rotation, extension and flexion.

“It is precisely this type of pain that characterizes the De Quervain syndrome, also known as “Nurse Syndrome” or of new mothers and grandmothers »explains Dr. Giorgio Pivato, head of Hand Surgery and Reconstructive Microsurgery of Humanitas San Pio X.

What is De Quervain Syndrome

"From a medical point of view, this is theinflammation of the extensor short and abductor long tendons of the thumb: the first has the function of extending the thumb, the second of moving it away from the other fingers »explains the surgeon.


These tendons run inside a very narrow channel, delimited at the top by a ligament, if they become inflamed they become larger thus creating the prerequisite for pain.


Read also: Back pain in pregnancy

“It is hardly a situation that resolves itself spontaneously as a sort of vicious circle: the more the tendons find it difficult to pass under this “ligament”, the more they become inflamed, with a consequent increase in their size ».

The causes of inflammation of the tendons

It is a pain that it can affect many new mothers and that it is caused by incorrect postures and positions taken when holding the baby. In particular, when supporting his head, when lifting him by taking him under the armpits and when breastfeeding him without supports.


“To this we must also add another factor: the water retention, a very pronounced phenomenon during breastfeeding due to hormonal imbalances. This determines the fact that the body retains fluids that accumulate in the sheath surrounding the tendons, making them larger and inflamed »adds the surgeon.

How is De Quervain Syndrome recognized

“The main symptom is a pain that is localized in the wrist at the base of the thumb. It is particularly evident in the gripping movements between the thumb and forefinger, but also in all the movements of the wrist, such as rotation and extension ».

La diagnosis of this disorder is clinic, this means that no tests are necessary, but just go to the doctor. "If a patient suffers from De Quervain's Syndrome, a swelling can be seen at the base of the thumb which, if squeezed, causes pain."

Then there is a specific proof, the test at Finkelstein, which can also be done at home to understand if you suffer from wrist tendonitis: «You put your thumb inside the other fingers closed into fists, then you bend your wrist outwards. If the tendons are inflamed, the patient feels a lot of pain with this movement. "

How De Quervain Syndrome is treated

“In the early stages, treatment involves rest as much as possible and la changing the positions in which the child is held: for example, holding it with the other arm, using the band, avoiding the overload in extension of the thumb by using the arms and hand more as if they were a paddle ».

Alongside this, non-drug anti-inflammatory therapies may be useful, for example:

"Although the indication to solve the problem is to reduce loads and (when possible) rest, some exercises of the upper limb can be very useful to reduce the load on the hand in order to alleviate pain, taking into account that the in any case, the diagnosis is made by the doctor »explains Simona Margutti, physiotherapist and osteopath of the Pediatric Polyclinic of our city.

So here are some exercises to relieve the pain:

“In these cases, it can also be very useful to be explained by a midwife other breastfeeding positions compared to the classic one in order to reduce loads as well as the correct use of the sling can lighten the work of the hands in supporting your child ".


Read also: Breastfeeding positions: the 4 traditional and some you (MAYBE) have never tried

If all these methods and exercises are ineffective, then it is time to contact the general practitioner and then the surgeon to evaluate the possibility of an intervention.

«It is a small operation lasting about a minute, which even pregnant women can do. The roof of the canal through which the tendons pass is opened by making a cut of one centimeter inside a crease of the wrist, so that the scar cannot be seen. The operation takes place under local anesthesia, and from the following day the pain is significantly reduced »explains Giorgio Pivato, Head of Hand Surgery and Reconstructive Microsurgery of Humanitas San Pio X.


«Suffering is useless, because the intervention - which can also be accessed through the National Health Service - is minimally invasive and does not present particular complications or contraindications ".

TAG:
Down syndrome: 21 things to know about this condition ❯