Death in utero: the emotions of a mother for her unborn child 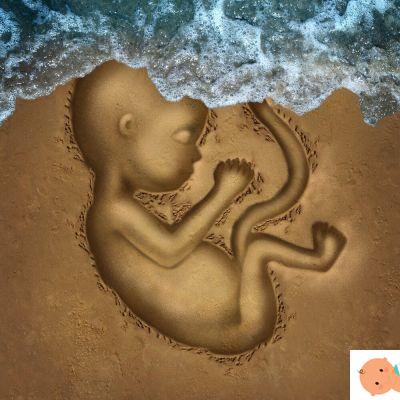 Death in utero, fetal intrauterine death, stillbirth, late fetal mortality, late abortion, perinatal death: there is not even a single term to define a phenomenon that nobody wants to talk about. Because it hurts too much to talk about it, because out of luck every future mother keeps this bad thought away from herself. Because in the common imagination, abortion is what occurs in the first trimester of pregnancy, after which it is thought to have made the halfway point and to navigate in safe waters.

But unfortunately the statistics, reported in the book and taken from Oggiscienza.com, say that “In 2022 in Del Paese, about 1600 children, four every day, died before being born, in the third trimester of pregnancy. Four families - one in every 350 waiting - faced the tragic and unexpected event of stillbirth every day, along with another 7200 families around the world. In 2022 alone, two million and 600 children died like this and half of them during childbirth, a breath away from the possibility of being welcomed alive in the arms of mum and dad ”.

How to face, go through, process and overcome such great pain?

The author does not give a 'magic recipe', because there is not. With her novel he simply wants to retrace the story of a child who, at the eighth month of life in his mother's womb, stopped living without a 'scientific' reason. And the story of her mother Valeria, starting from her dreams as a girl, her falling in love with the man with whom to build a new family, the projects made together, the expectations for that life that was growing inside her, up to the clash. with the harsh reality and the effort of living with his feelings of amazement, pain, anger, disappointment.


With the same delicacy and the same respect used by Silvia Gianatti, we try to tell the book through some reflections contained in its pages, in which each of us can find himself. Because, says the author, "it is a cathartic book, which in addition to pain tells the ability to get up and start over".

It is a pain that cannot be kept inside, but a way must be found to bring it out. The novel is written in the form of a diary, which, according to the protagonist, her psychotherapist suggested that she write, to give voice to her feelings, to throw out what was trapped inside her heart. Even if it's not easy at first.

“What's the point of writing to you? Really, what's the point?
The doctor says I have to throw away all the evil I have inside.
If I did, there would be nothing left of me. "

Talk about it with your partner, with a person you trust, but also with an expert, who knows how to deal with the situation. In fact, sometimes you risk doing or saying things that can hurt even more or give the impression of not understanding at all what you are feeling. The conclusion of the book is not by chance entrusted to Claudia Ravaldi, psychiatrist and mother, founder of Ciao Lapo Onlus, an association created to offer support to the so-called 'interrupted parents'.

Claudia, who lived the experience on her own skin, explains in fact that "it takes time, you need personal, social, cultural tools, you need the strength to ask for help and the strength to accept it". And all the strategies must be put in place to process what is a real bereavement, not just a 'bad experience'.

“Stop saying sentences of circumstance. Silence is better. There are no words that can help me. "

When such a tragic event occurs, the first question that arises is: where did I go wrong? What have I done? Could I possibly have avoided it? Sometimes there are medical causes, but often it is not possible to predict or prevent: "Every ultrasound has been perfect, the exams have always been regular. I'm sorry, but I didn't do anything wrong. And neither did you" says the gynecologist in the book.

“I wonder if this isn't punishment.
A way to tell me you can't have it all.
That my time of happiness has run out.
What did I do wrong?
... What if I could have saved you? "

The abortion seems to be only that of the first trimester and instead, when we start talking about it, it turns out that everyone has a friend or an acquaintance to whom it has happened. If we do not talk about it, it is because no one wants to know, but, the mother says in her diary, it is even more painful because you cannot pretend nothing has happened or not tell it, because everyone has seen the belly, everyone knew and everyone, if have not been informed of what happened, they will ask you the terrible question: was he born? And at that point the only deso would be to disappear, never leave the house, so as not to be forced to answer, to tell how it really went.

“I'm not saying losing it at the beginning is easy, but if nobody knows it yet, at least you can avoid it. If you get to eight months they know. And you have to explain it to him. Don't ask me anything. Shut up."

Do another one now?

In clinical practice it is found that after an abortion one is more fertile, perhaps because there is a hormonal situation favorable to conception. On the times to wait before trying to have another child, there are no valid advice for everyone: there are those who could experience it as a 'betrayal' to their lost child, who as a way out to start living again, to impose themselves on to move on

"Don't worry. The uterus has a good memory.
She will get pregnant again, it usually takes three months.
As if you who were not born had never really existed.
I don't want another child. I want you."

Give yourself time, doing what you feel like doing

Everyone gives their advice, but the best advice is to take the time to do what you think will make you feel better. Time to cry, to be silent with your thoughts, to mourn.

“Sometimes I still feel the movements in my belly.
For a moment it's as if I don't remember.
I put my hand on my belly.
And there is nothing. "

Get support in the hospital

The protagonist of the book says it in several places: in general hospitals are not organized for this type of event and we find ourselves having to give birth - because after a certain gestational age the child must be born exactly as if it were alive - in the same ward in where there are other women who happily hold their newborn in their arms. It is a cruelty that should be avoided. The woman, the couple must not be left alone with their pain.

“Explain it to me well. Take us by the hand. Tell us what is happening to us. Help us. Help me."

In the early days Valeria excludes her partner from her life, because she does not feel understood, because she knows that he too feels pain but does not know how to console him, because he refuses to start living again and is almost annoyed by his attempts to get up and raise her again. Because she believes that only she knows what he really means.

“I know his heart is broken too.
But I can't fix it.
He doesn't know what it's like to have you inside for eight months.
Or maybe yes? ”

As the pages of the book scroll, Valeria gradually begins to see some glimmer of light again. Thanks to her psychologist, who guided her in the path of crossing and accepting her pain. Thanks to her diary, which she makes her find a dialogue with her child and with herself. Thanks to her mother, who stands by her without asking her anything. Thanks to the Ciao Lapo association, where she finds other 'interrupted parents' and she feels less alone. And thanks to her partner, who waits for her with so much love and patience and respects her silences, her absences, her darkness. Until they reunite as a couple. Deeply changed but united again. In pain and in love.

“It's us again, completely changed. Together. Trying not to be afraid. Or to accept that we will have it forever " TAG:
Morula, what it is and how it turns into a blastocyst ❯

add a comment of Death in utero: the emotions of a mother for her unborn child