Development of the embryo 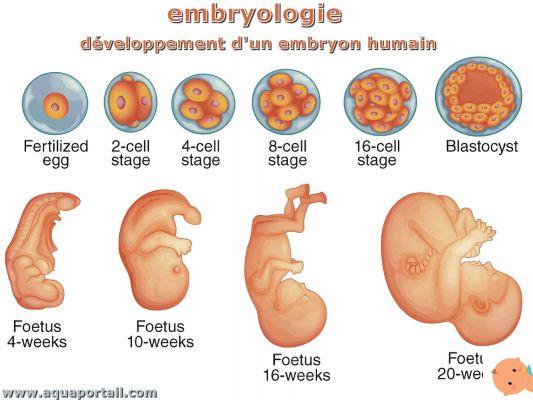 La fertilization it usually occurs in one of the fallopian tubes. It is a complex process, but basically it consists in the penetration of a sperm into an egg cell.

What you get is a new cell called zigote, in which the chromosome kit normal for the human being, consisting of 46 chromosomes: 23 from the sperm and 23 from the oocyte, for a total of 23 pairs of chromosomes (the gametes, in fact, have only half of the chromosomal set).

The zygote immediately begins to divide to give rise to the embryo.

The division of the embryo

In the first days of development, the zygote divides rapidly, each time doubling its number of cells, initially called blastomeri, while the developing embryo continues its journey towards theuterus. From one cell we pass to two cells, then to four, eight, 16 and 32.

At the 16-cell stage there is the so-called morula, which enters the uterus about three days after fertilization.

About seven days after fertilization, the blastocyst attaches itself to the endometrium, the tissue that lines the inside of the body of the uterus. The trophoblast now grows rapidly, drawing nourishment from the glycogen-rich liquid (a complex sugar) secreted by endometrial glands, which were formed under the influence of progesterone produced by the corpus luteum. The trophoblast splits into two layers, one of which forms projections that invade the endometrium in order to firmly fix the blastocyst inside the uterus. This whole process is called plant.

The trophoblast and the surrounding tissue containing the embryo are called chorion. The latter will later develop to give rise to the placenta, which relates the growing fetus to the mother's circulatory system.

Consultation by Prof Carlo Flamigni, surgeon, freelance professor in the obstetrics and gynecology clinic, member of the National Bioethics Committee.