Development of the newborn, when he learns to grasp objects 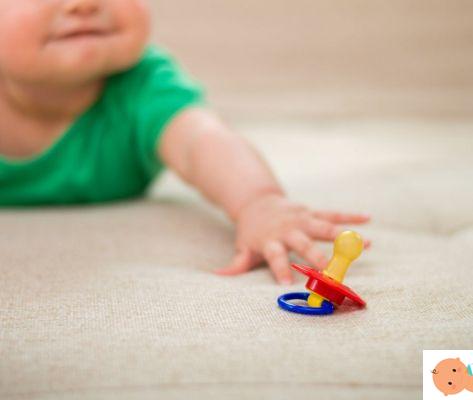 When the child learns to hold things with his little hands, he also begins to play. Being able to grasp objects is also a first step, for the baby, on the path of autonomy, which will lead him to read, write, draw, eat and take care of himself.

The newborn has an innate ability to grasp objects, but it takes him at least a year to develop coordination and to collect and hold things firmly in his hands. Generally, the baby begins to work intensely on this skill in the first three months of life and makes great strides with each passing month.

Let's see how the ability to grasp objects develops in newborns, in relation to the various months of life.

Read also: Development of the newborn, how his understanding of words and concepts evolves

Babies are born with a reflex that allows them to grasp objects: if you touch the baby's palm, he will roll his little fingers around yours. These movements are instinctive and involuntary during the first eight weeks.

During this time, the baby's hands will mostly be clenched into fists, but soon it will also start opening and closing them on purpose. She might also try to grab softer objects, such as a stuffed animal.

Read also: The second month of the newborn

The child still cannot grasp what he wants precisely. He is developing his hand-eye coordination: notice the things he would like to keep and try to reach them.

To help him, you can get yourself a small "gym" to put on the floor: your child, lying on a soft mat, can touch and play fun objects hanging above him.

Read also: The third month of the newborn

At 4 months, the baby can grab large objects. He is still unable to grasp smaller objects, such as peas, until he develops better finger dexterity.

Just before the first tooth comes out (usually between 4 and 7 months), the baby will start grabbing objects here and there so that he can put them in his mouth. He won't be able to hold a teaspoon still, but he'll try.

He can drag things towards him and start moving objects from one hand to the other. It is advisable to keep valuables out of his reach from now on. AND make sure the house is childproof: make very small objects disappear (which could cause suffocation if swallowed).

Read also: The ninth month of the newborn

Finally, with little effort, the child can now grasp objects. And his preference for left or right hand is emerging, although he won't be able to tell them apart until he's at least 2 or 3 years old.

He's also perfecting his own "pincer grasp", which allows him to pick up small objects between his thumb and forefinger.

With better coordination, will soon be able to experiment with using a spoon or fork during meals, although it could happen that he sometimes holds the utensil in one hand, while using the fingers of the other to eat.

You will probably need to help him hold the spoon or fork when you show him how to use them: he will understand more quickly if you let him take a few attempts at each meal.

Once the child has perfected the grip, the throw will not be outdone, so be careful: many children love to throw their toys. When he is one year old, he will enjoy playing and throwing the ball, stacking towers and hitting objects or games.

By the time he is 18 months old, his artistic side will emerge and he will be fascinated by pastels and their use for drawing and writing. At 3 he will have enough coordination to try to write down letters and maybe even write his name.

The role of parents

To stimulate the reflex that causes the child to grasp objects, try putting a toy or colored object slightly out of his reach and encourage him to pick it up. Don't frustrate the little one though by putting him too far away. Give the child plenty of items that he can easily grasp, such as plastic rings, soft toys, etc.

Later, while he is refining his "pincer grip", encourage him to pick up soft snacks, like cooked peas and carrots, at least until he masters the teaspoon. To avoid choking, it is advisable to keep hard foods (such as raw nuts or carrots) away from him.

By the time she's 18 months old, she'll find she can put a lot of items she grabs into other things. You can help him develop this skill by giving him items to put in empty boxes, plastic cylinders, or other containers.

If the baby between 2 and 3 months does not seem interested in a toy you put in front of him, if between 3 and 4 months he does not grasp the object or does not try to touch it, discuss your concerns with your pediatrician. Premature babies can achieve this and other milestones later than their peers.

Read also: How to stimulate the psychophysical development of a child, from 0 to 2 years

Source for this article: www.babycenter.com

TAG:
Development of the embryo ❯

add a comment of Development of the newborn, when he learns to grasp objects