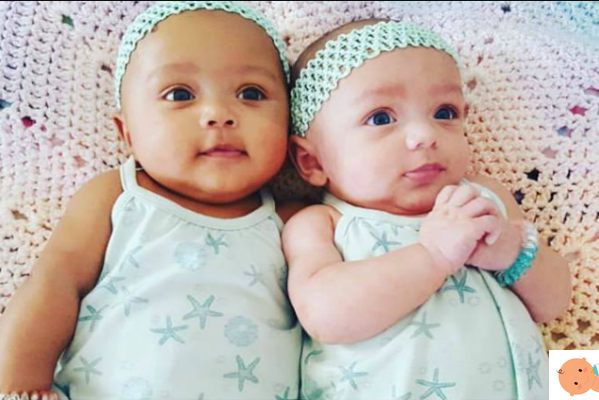 When a year ago the young Whitney Meyer was in the delivery room to give birth to her twins, the woman was very surprised to see how the second born, Kalani, had a significantly lighter skin color of the little sister born a few minutes earlier (Jarani).

“When Kalani came out I immediately thought she was suffering from albinism because she was all white - Mum Whitney told People - I asked my doctors but they said "No!", so I thought that over time she would have a darker color, but she didn't! "

The twins Jarani and Kalani in fact represent a very rare biological case in which the two girls inherited from their parents different genes responsible for skin colorations: Kalani has taken the whiteness of the Caucasian mother, while Jalani possesses a gorgeous shade of ebony like the African-American dad Tomas Dean.


The family square is closed by Talan, the older (Caucasian) brother Whitney had from a previous relationship.

After a year of life, mom and dad realized that the color of their daughters' skin it's not the only difference that distinguishes them:

"Kalani is lively and energetic, while Jalani always wants to be in her arms - says Whitney - While Kalani crawls and slips everywhere, her sister doesn't want her to be placed on the ground!"

To celebrate their first year of life, the family gathered friends and relatives around one fantastic cake which well represents the two "multiethnic" twins. In fact, at the foot of the cake, the parents had two sugar sculptures representing theirs arranged two little princesses: one as light as cream, the other as chocolate!

Read also: how to organize the first birthday party

He black, she white. And the children? Pictures of the rainbow family

The Giddings are a very special family. Four children, four different colors of balls. Here are their pictures.

TAG:
Siamese twins united at the separated head to the Baby Jesus ❯