Discover the sex of the baby with the Nub Theory 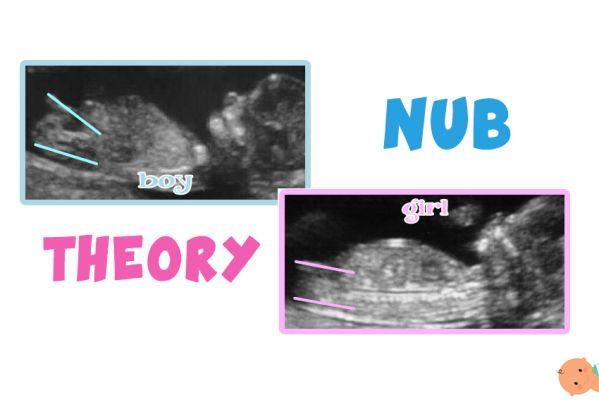 Nub Theory: what it is

The genitals of a fetus differ from the 30th week of gestation. In boys the abutment of the genitals points upwards, forming an angle of about 12 °, in girls it remains almost parallel to the spine. By evaluating the lumbosacral angle and the cutaneous angle of the genital tubercle, a professional in the sector is able to define the sex of the fetus early. The Nub Theory is therefore a theory of scientific basis that allows to identify the sex of the fetus as early as the XNUMXth week.

Statistics show that with this theory there is a 75% chance of determining the correct sex of the birth already at the 12th week and 95% only at the 13th week. The recognition of sex takes place through the observation of the external genitalia which up to the 9th week are the same for both sexes but from which they then begin to gradually and completely differentiate at the 14th week. Hoping that the child will cooperate assuming a position that allows observation, the lumbosacral angle and the cutaneous angle evaluated in the mid-sagittal plane of the fetus are taken into consideration.

Nub Theory: how it works

According to Nub Theory, the sex of the child is understood based on the angle it forms with the external genital:

To actually apply Nub Theory to your baby's ultrasound, you need to photograph him with a clear profile so that the length of the spine is visible horizontally. From there, you need to look for a bump, or small nub, where the legs are. If your baby's bump is angled 30 degrees higher than his or her spine, this indicates that your baby is a boy. But here the first doubts arise: how exactly is a 30 ° angle formed on an ultrasound?

In a small 1999 study, researchers analyzed the tubercles of babies in 172 pregnancies, determining whether the angles were greater than or less than 30 degrees. At 11 weeks, there was 70% accuracy in determining sex, and by 13 weeks that number had jumped to over 98%. Similar results were found in a 2006 study, with a sample size greater than 656. However, in a larger study from 2022, accuracy was much lower, although it increased over time with increasing gestational age. . This suggests that waiting longer to determine gender leads to more accurate results.

So to be sure of the sex of your child it is better to wait for the morphology or do a special blood test. Only in this way will you be sure if a boy or girl will be born and you will not have any surprises at birth!