Do babies and toddlers have a sense of humor? 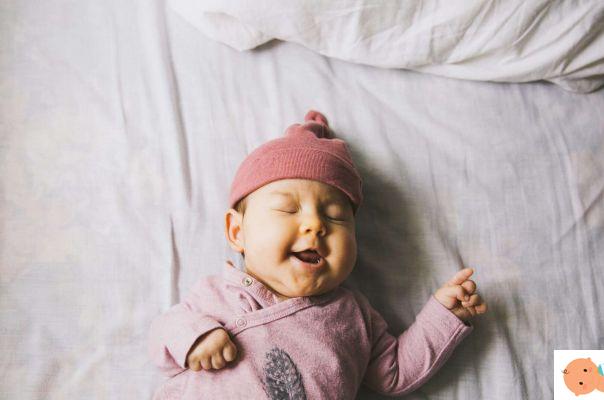 Sense of humor babies and children

New parents can't wait to catch their child's first smile. For some, seeing children laugh seems to be the panacea for all ills. Today we talk about the sense of humor babies and children: they have it? When do they develop it?

The laughter of babies

For a long time, it was believed that newborn smiles were involuntary, a consequence of uncontrolled muscle reflexes. However, some studies have shown that in the first weeks of life the baby is capable of to smile as a response to a smile, to the appearance of someone or even to well-being (feeding, poop ...). But when thehumor, that is, the ability to laugh at funny things?

Read also: The smile that enchants every mother

If you think the little ones don't have sense of humor you are very wrong: think of your child of a few months who, at your cuckoo, laughs heartily. Or the laughter you provoke from the dog jumping around the room or licking his foot. Research from the University of Bristol has indeed shown that already to a month children are able to react to humor, such as for example jokes. A good part of the babies - about 50% - arrive at two months instead.

Indeed, even before a year, half of the children analyzed for the research showed that they know how to produce forms of humor, trying to stimulate the laugh others.

How humor develops in children

In reality, humor in children it is something that develops over time and goes hand in hand with theirs growth. If at first they are able to react to stimuli sound or visual, little by little the situations that trigger a reaction on their part become more complex. As soon as they develop the language, then, they begin to use it just to entertain, imitating the grown-ups: at the age of three they already know how to distinguish puns. Does your child say poop all the time? It's because he knows he's going to get a laugh!

However, it happens that, despite the laughter, children do not understand humor. This is a condition typical of some neurodivergenti, such as autistics (even those with a diagnosis of Asperger's Syndrome) or those with high cognitive potential.

Often, these children use humor with great skills from an early age, but paradoxically they do not understand the jokes of others, taking everything literally. If your child doesn't understand your jokes, don't worry! Moreover, even for those with a "neurotypical" brain, understanding the irony is not at all easy: a study has shown that the effort made by the mind to understand the jokes is really important. The zones that are activated to understand the sarcasm they would be three, but if one of the three doesn't work, the joke doesn't pass!

Ultimately, children begin to develop a sense of humor already as newborns, around a month of life, responding to the puzzles of adults, to jokes, to animals. As they grow up, they continue to capture humor in others and develop their own, trying to stimulate others to laugh. In practice, a sense of humor is a learning path that reaches its peak at the age of 4, when children are now masters of language and able to understand others well.

The Early Humor Survey (EHS): A reliable parent-report measure of humor development for 1- to 47-month-olds

TAG:
Babies and hot: do not cover prams and strollers with a sheet! ❯

add a comment of Do babies and toddlers have a sense of humor?