Dogs and children, here's how to avoid the risk of bites 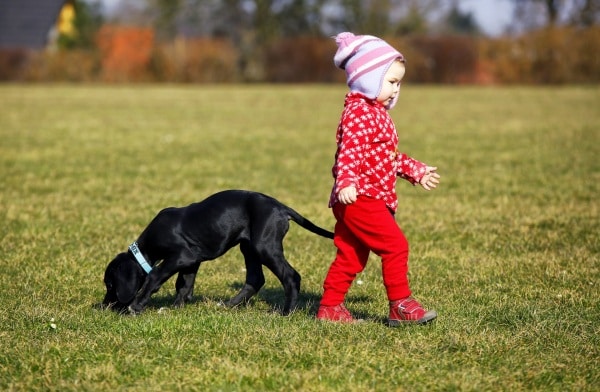 The chronicles often refer to children being bitten by dogs, with sometimes very serious or even fatal results.

In the vast majority of cases, it is dogs that bite, or perhaps grandparents or friends, who are generally considered mild and good.


The good news is that these accidents can easily be prevented: just follow a few fundamental rules - for example, never leave children alone with dogs - and learn to get to know our four-legged friends better. We talk about it with Franco Botta, a behavioral veterinarian in Loano (SV) and in Liguria.

Why does the dog bite

"The bite is a natural behavior, which the dog basically uses to say no. Or, better, to reiterate it forcefully "explains Franco Botta. So, the first indication to reduce the risk of" accidents "is know what can cause a dog to bite, to limit the circumstances in which the animal might react in this way.


There are several factors that can trigger a bite. For example:

"Generally the bite does not come by itself, but after other signs of rejection, such as the attempt to move away and the growl," Botta points out.

Can the dog bite out of jealousy?


A dog already present in the house, a newborn who arrives and, after some time, the tragedy: the dog that bites the little one. Can we speak of jealousy in these cases? "Jealousy is a very human feeling, I'd rather speak of rivalry"says veterinarian Franco Botta.

"If after the baby's arrival things change drastically for the worse for the dog, the animal could interpret the new situation as a unjustified diminution of rights and privileges that until recently they were granted ".

"However, this does not mean that he will wait for the first good opportunity to 'take revenge' by biting the child. Quite simply, this situation could induce one state of stress and frustration maybe ready to explode in particular critical moments ".

What to do, then, in these cases? "Remember that the dog continues to be part of the family and it cannot be put aside overnight. As far as possible, we should try to minimize changes in his routine and avoid moving him away whenever the child is also present, so that he does not experience him as an enemy. "

How to reduce the risk of accidents at home

Often children bite are their playmates: the dogs of the house, grandparents, friends. Here's how to prevent that from happening.


1. Have respect for the dog (and teach it to children)
Respect is the fundamental starting point of every relationship, even that between a dog and a human being. A dog is not a toy which can be "spupazzato" at will (and then perhaps abandoned in a corner when you no longer feel like it).

It is a being sentient, and sometimes it would be enough to try to put yourself in his shoes to understand how it is best to behave. "A trivial example: when we sleep we don't like being awakened. Why should a dog like it?" asks Botta. "Still, we allow our children to pet the dogs when they sleep, because they are so tender and cute."

2. Never leave your child alone with a dog
Even if they are playing peacefully, and the dog is generally "very good", a child should never be left alone with him. In the meantime, to check that the little human does not do anything that can annoy the animal, and in any case because it is not able to interpret any signs of discomfort.

"Parents often overestimate the ability of children to be with animals, but at least up to six years, children are not at all able to 'read' the emotions of a dog, to understand if he is angry or afraid "explains Franco Botta." And even later, up to 7/8 years, taken by the heat of the game, they may not realize that maybe a problem is arising, that the dog is showing discomfort and he would like to be left alone. ”In other words, they can't stop in time if the game degenerates.

3. Even in the presence of adults, do not let children play with dogs for too long
"A good rule of thumb is do not exceed XNUMX minutes of games, always under the supervision of an adult "advises Botta. Of course, a lot depends on the dog - some are more tolerant, others less - and on the type of game the child is playing, but after 15-20 minutes the interactions could become dangerous .

"Maybe the parents trust them because they know they have a mild, very tolerant dog. But in the presence of some additional environmental stress his degree of tolerance could drop"Botta explains. Let's take the heat: it is not enough by itself to make a dog angry, of course, but it may be that I make him sleep badly, which in the long run can reduce his ability to bear stress. Thus, the small and common ones. "torments" caused by a child may become less tolerable than usual.

4. Check that the children do not bother the animal
Children don't always know how to control themselves, and games that seem fun to the dog become little tortures. It is therefore very important to teach children that even the best dog in the world some things just don't have to be done. For example:

5. Learn about the dog's signs of discomfort, also teaching them to children
The bite hardly arrives like a bolt from the blue: it is more often thefinal act of an exasperated animal, who no longer knows how to express his discomfort. For this, it is important to know the preliminary signs che there is something wrong, that the dog is fed up and would like to be left alone. Here are the main ones:

6. Get to know the house dog and its development stages
The dog is often a child's playmate par excellence. And they can actually make great company and have a lot of fun together. But you need to know that dog and baby do not grow at the same rate, and that at various stages of life a dog has completely different needs.

"Puppies really like physical contact and love caresses, but as they grow up they appreciate them less and less. Of course, there are more or less affectionate dogs, but basically adults don't really like being caressed too much"says the vet.

Another example: the puppy dog, that is practically adolescent, knows how to control itself less than an adult dog, as if it lost patience more easily.

And again: if in his first years of life he plays the role of playmate, growing up he tends to play that of adoptive parent. "Basically, he can engage in nurturing behaviors, such as licking the baby, but also nurturing and guiding, and then he can bite the human cub if it seems to him that he is doing something wrong. Just as he would his puppies for. address them ".

How important are the races
There are breeds that have a very bad reputation. We think of pit bulls, Argentine dogo, rottweilers. They are assumed to be aggressive and out of control, but that's not necessarily the case. Much depends on the type of education they have received and the type of relationship they have established with their human companions. For Franco Botta, pointing out some breeds as dangerous, automatically acquitting others is counterproductive. "On the one hand, it can de-responsibility, as if the problem of a dog's aggression depended only on its genetics, on the breed to which it belongs. And on the other hand, it can induce a sense of false security. Instead, each dog must be evaluated individually, it must be understood how demanding his character and temperament are".

Without forgetting that, beyond the race, size is always important. "The bite of a Chihuahua is unlikely to cause serious damage, while that of a Labrador, which also usually has a sweet and mild character, can leave very serious consequences".

How to reduce the risk of accidents outside the home, with unknown dogs
Often children cannot resist: in front of an unknown but tender and nice looking dog they run to caress it. The dog, however, may not like and react badly to the attempted contact of the little one. Here's how to avoid accidents with other people's pets.

1. Teach the child a always ask if it is possible to pet the dog. Maybe the answer is no: well, it doesn't have to be a problem. It is just a way that the dog owner has to defend the welfare of his pet (which may be very good, but does not have great pleasure in being stroked on the street) and the safety of those who would like to touch it.

2. Teach him to approach gently, without shouting and letting your hand sniff.

3. Make sure the baby do not abuse the possibility of touching the animal. "A caress or two to an unknown dog may be enough," explains Botta. "This is a greeting, not a play or cuddle session, which must be reserved for known dogs."

TAG:
Dogs and children: the most suitable breeds? ❯

add a comment of Dogs and children, here's how to avoid the risk of bites