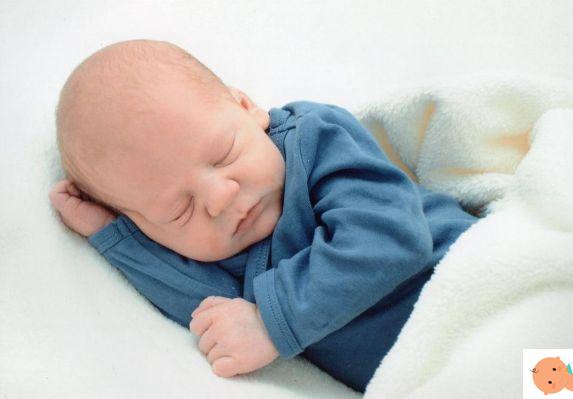 Rivers of words flow around the dreams of a newborn. Advice, testimonies, manuals and anecdotes that have legendary roots on the right sleep of the small child often lead to the sole consequence of returning sleepless nights to disoriented and a little apprehensive new mothers and fathers or, worse, of disturbing the unrepeatable harmony that parents and children try to establish the rhythms of a new coexistence.

A rest period regulated by time or free without external interruptions is a dilemma that grips the adult struggling with a newborn in its first three or four months of life when other activities still do not become part of the structured way to mark the day of the little one. . Are there situations in which it makes sense to wake the baby up while he sleeps? We talk about it with Luca Ramenghi, director of UOC Neonatal Pathology of'Giannina Gaslini Institute of Genoa, extraordinary professor of Pediatrics at theUniversity of Genoa and Founder of the association I-Brain, for the promotion and research on the problems of perinatal neurology.

"On the theme of sleep there are elements such as traditions, preconceptions, advice that come from a thousand sources, more or less verifiable and capable of influencing parents - the neonatologist said -, as if there was a need to say something anyway when another human is born , especially if you already have an experience. The effort of modern medicine is to have indications as much as possible related to the so-called Evidence Based Medicine, medicine based on evidence of efficacy and that of sleep is a field lacking in illuminating studies. , we must think about how effective we intend to obtain with respect to the sleep of the newborn. The priority of the first two or three months of life is the verification of a welfare ed neonatal efficiency, which mainly translates into good growth ".

Read also: Sleeping babies, what to do if they can't sleep well

Wake up babies for feeding

"In the first two months of life, the will of the infant baby itself is little, the brain seems to be regulated by subcortical mechanisms as happens for example for sucking, - continues the specialist -. It is a kind of pleasure, to push first and foremost the little one in this gesture can almost always be evoked especially in the first weeks. At the same time, the efficiency of the sucking is a sign of health and well-being: this innate and inexhaustible vigor in sucking is decreasing, so much so that even growth usually slows down over the months to follow, especially in breastfeeding sonno perhaps it should be inserted in this context of well-being, in a correspondence in which we support a more natural attitude because it is difficult to find a rational way to accurately indicate the times of the baby's sleep, especially if breastfed ".

It is therefore not necessary to wake the baby up, but it is important to keep in mind what can promote its good sleep: "Do not suffer from intestinal disorders also, like the simple ones of the infant's colic, it helps to sleep more hours with peace of mind. Don't stay at fasting for a long time it is a frequent concern but perhaps not scientifically solid. In one of our studies we are trying to understand the trend of blood glucose values ​​in hospitalized infants, monitoring them with a subcutaneous system that allows to continuously detect parameters and we are highlighting that night fasting is well tolerated, although we are waiting to be able to give definitive data. It should be noted that we are talking about hospitalized pathological infants. Furthermore, we must not see sleep as a separate compartment in the well-being of the infant: we reiterate that very often correlation between indigestion and infant sleep it is managed by worrying about the quality and quantity of sleep when perhaps it would be more effective to understand how to intervene on colic and reflux. Good digestion promotes a more desirable sleep for naturalness and tranquility ".

Children's sleep, what to watch out for

"There are situations where it may be indicated to go beyond natural observance - clarifies Ramenghi -:

The good sleep of the newborn does not respond to specific indications that can guarantee when it is necessary to resort to supervision and when not. There are no formulas valid for all parents and for all children ".

When to educate your newborn to sleep

There comes a time when you can begin to wake up the child, by virtue of the beginning of a period of life in which rules must be made that help the child to grow well.

"Starting from the third month, in a logic of starting to give rules, or at least trying to do it, it is possible to try to educate the little ones to sleep regularly - explains the doctor of Gaslini -. This should not be seen as "violence" as the rules serve to grow. Starting to establish rules is also part of the modern style of education so dear to the principles of the gods first thousand days of the child's life, a period in which the influence of the children's character is also greater. In any case, it is not possible to establish what should be done with newborns by providing univocal suggestions because each child will have its own peculiarities that cannot be superimposed on other situations. The aid of the melatonin, for example, it can be expected and is acceptable in specific circumstances but must be evaluated from time to time. Several studies have also sought evidence on the correlation between number and depth of postprandial naps with the quality and durability of the night sleep: the result is that there are conflicting data for which it is not possible to generalize. In the first two or three months of life, sleeping a lot during the day is indicative of a small child who is well and does not feel discomfort, a quality sleep during the day automatically translates into a prolonged sleep even at night ".

The interviewee is Professor Luca Ramenghi, director of UOC Neonatal Pathology of the'Giannina Gaslini Institute of Genoa, extraordinary professor of Pediatrics at theUniversity of Genoa and Founder of the association I-Brain, for the promotion and research on the problems of perinatal neurology.

Sleeping bag: 7 things to know before buying it

Lullabies and relaxing music for the newborn

Are the bumpers on the cot safe?

add a comment of Don't Wake Up Babies: Truth or False Myth?