Early ectopic pregnancy symptoms: how to recognize them and what to do 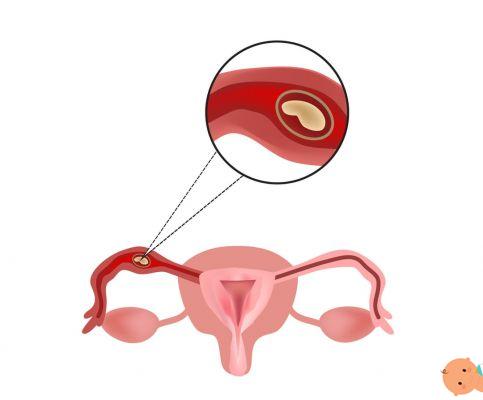 In a normal pregnancy, a fertilized egg travels through one fallopian tube up to the uterus, where it attaches to the uterine walls and there it will grow into a fetus. But in an ectopic (ectopic) pregnancy, the fertilized egg implants itself somewhere other than the uterus, most often in the fallopian tube (and for this reason it is sometimes called tubal pregnancy) In rare cases, the egg implants itself in an ovary, cervix, or belly. There is no way to save an ectopic pregnancy: it will not be able to turn into a normal pregnancy and it is necessary to intervene promptly because it can damage the tube and cause heavy bleeding that could be fatal. Let's see together what are the symptoms of an ectopic pregnancy.

How to recognize ectopic pregnancy

Il vaginal bleeding related to ectopic pregnancy it is slightly different from menstruation: it is brown or dark red in color, a more watery consistency and it stops and then resumes. We remind you that in the first days of pregnancy there may be small losses from implantation (spotting) caused by the nesting of the embryo in the uterus, but these are small losses that must be reported to the doctor.

Abdominal pain caused by an ectopic pregnancy typically runs low on one side. It can develop suddenly or gradually and can be persistent or come and go. Many factors can cause stomach pain, but if the pregnancy test is positive or you think you are pregnant, such pain should always be reported to your doctor.

Pain in the shoulder blade

This pain generally occurs where the shoulder ends and the arm begins. It is caused by internal bleeding caused by ectopic pregnancy that affects the phrenic nerve, located in the diaphragm.

Discomfort when going to the bathroom

Pain may occur when urinating during bowel movements, and some women may experience diarrhea.

Rupture of the fallopian tube

In some cases, an ectopic pregnancy can grow quite a lot from damage the fallopian tube. The ruptures are very serious and it is essential to intervene surgically as soon as possible. Symptoms of tuba rupture are:

How long can extrauterine pregnancy last?

Generally ectopic pregnancy it does not exceed the sixth-tenth week because the structure that contains the embryo breaks down and there are no conditions to ensure the embryo nourishment and growth.

Read also: Beta hCG: what it is

How betas grow in an ectopic pregnancy

Even if the ectopic pregnancy cannot proceed beyond the first few weeks, the production of the beta HCG hormones does start.

Then a pregnancy test, performed after a menstruation delay, will give a positive result. In a normal pregnancy, the Betas double every 48 hours, while in an ectopic pregnancy, they increase more slowly. However, it is difficult to make this assessment alone home pregnancy test. For this it will be necessary to take a blood test to monitor the growth of Beta.

Since in a ectopic pregnancy Beta levels grow more slowly than in a physiological pregnancy, it is possible that a pregnancy test, especially if done too soon, is negative, as well as an ultrasound performed in the first weeks. So where there is a delay in menstruation and other classic symptoms of pregnancy, but with a negative test, the only way to diagnose an ectopic pregnancy is in laparoscopy.

In 70% of cases, the ectopic pregnancy resolves spontaneously with a miscarriage in the first month of gestation.

Post vaccine symptoms in children (also post covid vaccine): what they are and what to do if they occur ❯

add a comment of Early ectopic pregnancy symptoms: how to recognize them and what to do