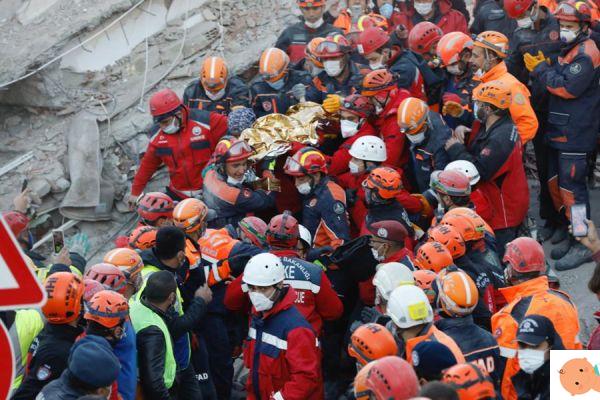 After almost three days, the little girl Elif Perincek, a 3-year-old Turkish girl was pulled alive from the rubble. The little girl was trapped in the debris of the building where she lived in Smyrna, which collapsed following the earthquake last Friday in the Aegean Sea.

A rescue 65 hours after the earthquake

"When I reached out my hand, she took it and never left it until I took it to the rescue tent," Muammer Celik, the firefighter who rescued the little girl, told local TV. 65 hours since the earthquake. "His eyes were open and her arms were moving. After seeing Elif's smile, we couldn't hold back the tears of happiness," said firefighter Ahmet Yavuz.

The images of the rescues are making the rounds in the Turkish media (we embed the BBC tweet in Turkish below).

Elif was there 106th person to be saved from the rubble and taken to the hospital.

23 hours after the earthquake, Elif's mother and her brothers were also recovered. Mother Seher Dereli Perincek and her 10-year-old twin brothers Ezel and Elzem Perincek are now under observation. Meanwhile, his 7-year-old brother, Umut, couldn't survive his injuries.


Read also: What to do in case of an earthquake

Rescuers continue to dig tirelessly among the rubble, from which noises still emerge that give hope in the presence of more survivors.

Last Friday the earthquake in the Aegean Sea

The toll in Turkey of last Friday's 6.6 magnitude earthquake in the Aegean Sea is still worsening. There are 83 confirmed victims in the western province of Smyrna, while 962 are injured. Of these, 219 are still hospitalized and 4 are reportedly in serious condition.

Earthquake: what to do in case of tremors?

"Get down, shelter, hold on" it is the most appropriate procedure to follow to protect yourself during an earthquake.

It is better not to rush towards the stairs (they can be the weakest part of the building), nor to use the elevator (it could get stuck), but take shelter in the opening of a door inserted in a load-bearing wall, or under a tableaway from windows and furniture that could fall, protecting your head and neck with your hands and arms.

It is also better to first identify the safest points in your home where you can shelter during a possible shock.

Read also: Things to do before, during and after an earthquake TAG:
Modular systems in strollers: what they are ❯

add a comment of Earthquake: 3-year-old girl saved after 65 hours