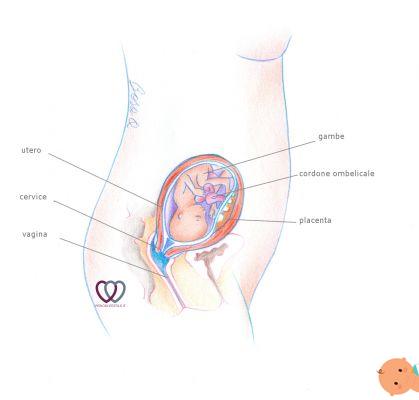 A transition phase in which the baby begins to perfect his nervous system and the future mother learns to live with the burden of the baby bump. With the scientific advice of the gynecologist Elisabetta Canitano, president of the non-profit association Vita di donna, let's see what happens to the body of the woman and that of the child during the eighteenth week of pregnancy.

At this point in pregnancy, the most annoying symptoms have normally been left behind, but they could give way to other physiological effects due to the enlargement of the fetus in the belly and to the continuous hormonal changes. In addition to tiredness, it is in fact quite common to feel more fragile and subject to bone and muscle pain.

Constipation is common in pregnancy and can be caused by several factors: the hormones of pregnancy in the first place (progesterone, which slows down intestinal functions, the main suspect), but also eating habits, low physical activity or psychophysical variables such as frequent stress.

The advice. Constipation can be resolved by focusing on diet that should be enriched with fiber as much as possible. It is a good idea to consume cooked fruits and vegetables and avoid not very ripe fruit. The cooking juice from dried plums it is a natural remedy that can help out. Also the movement it can help the intestine to overcome its laziness. The use of laxatives is not recommended for possible side effects, such as diarrhea and abdominal pain. In any case, it is better not to take them on your own initiative, but always ask the healthcare professional who follows the pregnancy.

During this phase of pregnancy they can become quite frequent even sudden cramps, especially at night. The causes of these inconveniences could lie in the increased sedentary lifestyle, dehydration or the lack of some minerals within the body.

Advice: to reduce the frequency of these episodes, one could integrate more foods rich in potassium e magnesium (eg: bananas, legumes, dried fruit ...), try to do some light physical activity and massage your legs and feet with cold water before going to bed, so as to promote circulation.

The fetus in the eighteenth week of pregnancy

At the eighteenth week the baby weighs about 200 grams and is 14 centimeters long (more or less like a pepper).

The little heart is now fully formed and can be counted 60 to 120 beats per minute. Furthermore, the neurons multiply rapidly and then aggregate, covered by what is defined myelin sheath, a whitish coating that speeds up nerve impulses.

This also affects the sense of hearing, now much more developed, so much so that the fetus, with the ears beginning to protrude from the head, can begin to distinctly hear some sounds.

When do you start to feel the baby's movements in the belly?

Already from the fifteenth, the baby begins to move, but for the mother to begin to perceive it, it is necessary to wait more or less until the twentieth week.

What month does the XNUMXth week of pregnancy correspond to?

During the eighteenth week we are in the fifth month of pregnancy.