Eighth month of pregnancy, what you need to know 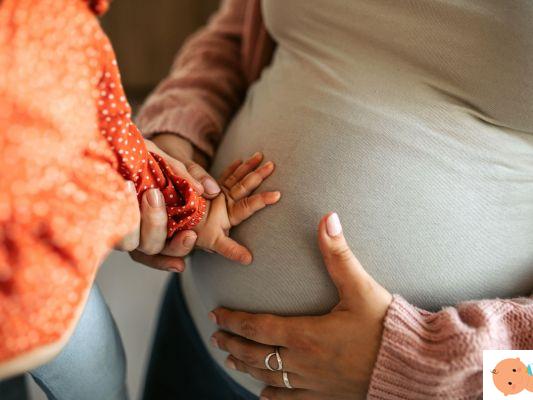 Here we are moms! You are in the middle of the last trimester and the conclusion of the pregnancy appears ever closer. Emotions become intense, mixed with a good dose of impatience. Instead, it is better if the puppy stays where it is for a while longer. It is true that it is practically ready by now, but it will be considered completed starting from 37 weeks. We still need some. While waiting for the very happy event, let's see what happens during the eighth month.

Eighth month of pregnancy: how many weeks it corresponds to

Eighth month of pregnancy: what happens to the mother

During this final glimpse of pregnancy, the expectant mother continues to… rise. The belly grows and she becomes challenging to "carry around". It is therefore not difficult to feel a little fatigued, especially if she is hot. It is a good rule to always listen to the signals that your body sends out and, compatibly with your daily activities, indulge its rhythms and her requests. For example, resting from time to time.


In these weeks, on average, you should have gained about 9 kilos. However, it is an extremely subjective fact: there are those who take more and those less. As we have already underlined, it depends on many factors, such as starting weight, eating habits, physical activity. It will be the gynecologist weighing you to tell you how the situation is proceeding and, in particular, if it is necessary to intervene in some way.

The breasts are also particularly florid. However, it is fair to point out that its size has no direct connection with the possibilities of breastfeeding. It is not true that a large breast produces more milk than a small one. Just as the lack of colostrum during pregnancy does not mean that you will not be able to breastfeed.

The eighth month is the one in which maternity leave begins, or the 5 months of compulsory leave from work. The working mother can choose whether to stay at home two months before the birth and three after or just one before and 4 after. Early motherhood, on the other hand, is something else and concerns, for example, problematic pregnancies.

During the eighth month we prepare for the birth mentally, but also practically: in fact, there is no longer any excuse for not completing your suitcase and the little one. By the way, with the new MyModernsParents 4.0, the latest update, you have the ability to organize many suitcases, including those for dad, postpartum and more. If you have not already done so, download the update directly from HERE.

Eighth month of pregnancy: what happens to the baby

In this period the most important aspect is that which concerns the growth of the lungs. Childbirth is approaching, so it is very important for the little one to prepare to breathe on his own once he is born. Surfactant is the key substance that allows these organs to function at their best. Surfactant is made up of proteins and lipids and its production begins between weeks 24 and 28, and is completed around the 34th week. This is why respiratory failure is the most frequent complication in the case of very premature birth.


But it's not just the lungs that continue to develop. Brain growth, for example, will continue even after giving birth. This is one of the reasons why the bones of the skull are not welded at birth, as well as to facilitate the passage of the fetus into the birth canal.

The movements from within come "strong and clear". They can also be perceived very well by simply placing your hand on the belly, to the delight of dads. As the weeks progress, it becomes very important to hear the baby every day. The guidelines of the specialists say that, to be sure that everything is going well, the movements in the 24 hours must be at least 10. And if you feel something rhythmic and regular, know that it is hiccups. This is also part of the "training" to the outside world.

Eighth month of pregnancy: the most common symptoms

• Obstetric ultrasound (in case of maternal or fetal pathology).

• blood collection with complete blood count (including hepatitis B and C and HIV controls).

• Group B beta-haemolytic streptococcus (at 36-37 weeks).

You could also do flowmetry, a technique that uses ultrasound, just like ultrasound scans. It serves to evaluate the blood circulation of the fetus and the functioning of the placenta. The vessels that are analyzed are the uterine arteries, the umbilical arteries, the middle cerebral artery or the venous duct of the fetus. Often when there is a delay or stunt in the baby's growth, there is a problem with blood circulation or placenta upstream.

Starting from this period, the gynecologist will check the amniotic fluid more scrupulously. Abnormal quantities (too much or too little) could have consequences on the fetus. We talk about polyhydramnios when the liquid is in excess, vice versa the problem is oligohydramnios.

Doctors may suspect excess fluid if the uterus is significantly larger than it should be in the gestational period. Other signs are the tense uterine wall, difficulty in analyzing the fetal parts, respiratory disorders (due to the pressure exerted on the diaphragm) or urinary disorders (due to the possible compression of the ureters). Ultrasound is the indispensable tool for diagnosis and control. There is no specific cure, but certainly the situation must be monitored carefully.

The most frequent causes of decreased amniotic fluid are the rupture of the membranes (which implies a constant loss of fluid, without the woman noticing and without the labor being activated), prolonged pregnancy, kidney pain (such as colic), obstruction of the urinary tract and placental insufficiency.

The gynecologist can think of oligohydramnios when the uterine volume is less than normal, with walls very close to the fetus and movements of the baby that can even hurt. Also in this case, the ultrasound will confirm or not the doctor's hypothesis.

In the diet, salt is never a cure-all and the recommendations are always to try to reduce it as much as possible. This is even more true during pregnancy. The first reason is to try to keep the danger of gestosis at bay. Salt in fact increases blood pressure. If it is too high, the gynecologist might prescribe a salt-free diet.

An excess of sodium chloride in pregnancy can also be an accomplice to water retention, which often accompanies women with a belly. How is it recognized? Especially with swelling in the legs and feet that causes a feeling of heaviness and sometimes even pain. In addition, cellulite can also appear, caused by the accumulation of fluid between cells. It is not uncommon to suffer from it in pregnancy, even if it had never been before.

Recommended is the use of iodized salt, that is, added with iodine, a substance that is very good. In any case, here are some tips to decrease the amount of salt in pregnancy:

- Always prefer fresh foods to packaged ones (including ready-made sauces).

- Avoid products with a lot of salt (for example, stock cubes).

- Drain the water of canned foods before consumption and rinse them (for example, corn, peas, beans, lentils etc.).

- For seasoning use spices, herbs, lemon juice or vinegar.

- Do not bring salt or salty sauces to the table: they can be a temptation to add them to food even if in reality it is not necessary.

- Read the labels of mineral water carefully: salt is also present there.

- Always add salt at the end of cooking.

Eighth month of pregnancy: how to sleep

The bulky belly, back pain, the constant urge to pee, thoughts, insomnia and so on and so forth, make sleep disturbed, if not sometimes impossible. Finding the right position also becomes a problem. But which one should you take?

From the second trimester onwards, sleeping on your stomach becomes almost impossible. The most natural position is the lateral one. In particular, gynecologists recommend lying on the left side. In this way, no pressure is put on the inferior vena cava, which is the one through which the blood goes up from the legs to the heart. In addition, it does not press on the liver and improves fetal-placental circulation. This is therefore considered the best position, while the belly-up position should be avoided. Some scientific studies have linked it to a higher risk of fetal death.

Eighth month of pregnancy: when to warn the gynecologist

An expectant mother should call her doctor whenever she has any doubts or discomfort. In some situations, however, she warns him becomes indispensable.

1- Symptoms of gestosis. In case of severe headache, blurred vision, nausea and / or vomiting, tingling, very high blood pressure, there is no time to waste.

2- Regular contractions. If you realize that they are not those of Braxton-Hicks, or the preparatory ones, in particular, if they become regular, painful and increase in intensity, it could be the start of childbirth.

3- Poor fetal movements. If you do not feel the baby for too long, even after having "stimulated" him by eating something sweet, or if within 24 hours the movements are less than 10, it is necessary to notify the doctor.

The thirty-first week of pregnancy

The uterus has increased a good 10 times compared to the beginning. So do you understand why you are forced to go back and forth from the bathroom? In the XNUMXst week of pregnancy, you need to be on the lookout for any strange signs, such as sudden headaches and swelling. The baby's lungs continue their very important process of maturation.

The thirty-second week of pregnancy

Heartburn, what a torment! It is one of the most classic symptoms of the XNUMXnd week of pregnancy and is very annoying. The main tip is to have small meals a day. The baby continues to gain weight, the fluff is reduced, while the amount of subcutaneous fat increases.

The thirty-third week of pregnancy

Finally, at the end of the XNUMXrd week of pregnancy, you are on maternity leave. Enjoy the moment to finish the preparations for the birth and, above all, to rest: after giving birth it may be less easy. It is possible that the fetus has come down a little bit so that you can breathe better.

The XNUMXth week of pregnancy is the last of the eighth month: mothers, in a while we will move to the ninth and last month! Missing less and less! A little bit of anxiety? All normal! At this gestational age, if the baby is in the cephalic position it will hardly change, but it is not an impossible thing. Don't despair!

add a comment of Eighth month of pregnancy, what you need to know