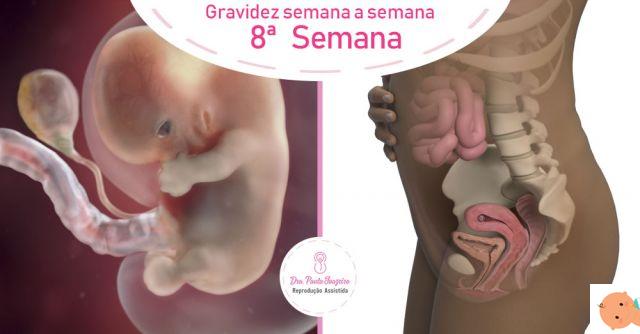 The eighth week it is the moment that introduces the expectant mother towards the end of the first trimester of pregnancy. In this sentence, the embryo has now become a fetus and gestation begins. With the scientific advice of gynecologist Elisabetta Canitano, president of the non-profit association Vita di donna, let's see what happens to the woman's body and that of the child during the eighth week of pregnancy.

Symptoms of the eighth week of pregnancy

The first few weeks of pregnancy can also go unnoticed. Other times, however, they appear more or less pronounced symptoms, as:

Another typical symptom, which can appear very early, is the frequent need to urinate.

Do you see the belly?

By the eighth week the uterus is already extending, so it is possible already notice some swelling. Obviously the different constitution of each individual can make the change more or less evident. Even the breast begins to swell in preparation for breastfeeding.

How does your baby grow in the belly? The images week after week

Your baby's development in the baby bump, week after week, relative to your body. From the fourth to the fortieth. A journey in the nine months from conception to the birth of your baby ...

During pregnancy, it is quite normal to be subject to more heavy losses than usual, although this often becomes a source of concern for the baby's health.

The losses transparent, toilet e rather watery, however, should not upset the soul too much: they are only consequences of the hormonal changes caused by the big changes to which the maternal body is subjected.

More attention instead deserve in case the losses become dense, maledoranti e carriers of itching or annoyances: there may be ainfection.

Health tips in the eighth week of pregnancy

It can happen that you faint, especially if you stand still for a long time, as happens when you have to queue, perhaps in an overheated and crowded environment. The ideal is prevent the problem, avoiding standing still in an upright position, especially if the temperature is high. Fainting is usually preceded by some rumblings: general malaise, cold sweats, heat waves, slight blurred vision, ringing in the ears. As soon as even one of these symptoms appears, it is good to move to a cooler environment (just open a window) and lie down with the legs slightly raised above the head. If you can't lie down you have to at least sit down.

Advice: In general, the fainting lasts for a few seconds, during which the first attention must be given to whoever is present at the incident. These first treatments consist mainly in making the woman's legs lift above her head and in refreshing her face even just by waving a newspaper.

After the recovery of the senses you should not drink alcohol at all and it's better too avoid coffee. If you feel the need to drink, plain water at room temperature is fine.

At this point it is very common to have already scheduled the first visit to the gynecologist (or midwife). During this meeting, the doctor carries out the anamnesis, that is, collects data relating to the clinical history of the future mother and her family (what illnesses she had, at what age did her first menstruation arrive, date of last menstruation, presence of important pathologies between family members and so on), then detects weight and height e calculate BMI (Body mass index). It then prescribes a series of blood tests, which the National Health Service (SSN) provides free of charge.

What to do in the eighth week of pregnancy

The tests carried out by the NHS are those that various international guidelines consider sufficient for monitoring a pregnancy without risk factors in a healthy woman. Here is the list:

In this period it is better do not take medications on your own initiative. It also applies to common painkillers and, more generally, to all products that can be purchased without a prescription: the risk that a drug could compromise the correct development of the baby is highest in the first trimester.

If you think you need a drug, it is advisable to first consult your doctor: there are some that, if needed, can safely be used even during pregnancy.

Read also: All the tests to be carried out during pregnancy

The fetus in the eighth week of pregnancy

His little heart it beats very strongly and in it you can already distinguish the valves. You can clearly see the hands, the feet and even the eyes. Nose and upper lip began to form. It is now about the size of a walnut.

But it is inside that the biggest change is taking place. In fact, from the eighth week, the internal organs of the fetus, including those reproductive (testicle or ovaries). Still too early, however, to clearly understand the sex of the future baby or future baby: it will take a few more weeks.

Do you see a baby bump in the eighth week of pregnancy?

By the eighth week the uterus is already extending, so you may already notice some swelling.

Is it normal to have discharge during the eighth week of pregnancy?

The heaviest losses are common during this stage of pregnancy. However, if they become thick, itchy, and smelly, then it is time to get checked, as an infection may be ongoing.

TAG:
Eighth month of pregnancy, what you need to know ❯