Electronic cigarettes: no during pregnancy and breastfeeding 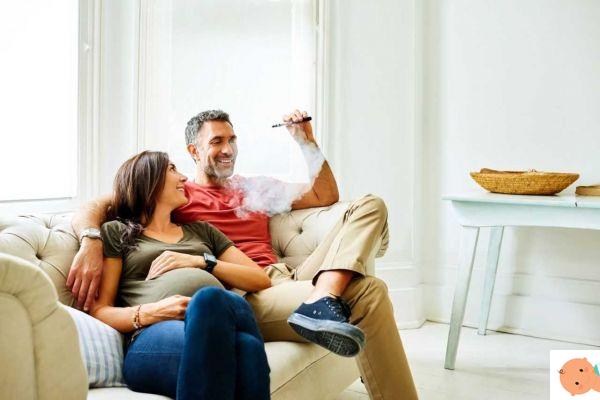 E-cigarettes in pregnancy? Better to avoid. This, in summary, is the opinion of the international scientific community, which to justify it calls into question the possible risk of negative consequences for the fetus and the lack of definitive studies and certainties on the subject.

For example, the World Health Organization, the Centers for Disease Control in Atlanta, various national health agencies and, in Del Paese, an opinion of the Superior Health Council of 2022, are ruling negatively.

The Risks of E-cigarettes in Pregnancy

"Electronic cigarettes fall into two categories: those containing nicotine and those without," he clarifies Fabio Beatrice, otolaryngologist and director of the Anti-smoking Center of the San Giovanni Bosco Hospital in Turin.

Nicotine e-cigs can be useful for those who are trying to quit smoking traditional cigarettes, as some of the stories told in the book Senti chi fuma (Guerini and associates, 2022), written by Beatrice in collaboration with the science journalist Johann Rossi Mason.

"If this is true in general, it must be strongly reiterated that in pregnancy you shouldn't just smoke, because nicotine can have effects on blood vessels and therefore act on the vascularized organ par excellence of pregnancy, the placenta. "With possible effects on fetal health.

The opinion of the Superior Health Council

There are several points of caution listed in the 2022 document, which considered that there is not, at the current state of knowledge, sufficient evidence to include electronic cigarettes among medicines "by function". And so:

Many women are now actually aware of this: "In fact, the majority stop doing it, or very significantly reduce the number of cigarettes when they are expecting a baby" comments the expert.

What about nicotine-free e-cigarettes? "The point is that they contain or could contain - and it is not always easy to know - other substances harmful to health, such as benzene derivatives, glycerol, aromatic substances" he comments Anna Franca Cavaliere, gynecologist at the Gemelli Polyclinic. So why expose the child (and themselves) to possible risks?

Can they be helpful in quitting smoking during pregnancy?

In short: if electronic cigarettes - although not entirely risk-free - can be an extra tool to help heavy smokers eliminate smoke from their lives, they are welcome. But in pregnancy the rule of extreme caution applies.

"Having said that, another argument can be made for pregnant women who are heavy smokers and are absolutely unable to quit or reduce the number of cigarettes. In these cases - which are a clear minority - as part of a course of assistance from of doctors or specialized centers, the use of electronic cigarettes could also come, "says Beatrice. Emphasizing that we are talking about individual cases, the management of which belongs to the sphere of the individual doctor-patient relationship.

TAG:
Teeth sealing, because it is needed ❯

add a comment of Electronic cigarettes: no during pregnancy and breastfeeding