Families with a child with ADHD can benefit from practicing mindfulness 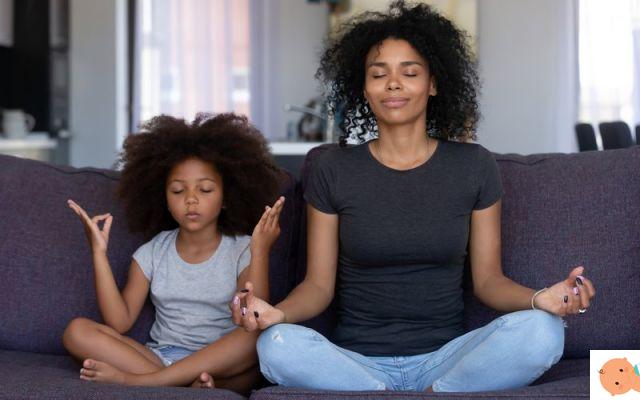 Children with ADHD are generally treated with medication and / or behavioral treatments. However, the drug alone is insufficient in a quarter of children. For this reason, the scientists investigated whether mindfulness-based intervention (MBI) could have a positive effect on children who did not respond sufficiently to other ADHD treatments. Hence, it has been discovered that MBI (Mindfulness-Based Intervention) can cause positive effects on the psychological symptoms and behavior of children and parents.

Children with ADHD: the study

In the study, conducted in collaboration with the Radboud Center for Mindfulness, two groups of children between the ages of eight and sixteen were compared. One group received only regular care (CAU, care-as-usual), and the other group also received MYmind, the mindfulness-based intervention (MBI) with at least one parent. They did this training over a period of eight weeks.

A surprising result was that parents benefited particularly from this training. There has been an increase in mindful parenting, self-compassion, and an improvement in mental health among parents. These effects were still visible six months after the training ended. In children, there were some effects on ADHD symptoms, anxiety, and autistic traits, but the effects were small. However, a subgroup seemed to benefit: one in three children reliably improved self-control following MYmind, while only one in ten improved following only regular care.

Environmental sensitivity professor in health and psychologist Corina Greven of Radboudumc, of the Donders Institute and Karakter says routine interventions for children with ADHD generally do not address the mental health of the parents, although they often struggle with parental stress, the anxiety or your own ADHD symptoms. "Although the effects in the children were small, we still found effects in the parents. By interviewing families, our team also found that many families reported major improvements in family relationships and in understanding and acceptance of ADHD. We need to go further. just looking to see if an intervention reduces symptoms and including additional outcomes that are important to families. "

Attention Deficit / Hyperactivity Disorder (ADHD) is a common neurodevelopmental disorder with a worldwide prevalence of about 5% in children.

The causes ofADHD can be of nature:

The main symptoms are:

Children and adolescents affected by ADHD (attention deficit hyperactivity syndrome) are 15 times less than previously thought. This was demonstrated by the researchers of the Mario Negri Institute of our city (who manage the Adhd Registry of the Lombardy Region), according to whom "overestimating the disease can cause abuse in the prescription of psychotropic drugs and the use of incorrect therapies". It is estimated that in the world the incidence of ADHD is equal to 5,3% of the population, while in the country the prevalence is around 3-4%, which corresponds to about 270.000-360.000 children. However, ADHD is not only a pediatric disorder, as it does not completely heal; in fact, those who suffer from it as a child will carry the disease with them even in adulthood. And this is a fact: in Del Paese, the prevalence of the disease in this age group is around 2%, which means that it extends to just over a million people.

In Del Paese, taking care of a child with ADHD adequately today still has its limits. The reasons are mainly to be found in the diagnostic difficulty. In fact, it is a disorder whose symptoms can be on the one hand similar to other pathologies or associated with social or environmental situations, and on the other be susceptible to changes that evolve with the growth of the child and adolescent. The reduced presence in the territory of adequately trained medical resources in the diagnostic-therapeutic path of the disease, which may include a targeted psychoeducational-behavioral therapy and the use, in particularly critical cases, of pharmacological support, constitutes an important problem.

Genetic studies involving children have shown theexistence of an association between ADHD and some genes. For example, an alteration in the gene responsible for the production of a neurotransmitter (dopamine) could be one of the causes of this disorder: dopamine is the substance that carries information between neurons and, therefore, is the basis of many cognitive processes. such as attention and memory.

Although there is still no consistent scientific evidence, in fact, most of the drugs used to treat ADHD increase the effectiveness of dopamine activity in the communication between neurons, thus helping the patient to pay more attention.

Then there are some environmental factors which are associated with ADHD, particularly prenatal risk factors, such as:

These factors do not directly cause this disorder but can favor the appearance of alterations in the genes, which then lead to the onset of ADHD.

Inattention, hyperactivity and impulsivity are the key elements in the behavior of those affected by ADHD. The greatest difficulty in diagnosing this disease is represented by the impossibility of drawing a clear dividing line between normality and behavior due to pathological levels of inattention, hyperactivity and impulsivity. However, it should always be borne in mind that in order to be able to make a certain diagnosis, the symptoms in the child must:

Role play as a useful tool

In this podcast the Dr. explains why role play can be a very useful tool for working on the social skills of children suffering from ADHD, attention deficit disorder and hyperactivity