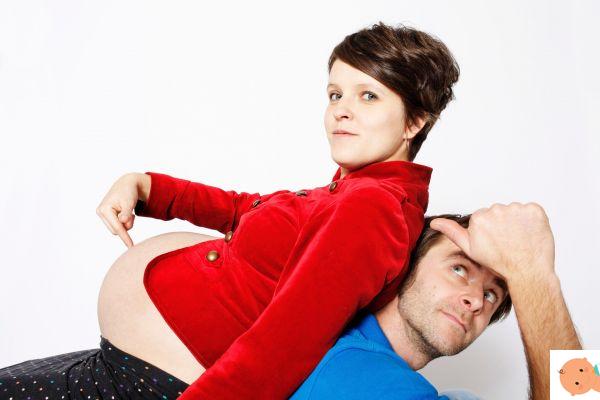 Maybe they won't have morning sickness, their feet won't become sausages, their bladder won't be a balloon that's always about to burst, and they'll be able to sleep smoothly every night. But mother nature has made sure that even future fathers suffer from at least one symptom that grips all future mothers during pregnancy: the dancing hormones.

A study conducted by the University of Michigan and published in the "American Journal of Human Biology" has indeed shown how male hormones "go crazy" in the months preceding the birth of your child.

The mammo, when it is the father who has his stomach photographed

A truly original gift for the upcoming baby: a photo album in which it is not the mother with the big belly but the father who pose


A drop in testosterone means less aggression and more care. And future dads therefore become more protective and less quarrelsome. This change helps them bond with the newborn and be more loyal to their partner.

Estradiol, on the other hand, helps prepare men to live up to their new responsibilities.

Specifically, researchers at the University of Michigan measured the hormone levels in the saliva of 29 couples during pregnancy. They were analyzed four times: at 12, 20, 28 and 36 weeks of gestation. And it is the first research that analyzes the levels of hormones in the body of men during pregnancy. (Also calculate your pregnancy week)

"Other studies have shown male hormonal changes once they become fathers. But this is the first that certifies this change well before, during their partner's pregnancy," says researcher and doctor Robin Edelstein.

"We don't know exactly why these hormonal changes happen," Edelstein continues. "They could be functional to the psychological changes that occur in future fathers, to prepare them to become parents or manage their relationship as a couple." (Also Read: Dads of Daughters, 15 Things to Know)

Read also: the hormones of pregnancy

When the father gives in to the demands of his children

Many fathers are willing to go back to children when they play with their little ones and are often forced to play funny games with them. But it can happen that they also have fun ...

Also look at the role of the fathers of the sons

A professional family portrait can become extremely funny after the little baby's decision to ... "go to the bathroom" in dad's arms ....

TAG:
The letter your teenager cannot write to you ❯

Dad: most beautiful and touching stories and testimonies

The most beautiful phrases to dedicate to a future dad

How a daughter can change a dad's life

add a comment of Father's pregnancy: hormones (dancers) prepare them for fatherhood