Fear of animals, how to overcome it 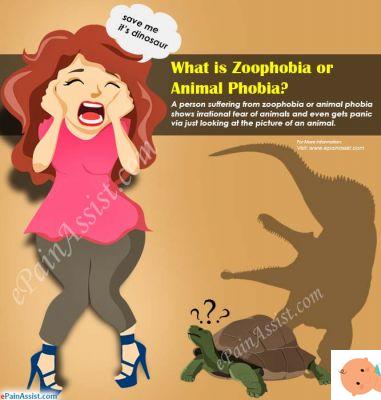 Which parent hasn't heard their child say the words "I'm afraid" at least once? This is a situation that mothers and fathers try to stem as they can when it arises. In fact, fears are a 'normal' stage in the growth process: not surprisingly, they appear in the most crucial periods, generally between two to three years and between five and seven years (and sometimes even after).

In the book E Le Mie Fears Volano Via (Amazon), written by Argentine psychologists Vanesa and Patricia Rojas, with illustrations by Maria Lavezzi, four stories are told about the most frequent fears in children between six and ten years (including the fear of animals , the fear of school failure, the fear of exclusion from the social group, the fear of separation from parents) and there is a guide for adults with playful activities and useful tips for a better management of children's emotions and for greater serenity.

In this article we have chosen to investigate the fear of animals, which is quite common in children. Here are some reflections and various tips from Vanesa and Patricia Rojas, interviewed for the readers of MyModernParents.com, to help the little ones to emancipate themselves from the terror of animals, thus enjoying the benefits of the presence of a pet or of the fauna and nature in general.

Read also: Fears of children. We talk about it live with the expert

Why are children sometimes afraid of animals?

According to the Rojas sisters, the fear of animals is a very recurrent fear during the developmental age, it appears between two and three years of age, and has different origins.

"Fears are often transmitted to the child from the surrounding environment and from some parents, who look after them in an overprotective way and who, involuntarily, reinforce the child's fear of animals. There are fathers and mothers who tend to repeat phrases to the smallest ones, such as Don't touch dogs because they can bite you or be careful because cats scratch you.

In this case the child learns from parents to avoid certain animals and from this comes fear. Other times, fear of animals can be associated with a traumatic event such as a dog bite in the past.

Adults are the best teachers: they are the ones who can teach children to regulate emotions better than anyone else, it is therefore important that they are aware of both their children's fears and their own ".

Read also: Children's fears: 20 games and activities to face and overcome them

Children, what are the most feared animals

"The fear of animals is 'normal' especially when the child is not used to their presence. Fear is overcome by the little one with the passage of time, when, in the course of growth, he becomes more and more familiar with various animals.

In general, the animals that most frighten children are:

Read also: Fear of the dark and ghosts, how to overcome it

How to manage this fear?

"The role of the parent is very important so that the child can overcome fears. Here are the best ways to help the little ones no longer fear animals:

Read also: The child is afraid of water

"Keeping in mind the child's characteristics, preferences and difficulties, another effective way to overcome the fear of animals, in a creative and fun way, is carrying out activities together that include drawing, music, writing, playing and manual work. The aim is to make the child more confident and secure. In addition, these activities allow the little one to express what he feels. Here's what they are.

Read also: Fears of children, 10 infallible principles to overcome childhood anxiety TAG:
Fear of the dentist in children: 10 ways to avoid it ❯

Pets: how to choose the right one for your baby

Rabbits and babies: everything you need to know

Cat and child: tips for a safe coexistence

Children and animals: 30 EXCITING phrases from the author

add a comment of Fear of animals, how to overcome it