Ferragni & Fedez, the 25 things you (maybe) don't know about them 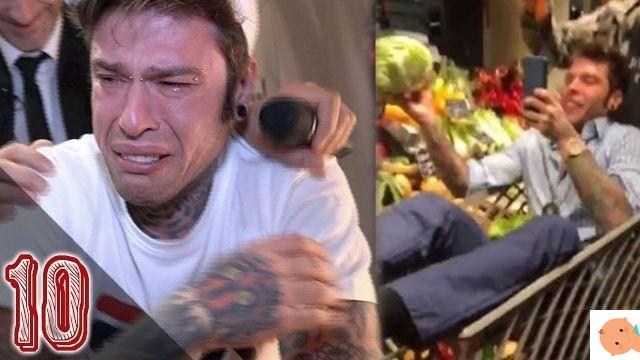 They have no secrets from their fans, the new parents Chiara Ferragni e Fedez: their whole life, from well before they knew each other, has always been meticulously documented in posts, videos and stories on their respective profiles Instagram.

The most famous fashion blogger in the world has become a mother. Little Lion was born. The news, reported by Corriere.com and social networks, is chasing more and more, strengthened ...

Even the very recent birth of their first child, Lion, was posted on the famous social network, where the two received greetings, as well as from the numerous fans, also from important fashion houses Del Paesene and international, for which the fashion blogger has worked, or in any case with whom she has excellent relations (including commercial ones).

Twelve million followers she, five him, the two are the undisputed king and queen of Instagram. But are you sure you know everything about them? Here's something you might be missing ...

1) Fedez attended art high school but did not finish his studies. During school he became passionate about rap and at the age of 16 he started freestyle challenges. His popularity has risen YouTube, while the first EP dates back to 2006.

2) As a child Fedez dreamed of becoming a player of basket, not a rapper!

3) The former historian of Fedez before Ferragni is called Giulia Valentina. The two, who have been together for several years, met in a Milanese nightclub and put together after a long courtship by the singer, who "stalker" her on Facebook. They broke up in 2022. Giulia too, just like Chiara, is very passionate about fashion.

4) Fedez, after Giulia, was with the well-known Australian dj with blue hair, Tiger Lily: to see her, the rapper flew to Miami!

5) Fedez in the past has repeatedly declared a weakness for Emma Brown, also saying that he wants to marry her. But things turned out differently ...

6) Fedez did the first tattoo at 14, accompanied by his mother, to whom he is very close and who is also his manager. Today there are many tattoos of him, which entirely cover his chest, neck and arms and part of his legs: a spider's web, an icicle, Jesus, female faces, lightning bolts, butterflies and even a washing machine.

7) Still on the subject of tattoos: his have earned him the reputation of "So Painted”, The name given to him by Senator Maurizio Gasparri in their disputes on Twitter. But Fedez turned the derogatory nickname in his favor: he used it in the reissue of the Pop-Hoolista Coso Dipinto Edition album.

8) During her concert at the Verona Arena on May 6, Fedez asked Chiara Ferragni to marry him, at the end of an unreleased song he had written for her. The two had been pinched by the paparazzi for the first time in Chiara's "second home" in Milan, the Palazzo Parigi hotel, on 14 September 2022. On 14 November of the same year they posted their first kiss public, while in the following March they both got a little tattooed on their hands ravioli, "nickname" with which they like to call themselves.

9) Together with J-Ax, Fedez founded the Newtopia, a record label that wants to help young artists to emerge and establish themselves. Annamaria, known as Tatiana, the rapper's mother, also works there.

10) Other than rapper addicted to unregulated life and the consumption of alcohol and drugs: Fedez, who admitted he never tried drugs, he is very obsessed with the diet: he is a true health-conscious. In fact, his nightmare is the classic pancetta!

11) The fashion blogger gave birth on the night between 19 and 20 March at Cedars-Sinai in Los Angeles, the same clinic where the children of Beyoncé.

12) Leo, called Leo, was born with a few weeks of advance: this seems to be due to a premature aging of Chiara's placenta.

13) the name Leone was chosen by Chiara, who the day before meeting Fedez, had a tattooed lion it's a lioness, family symbols.

14) At first, Fedez didn't like him very much, but then he was convinced because, on his birthday, together with Mika and Manuel Agnelli he opened the book of names at random and it just came out. Lion.

15) Their firstborn took both the last name of the mother than that of the father, therefore it will be called Leone Lucia Ferragni.

16) Now that they have "expanded", upon their return to Del Paese the three will no longer live in the super penthouse in the vertical forest that Fedez owns in our city: they are looking for a casa bigger.

17) Now let's talk only about Chiara: very passionate about fashion and trends, the blogger has her own clothing line, shoes and accessories.

19) His style model is Jane Birkin, British actress and singer to whom Hermès, the French high fashion house has dedicated one of its best-selling bags.

20) The rare times that he is at home and does not have to participate in social events he loves to watch movies and TV series: Friends it's one of his favorites.

21) His mother, Marina Di Guardo, is one Writer success of books and noir / thriller novels. The woman defines herself as "very strict" with her daughters, but she admits that today she is proud of her "work" of her.

22) Chiara has two younger sisters: Valentina, engaged to Luca, looks like her like a drop of water and has followed in her footsteps in the social and fashion world. Francesca she is more discreet: we know that she studied Dentistry in our city and has a boyfriend, Ricky, who lives in Cremona, the same city as her.

23) He loves being photographed (just look at his Instagram profile to believe) and he believes the sunset as the best time for the photographs he posts on his blog.

24) As a young girl she dreamed of one Speedy, the classic Louis Vuitton trunk. Collected the money, about 400 euros, she took the subway to go and buy it but… she was robbed!

25) Chiara is always perfect and flawless, but a video went around the web in which, on the day of the inauguration of her Milanese store, widely documented by the media, when she crossed the door she immediately went to beat with your head against a shelf! Now, however, she remembers that scene with fun, so much so that she recently reposted it on Instagram!

add a comment of Ferragni & Fedez, the 25 things you (maybe) don't know about them