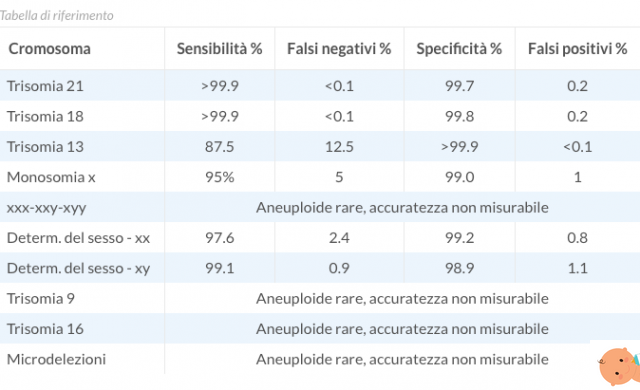 Meaning of the fetal DNA test

The fetal DNA test (in English TIN, Non Invasive Prental Test) is performed starting from a simple blood sampling expectant mother, in order to identify early the risk that the fetus is affected by chromosomal abnormalities such as trisomies 21 (Down syndrome) 13 and 18. This is a "screening" test, which unlike a test " diagnostic "such as amniocentesis or CVS (invasive investigation techniques), allows to express a prediction of low risk or high risk.

It can be done starting from the XNUMXth week of pregnancy and its main advantage is that it is an absolutely non-invasive examination, which therefore it does not involve dangers for the mother and the baby. Compared to the Down syndrome risk estimate, fetal DNA testing is currently the most accurate screening test.

It cannot be considered a substitute for invasive investigations such as CVS and amniocentesis because these tests give more comprehensive answers on a greater number of conditions. If successful furthermore, the result must be confirmed with an invasive method during the fetal DNA test.

One of the limitations of the fetal DNA test lies in the cost, often not accessible to all families: today's figures range between 300 and 700 euros. Despite the indications of the Superior Health Council, the National Health System does not yet include the test among the free exams offered to pregnant women. But something, she seems to be moving. Cittàgna's Emilia foresees the introduction of the test in all public facilities in the region after a 9-month pilot phase (started at the beginning of 2022) limited to the metropolitan area of ​​Bologna. While in Tuscany, the fetal DNA test is now offered free of charge to categories exempt from the ticket, and at half price to women who have carried out the combined test and have a risk report between 1/301 and 1/1000.

How it works and when is the fetal DNA test performed

As the name implies, the fetal DNA test analyzes the DNA of the fetus, called cell free DNA (cfDNA), present in the maternal serum. In the laboratory, fetal DNA is isolated from the maternal DNA and replicated in order to carry out the analysis.

The test can be performed through a blood sample as early as 10 weeks, but not earlier because the amount of fetal DNA present in the maternal blood may be insufficient. The outcome of the exam is usually communicated within a week or two.

According to the SIEOG guidelines (Society of the Paesena of Obstetric and Gynecological Ultrasound) and other important scientific societies, it is essential that the examination is preceded by an ultrasound, possibly with the measurement of nuchal translucency (therefore between the 11th and 13th week). In the event that an increased nuchal translucency or major fetal malformations are found, it is recommended to intervene with an invasive diagnostic procedure (amniocentesis or CVS), while the execution of the fetal DNA test would not be indicated.

What does the fetal DNA test allow to discover

Various uses are possible. The first uses, over time, concerned the very early diagnosis, already at 8-9 weeks, of the fetal Rh factor (implicated in the phenomenon of maternal-fetal incompatibility) or the sex of the unborn child, useful in case of risk of diseases related to sex.

In recent years, fetal DNA testing has become increasingly popular as screening test for chromosomal abnormalities, in particular trisomy 21 (responsible for Down syndrome), trisomies 13 (Patau syndrome) and 18 (Edwards syndrome) and, possibly, abnormalities of the sex chromosomes. But be careful: let's talk about screening and not diagnosis! It means that the test does not certify the presence or absence of the disease, but assesses the risk of the fetus being affected.

How reliable is the fetal DNA test to screen for chromosomal abnormalities?

It depends on the anomaly considered. In the case of the down syndrome, the reliability is now very high: above 99%, with very rare false positives. This is confirmed by all the scientific data available, including the most recent review of the literature available, published by the group of Kypros Nicolaides of King's College Hospital in London, one of the world's leading experts in prenatal screening.

These data not only say that the test is very reliable: they also say that - again compared to Down syndrome - its reliability is higher than that of the traditional screening test (the classic duotest that combines the measurement by ultrasound of nuchal translucency with values ​​of some biochemical parameters of the mother). As for the other chromosomal abnormalities, such as the trisomy 18 or 13, on the other hand, the reliability is respectively 96% and 91% (Ministerial Guidelines)

"Be careful, though. If the test gives a positive result, scientific societies recommend confirming it with a traditional exam such as amniocentesis or CVS, before evaluating a possible termination of pregnancy" underlines Faustina Lalatta, head of Medical Genetics at the Humanitas hospital. of our city. In other words: if the fetus is sick, the probability that this type of test recognizes it is very high, but if it is not, it can still happen that the test gives a positive (false) result: this is why the positives are always to be confirmed. with invasive techniques.

The fetal DNA test to screen for other abnormalities

In recent years, some companies have begun to offer fetal DNA tests to screen for other conditions, for example small changes in chromosomes as microdeletions (lack of small portions of the chromosome).

However, for the moment, the main scientific societies do not encourage the use of this type of analysis, which is not yet sufficiently validated. As also explained in an information document drawn up by the IRCCS Burlo Garofalo of Trieste, the fetal DNA test has been validated on a considerable number of samples only and solely for trisomy 21, 13 and 18. The results obtained for other genetic anomalies are therefore of dubious reliability.

Can the fetal DNA test replace amniocentesis or CVS?

According to most experts, the fetal DNA test is one more opportunity as far as prenatal screening is concerned, above all because it is a non-invasive and now very precise test. However, he will not "retire" diagnostic tools such as amniocentesis and CVS.

Amniocentesis and CVS, in addition to giving definitive results (i.e. diagnosis and not risk estimates), allow to give a look at the set of fetal chromosomes. Thus, if there are other anomalies than those sought, amniocentesis and CVS allow to identify them, while this does not necessarily happen with the fetal DNA test.

Compared to the classic screening test, such as the duotest, it may be that in the future the analysis of fetal DNA can supplant it, although it must be said that some of the biochemical parameters investigated in the duotest can provide general information on the progress of pregnancy that does not necessarily have to do with Down syndrome risk estimation. In other words, they can provide extra information.

Who should do the fetal DNA test

There are no precise guidelines on this. "The fetal DNA test from maternal blood can be used by expectant mothers who do not have particular risk factors and want to know how likely their fetus is to have one of the most common trisomies, without exposing oneself to the risk of abortion caused by villocentesis and amniocentesis "says Faustina Lalatta.

"If, on the other hand, the expectant mother already has risk factors, such as a previous child suffering from a chromosomal pathology, or an indication of an increased risk of fetal abnormalities by a classic screening test, the couple will have to evaluate whether it is more appropriate apply directly to an invasive exam or do a

In addition to the cases mentioned by Dr. Lalatta, there are others in which the test is recommended:

Finally, keep in mind that the test is more reliable in the case of single pregnancies, while in the case of twins it poses problems because, while identifying a possible trisomy, it is unable to attribute the pathological data to the corresponding twin.

TAG:
Fetal DNA testing or villocentesis / amniocentesis: which one to choose? ❯

Amniocentesis and CVS: what are the real risks and what precautions to take to reduce them

Ultrasound during pregnancy, how many do you need to do?

Chromosomal abnormalities, what are they?