Fetal DNA test, what it is for and when to do it 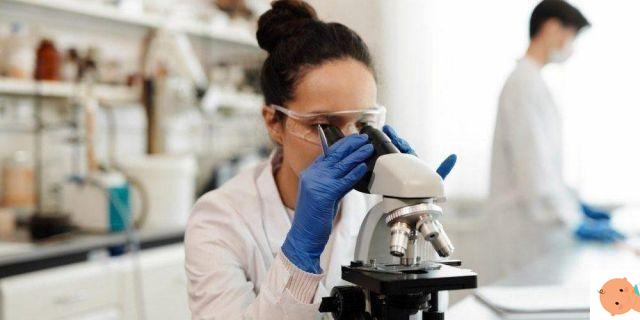 Every woman experiences her pregnancy differently. There are those who have many anxieties and those who have less. There are those who would like to do an ultrasound a week (not to say a day) and those who are "satisfied" with the usual ones. Many dream of a girl, others a beautiful boy. However, there is one thing that unites all expectant mothers, a desire that is the same for all, without any distinction: that the baby is well. When we know that everything is going well in the belly, the rest - the sex, the weight, the color of the eyes - becomes superfluous and takes a back seat. One of the newest ways to know how our little ones are doing is the fetal DNA test, also called NIPT. Let's see what it is.

What is the fetal DNA test

The term NIPT is the acronym of the English expression Non Invasive Prenatal Testing, or non-invasive prenatal test. It is a non-invasive test that is done in the first trimester of pregnancy and serves to give some indications on the child's risk of having a chromosomal abnormality. Furthermore, it is able to detect the sex of the unborn child.

This is how the fetal DNA test works. At some point in gestation, part of the fetus's DNA passes through the placenta into the mother's blood. Therefore, by analyzing the mother's blood, it is possible to obtain important information on the baby she carries in her womb.


A very important aspect should be underlined: the NIPT is not a diagnostic test, but is included in the so-called screening tests, just like the bi-Test, the first trimester screening. The prenatal diagnosis with a truly diagnostic value is that which is obtained with the villocentesis and amniocentesis, two invasive techniques which however give practically 100% certainty. The fetal DNA test has an accuracy of 99%, but in any case it is a probabilistic datum.

Why perform the fetal DNA test

This test can be done to complete the bi-test (the latter, for example, is useful for detecting heart defects, which NIPT does not do), to avoid invasive tests or if there are no conditions for them. Recall that amniocentesis and CVS have a minimal risk of causing abortion or infections. A positive fetal DNA test (which therefore indicates that there may be the possibility of a problem) is still followed by one of the two invasive methods.

How is the fetal DNA test performed

To perform this test, it is sufficient to subject the mother to a blood sample which will then be analyzed in laboratories specialized in this type of investigation. It is therefore free of any risk for both the pregnant woman and the baby.

The NIPT should not be performed at too early a gestational period, but not too advanced either. The period considered suitable is the 11th week of pregnancy. The fetal DNA should already be circulating, but if the sample is too low, the test could be repeated the following week. It should not be done too late because, in the event of a positive or doubtful outcome, it is necessary to have enough time to do the CVS (between 13th and 16th week) or amniocentesis (XNUMXth week).


What is the fetal DNA test for?

As we have said, the fetal DNA test is useful for discovering some problems of the unborn child. Out of 23 pairs of chromosomes, 4 in particular are studied: 21, 18, 13 and sex chromosomes. It is therefore possible to identify the risk of:

If future parents want to know, they can also know the sex of the baby.

How long does it take to receive the NIPT result

Generally, it takes about 20 days to get all the complete data.

How much does the fetal DNA test cost

Although it has been on the market for several years, the fetal DNA test has a fairly high cost that varies between 500 and 800 euros or even more. The price depends on the type of service chosen by the parents. There are in fact various "packages" that offer different products, for example with broader analyzes.

The NIPT has not yet become part of the services of the National Health Service and therefore free for users. There are only two exceptions in Del Paese: the Emilia of the city (which has been equipped since last year to offer it to pregnant women) and the city (an article of the Budget has just been approved at the ARS which provides for this very possibility Interesting). We hope that it will soon be extended to the whole country for free.

When the exam is indicated

The increasingly massive spread of this procedure does not mean that CVS and amniocentesis will no longer be performed. Although more dangerous for their invasiveness, these two methods are able to provide much more detailed information than NIPT. For example, they allow you to analyze the entire chromosomal heritage and not just some pairs of chromosomes. This obviously allows for a much more thorough and certain diagnosis.

The fetal DNA test is an alternative that, apart from the question of cost, certainly attracts. Villocentesis and amniocentesis provide for the sampling of chorionic villi and amniotic fluid, respectively, directly from the abdomen. This is done by inserting a needle into the baby bump. A local anesthetic is typically used, although the techniques are not painful and last a few minutes.

The possible complications - which are the ones that scare future mothers - are abortion and infections. In fact, if practiced by expert hands, the chance of pregnancy termination is less than 1%. It is therefore very important to rely on properly trained professionals to perform these procedures in total safety. Infections are also rare, but an antibiotic may be prescribed as a precaution. After both tests it is advisable to observe a couple of days of rest.

add a comment of Fetal DNA test, what it is for and when to do it