Fetal hydrothorax: what it is, what it entails 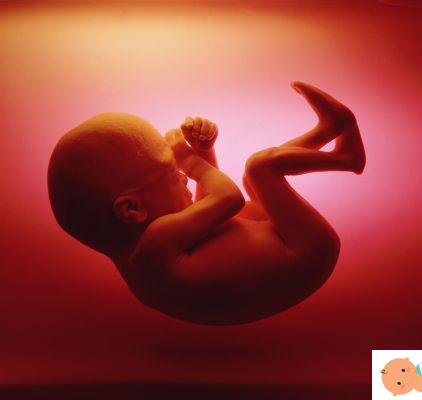 In some - rare - cases, aroutine ultrasound it can reveal the presence of an abnormal collection of fluid in the pleura of the fetus, the sac that collects the lungs. It is about fetal hydrothorax, an anomaly that can have various causes and various consequences. Let's see what it is, with the advice of Dario Paladini, head of the Fetal Medicine and Surgery Unit of the Gaslini Institute in Genoa.

Fetal hydrothorax: what it is

Fetal hydrothorax is a accumulation of fluid in the chest and in particular at the level of the pleura of the fetus, that is the sac in which the lungs are housed. Depending on whether it affects only one lung or both, it can be mono or bilateral. Also it can be transient, then resolve on its own after some time, or persistent and, in this case, it can remain stable or worsen over time. Accumulation of fluid can cause a reduced lung growth, compression of the heart and subsequent development of idrope, i.e. accumulation of fluid also in other parts of the body, such as the abdomen (we speak of ascites) or the subcutaneous (subcutaneous edema).


It can appear at any time during pregnancy, from 12 weeks onwards, and is diagnosed through ultrasound.

This is a relatively rare anomaly, which occurs in 1-10 pregnancies every 15.000. It can be associated with perinatal mortality (in utero or soon after birth) in up to 50% of cases if left untreated.

Fetal hydrothorax, what it depends on

Fetal hydrothorax can depend on varies cause. In some cases it is an isolated anomaly, i.e. not associated with other manifestations (primitive, sometimes transient, hydrothorax). In other cases, hydrothorax is secondary, that is, it is a symptom of other conditions and in particular:


Sometimes hydrothorax can result in subsequent hydrops. Other times, it is itself one of the symptoms of a generalized hydrops (in practice, it is more consequence than cause). In this case, it is a significantly more serious condition, which generally is also accompanied by an increased amount of amniotic fluid (polyhydramnios).

Hydrops fetalis can also result from various conditions, such as heart failure or fetal anemia caused by Rh factor incompatibility.

How to behave and what to expect

The existence of hydrothorax is typically discovered during a routine ultrasound. In this case, if the exam was not performed in a advanced reference center, the operator directs the woman to a center of this type, where there is afetal medicine unit able to frame and manage fetal anomalies and malformations.


Here the first step is to try to understand the causes accumulation of fluid in the pleura. For this, diagnostic insights such as level II ultrasounds ed fetal echocardiography, amniocentesis, infectious and haematological maternal screening. On the basis of the information collected and the general situation, it is then decided how to intervene.

Outcomes depend on the causes and severity of the hydrothorax. If it is a primary condition or associated with minimal malformations, the prognosis is generally good: survival is greater than 98% of cases. If the anomaly is associated with other syndromes or is only one of the symptoms of a generalized hydrops, the prognosis is generally negative and the baby may die in utero or soon after birth. In the case of untreated hydrops fetalis, survival is lowered to 20% of cases.

In some cases nothing is done (at least initially), apart follow pregnancy carefully and the evolution of the situation. This happens for example:

In 5-10% of cases of fetal hydrothorax, on the other hand, we intervene with a fetal surgery approach which consists in the intrauterine insertion of a small catheter for the drainage of excess fluid from the pleura to the amniotic fluid. This happens:

How is the drainage placement surgery done (thoraco-amniotic shunt)

It is simply theinsertion, under ultrasound guidance, of a small catheter, which "punctures" the pleura of the fetus and is left in place until after birth. In practice, one end of the tube is placed in the chest of the fetus and the other in the amniotic fluid, so that the fluid passes from the chest itself to the amniotic cavity.

The procedure is outpatient: for the mother, the operation - which generally lasts about half an hour - is little more than an amniocentesis and is performed with a small local anesthesia. Prophylactic antibiotic coverage and anti-inflammatory and tocolytic drugs are always given (to stop any uterine contractions).

Instead, there is one sedation for the fetus, so that it remains stationary. It is an intramuscular puncture which, always under ultrasound guidance, is made at the level of the fetal thigh or buttock. The injected drug also includes an analgesic component.

The inserted tube remains in the fetus's chest throughout the pregnancy and is removed by neonatologists after delivery.

The risks of the surgery

The intrauterine placement of a drain does not involve risks for the mother, but in 10-15% of cases it can occur premature rupture of membranes, an event that can occur at any time from surgery to termination of pregnancy. The risk of fetal death is 5-10%.

It should also be emphasized that there may be gods failures in the procedure. Sometimes, especially in the case of maternal obesity or for particular positions of the fetus, it is not possible to position the catheter well. Other times the child may slip off the drainage tube, or it may become clogged and no longer work. In these cases, it is decided whether to carry out a new intervention.

Sources for this article: consultancy from Dario Paladini, head of the Fetal Medicine and Surgery Unit of the Gaslini Institute in Genoa; Material from the fetal therapy portal of the Buzzi Hospital in our city; Article published on Ilfeto.com.

TAG:
Baby hygiene: everything you need to know ❯

How is blood group inherited?

Homozygous twins: what does it mean in a twin pregnancy

add a comment of Fetal hydrothorax: what it is, what it entails