Fetal suffering: when it happens and how to intervene 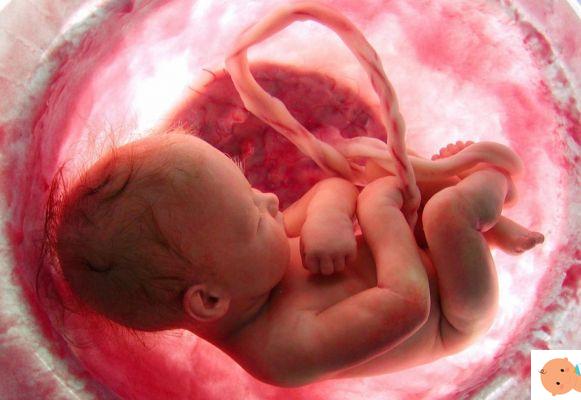 Fetal suffering: when it happens and how to intervene

La fetal suffering it is a complication that occurs only in certain circumstances, and which can have serious consequences. This is why it is important to monitor pregnant women and put into practice all the best practices to resolve it before it is late.

What is meant by fetal distress

When we talk about fetal distress we mean a poor supply of oxygen to the fetus: when the baby does not receive oxygen sufficiently, complications arise including the fetal suffering. This impairment arises when the exchanges between mother, placenta and fetus are no longer guaranteed by some factors.

La fetal suffering is a rare complication of labor e delivery, which affects very few children also thanks to the progress of science, which allows monitor the health of the fetus and the state of the placenta. It is more common in pregnancies beyond the term (also called post-maturity) and can be identified through some basic parameters controlled during labor.

Read also: Fetal suffering and green waters: my son had two loops of cords around his neck

As we said, the fetal suffering it is typical of the last stages of pregnancy, in particular of the labor and delivery: exchanges between fetus and mother are compromised and the little one no longer receives enough oxygen. Uterine contractions that are too close and too long, for example, can be among the causes of fetal distress, because they can hinder the blood supply to the intervillous chambers of the placenta. Even the excessively prolonged labor, for the same reasons, they could cause suffering to the fetus. There are also some abnormalities of the placenta, such as hypoxic placental lesions, L 'placental insufficiency acute (detachment), the funicular pathology (as a twist or knot of the cord) or again qualitative deficiencies of maternal oxygenation.

Among the main symptoms of fetal distress there is, of course, one abnormal heart rate of the fetus, monitored through the equipment connected to the mother. For this reason, even if for the woman it can represent a nuisance during labor, usually the parturient is connected to monitoring until the birth of the child.

However, if the labor is not yet in place, particularly in women beyond the term, the prolonged absence of fetal movements could be among the symptoms fetal distress: for this reason, if by any chance you are past 40 weeks and you do not feel the baby move for a while (unlike usual), go to the hospital to have a monitoring.

How to intervene in case of fetal suffering

Fortunately, most cases of fetal suffering manifests itself during the labor, already in the hospital, and is very often due to contractions too close togetherand or a excessive duration of labor same. In these cases, the monitoring allows you to see changes in the heartbeat of the fetus, which appears abnormal. At this point it is possible to intervene oxygenating the mother, who may be deficient due to contractions; increase i liquid intravenously; put the parturient on her side. When oxytocin has been used it is usually stopped and given instead analgesics or to slow down labor (in order to decrease contractions).

In the most serious cases, when these practices cannot be decisive, the woman is given birth quickly, or using tools such as forceps and suction cups, or directly by caesarean section.

La fetal suffering is a rare complication which occurs most of the time during labor, but which for this reason can be resolved promptly thanks to the monitoring of the fetus.

add a comment of Fetal suffering: when it happens and how to intervene