Fever in children: how to behave 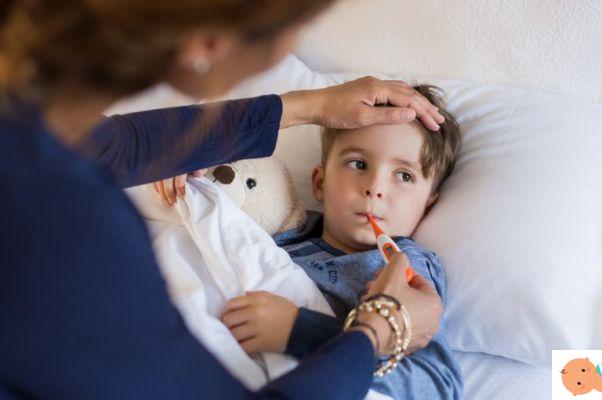 Fever is one of the conditions that most frightens parents, so much so that it is one of the most frequent reasons that lead them to ask for a pediatric visit. But generally, even when she is tall, she shouldn't be frightened nor worry too much (unless the child is very small: then, as we will see, it is better to go to the emergency room).

Let's see everything there is to know on the subject with the help of the professor Maurizio De Martino, pediatric immunologist, director of the Pediatric Clinic 1 of the Meyer Hospital of the city and coordinator of the Guidelines for the management of fever in children of the Del Paesena Society of Pediatrics, and professor Gian Luigi Marseglia, director of the pediatric clinic of the University of Pavia - Policlinico San Matteo, one of the drafters of the Guidelines.

The first thing to know is that a fever is a natural defense mechanism of the organism against pathogens because, explains De Martino, "at high temperatures, viruses and bacteria find it harder to multiply and, what's more, the immunological mechanisms work better". With a fever, therefore, the body creates an inhospitable habitat for microbes and stimulates the immune system to fight them quickly and effectively.

In this sense it is a positive phenomenon, which must not always and in any case be contrasted with drugs. However, it is clear that it must be kept under control to see how it evolves.

According to the World Health Organization one has to speak of fever only above 37,5 ° C. "Terms such as low-grade fever or low-grade fever should therefore be avoided - underlines De Martino - for temperatures below this threshold".

The body temperature varies regularly over the 24 hours: lowest at dawn, highest around 17pm, when it can exceed 37 ° C.

The most common causes

"In the vast majority of cases, the rise in temperature is caused by infectious diseases of little relevance, almost always caused by virus

or sometimes from bacteria"explains Professor Gian Luigi Marseglia." More rarely, inflammatory and autoimmune diseases, such as rheumatic diseases, could be involved.

Does the child have Covid-19?

How to distinguish a normal flu from Covid-19?

Unfortunately, it is impossible to distinguish the flu from Covid-19 from a clinical point of view. Hence the importance of vaccination (to limit cases of true flu as much as possible) and swabs, the only tests currently capable of making a definitive diagnosis of Sars-Cov-2.

In the case of children, very generally it can be said that if only one symptom is present - cold or cough, or fever - it is likely that it is not Covid-19 but another viral form. If, on the other hand, there are more than one symptoms, it is more likely that it is Covid. However, this is valid as a general indication to reassure individuals and families, but remember that pediatricians can request the execution of a swab even in the presence of only one symptom, because it cannot be ruled out that it is coronavurs.

If after a few weeks the fever has not passed and you have not yet understood what it depends on, we are talking about a fever of unknown origin: it does not mean that you will never understand what it is, but that more detailed investigations will have to be made to get to the cause.

"There is no scientific evidence to show with certainty a relationship between tooth eruption and high fever" specifies pediatrician Maurizio De Martino. "The studies conducted have shown at most one slight rise in temperature and only in a minority of children. The arrival of the teeth can give instead restlessness and intense salivation".

Also Read: Teething in Babies, Fever is a False Myth

How it is measured

The first thing to consider is that, in order to correctly measure the temperature, the baby must not be sweaty, hot and super covered and the environment must not be excessively hot. There is no point in doing this right after he has jumped like a madman on the bed or while he's hooked on a heated radiator or is wearing one sweater over the other.

With what is measured

As for the instrument, at home the digital thermometer (also called electronic) put under the armpit: it is very easy to read, provides the result in 1-3 minutes and is equipped with an acoustic alarm that signals the detection.

"On the other hand, both the oral measurement, which is not very precise, and the rectal, invasive and annoying one, should be avoided" underlines De Martino, who also advises against forehead, ear and pacifier thermometers which, especially in non-expert hands, can be very inaccurate. For the same reason it is better to avoid the liquid crystal strips to be placed on the forehead.

What about the old mercury thermometers?

They have now retired, withdrawn from the trade because they are considered risky (mercury is toxic). If there is still some at home, it is better not to use it for children, because the risk of breakage is high. These thermometers have been replaced by galinstane ones, containing a metal alloy of gallium, indium and tin: they are cheap and reliable, even more accurate than digital ones, but take longer to take the temperature.

"Contrary to what is often thought, having a more or less high fever is not in itself an index of the severity of the disease" explains De Martino. In other words, in general it is not certain that a very high temperature indicates a serious condition and, conversely, a contained fever a quieter condition: "You can have serious situations with low fever and very mild infections that give a very high fever". It is true though that a high fever can signal a severe bacterial infection if it is associated with other factors, such as age less than three months and altered values ​​of white blood cells or Reactive Protein C.

What to do when the child has a fever

Fever in infants and children under 12 months of age

"If the child with a fever has less than a month old should be taken to the emergency room as soon as possible, while in a month and a year - if it is in good general conditions - just schedule a same day visit, even at the pediatrician. "Maybe it's nothing, but it could be a serious infection, like pneumonia," says the doctor. Of course, the baby between one month and one year of age should be taken immediately to the doctor or to the emergency room if he cries inconsolably, refuses food completely or engages in behavior that causes mom to think "it's not him".

Fever in children over the year

If, on the other hand, it is bigger, you can simply do it keep in observation. As we have said, infectious diseases of little importance usually cause fever, almost always caused by viruses typical of the winter period (flu or parainfluenza) or, more rarely, by bacteria "explains Marseglia. Often in these cases a little rest it is sufficient and the fever should pass in 3 or 4 days, even without antipyretic, which according to the SIP guidelines should only be used in case of general malaise. If the temperature is high but the child is lively, he plays, he is all in all "fit", drugs can be avoided.

"But be careful - warns Marseglia - you need to consult the doctor immediately if the fever is accompanied by a rapid deterioration of the general condition. For example, if he is whiny, unable to get out of bed, refuses food completely or has other symptoms such as a persistent and persistent cough, a possible sign of bronchitis or pneumonia, or vomiting and diarrhea, usually symptoms of gastroenteritis ".

To the doctor with a fever


The child with a fever can safely go to the clinic: not only does his condition not worsen because of this, but in the office the doctor has any tools at hand for one first diagnosis (throat swab, urinalysis, micro blood sampling). Only if the fever exceeds 39 ° C, does not respond to drugs and the general conditions are such that it does not allow movement (for example due to very frequent vomiting or diarrhea) can a home visit be useful. 11 PHOTOS

Cold, cough, sore throat, earache and fever. Or vomiting and diarrhea. During the winter, children often get sick from influenza and non-influenza viruses. In most ...

Antifebrile, which ones to use

"When you really need a drug, you can give the paracetamol, to be administered preferably by mouth with a dosage that depends on the weight of the child and not on his age: 10-15 mg / kg every 4-6 hours, up to a maximum of 60-80 mg / kg per day "explains De Martino. Two-year-old, small and skinny, may need a lower dose of acetaminophen than a chubby one-year-old should use.

Paracetamol should be used in drops or in syrup, to be measured with the dispenser present in the package. The more invasive and annoying suppositories, on the other hand, should be taken into consideration only when the child vomits or is really unable to take the medicine by mouth.

As an alternative to paracetamol, ibuprofen can be used, but it is not recommended under three months of life (or under 5,6 kg of body weight), in dehydrated children and in those with chickenpox.

The important thing is not to alternate ibuprofen and paracetamol in the administration.

The combined or even alternating use of paracetamol and ibuprofen and that of acetylsalicylic acid and cortisone drugs should be absolutely avoided.

No to preventive antifebrile after vaccination

1. remember that antifebriles are not used to prevent risk of fever occurring after vaccination. Therefore in this circumstance they should not be given in advance, but only if fever and malaise actually appear. Likewise they do not prevent the risk of seizures.

Read also: Convulsions during fever, what to do

2. As far as the antibiotics, "they must be given only if there is a well-founded suspicion of an infection of bacterial origin and of course it is only the doctor who can establish it" declares De Martino peremptorily. Of course, the antibiotic should not be given in case of flu or rhinitis, which are caused by viruses.

Sponging with lukewarm water, rubbing with alcohol, applications of ice packs: Do Old Fever-Lowering Remedies Really Work? The scientific data available on the effectiveness of these practices - few - seem to indicate that they are of little or no use, and that, moreover, they can annoy the child, if not become counterproductive.

"Fever is a rise in body temperature controlled centrally by the brain, therefore it is not possible to intervene by cooling the periphery" explains De Martino. "On the contrary, by cooling the extremities too much, the body is forced to produce more heat and the temperature rises". That is why these physical means should be avoided, unless it is a matter of fever but of heat stroke: in this case they are useful.

Other small remedies can be useful to relieve other symptoms possibly associated with fever: the classic glass of hot milk and honey, for example, it tastes yummy and some studies actually pointed out honey's effectiveness in relieving some respiratory symptoms. "But be careful - warns De Martino - after you have to remind the child of Brush your teeth, because honey causes tooth decay ".

In the presence of a a runny nosein addition, nasal washes could also help.

add a comment of Fever in children: how to behave