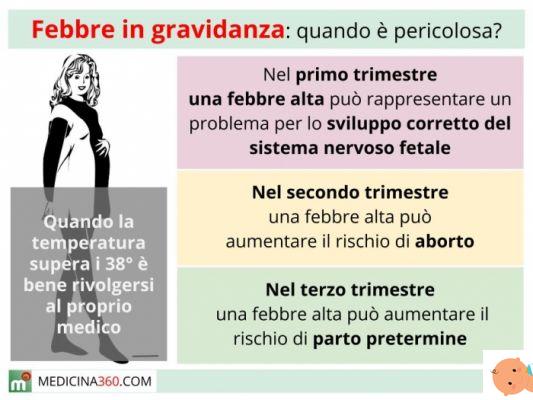 La fever in pregnancy it can come either from causes unrelated to pregnancy, such as a flu or an infection, for example to the urinary tract, both - more rarely - for complications related to the pregnancy itself. Here is when she can be dangerous and how to behave, with the advice of the gynecologist Valentina.

A slight rise in temperature? Do not worry: it is a symptom of pregnancy

“The first thing to know is that a slight rise in temperature from early pregnancy is absolutely normal,” she explains. The temperature can rise to 37,1-37,2 ° C, but it is not really fever: it is an increase determined by the effects of progesterone, the hormone that supports the uterus in the early stages of pregnancy.


“A slight rise in temperature is even diagnostic of pregnancy. To talk about fever we have to get to at least 37,5 ° C ".

How to distinguish Covid-19 from the flu?

Fever in pregnancy, the most frequent causes

One of the most common causes of fever in pregnancy is the flu, or the flu-like syndromes that strike during the winter season. “In general, they are typically the infectious diseases to cause fever in pregnancy. Among these, in addition to the influence, we can mention the urinary infections such as cystitis (bladder infection), but especially the pyelonephritis (kidney infection) ".

"Sometimes a fever in pregnancy can be due to complications of the pregnancy itself," explains the gynecologist. For example:

“These are rare cases, but potentially dangerous. Because of this in the presence of fever, abdominal pain and possibly losses it is advisable to go immediately to the obstetric emergency room for an immediate assessment of the situation ”he advises.

Read also: Amniocentesis and CVS: what are the real risks and what precautions to take to reduce them

Fever in pregnancy, risks and dangers

Some of the risks that occur when a fever occurs in pregnancy actually depend on the causes that caused the temperature increase. Thus, for example, respiratory complications such as pneumonia are possible in the case of influenza and the risk of generalized infections and dehydration, as well as preterm birth, increases.

"This is why prevention is important, with the flu vaccine, recommended by the health authorities for women in the second or third trimester of pregnancy, but also for those who are planning to have a baby," she recalls.

Read also: Vaccines for childbearing age and pregnancy: the recommendations of the Ministry of Health

And urinary infections can also carry the risk of premature birth.

More controversial, however, is the association of high temperature with congenital malformations: An American study published in 2022 highlighted a slight increase in risk of fever in the first quarter, which was not observed in a Danish study published in the same year. However, the Centers for Disease Control in Atlanta, United States, reports that "fever may be associated with the risk of neural tube defects (such as spina bifida) or other adverse events for the developing child" .

How to lower fever in pregnancy

The antipyretic drug of first choice in pregnancy is the paracetamol, considered safe but to be used, like all drugs, only when needed, at the lowest effective dose and for the shortest time possible.

“Then obviously the doctor will recommend any other drugs, such as antibiotics or steroids, if she thinks there may be other complications such as bronchopneumonia, ”she says, reassuring that various drugs can be used safely during pregnancy.

Alongside drugs (when they are really needed), supportive therapy is also fundamental: "Plenty of rest and adequate hydration”Suggests the specialist.

As for the natural remedies, better go there with great caution. “Green light to grandma's remedies like hot broth or cup of milk with honey (unless you are diabetic and have received special dietary recommendations) "he explains." Instead, you have to be very careful with herbal remedies (such as propolis), which are often proposed as 'calm' but which in pregnancy it would be better to avoid and in any case not to use without the supervision of an expert doctor ".

TAG:
Fever in children: how to behave ❯

add a comment of Fever in pregnancy: causes, risks and remedies