Fifth month of pregnancy: development of mother and baby 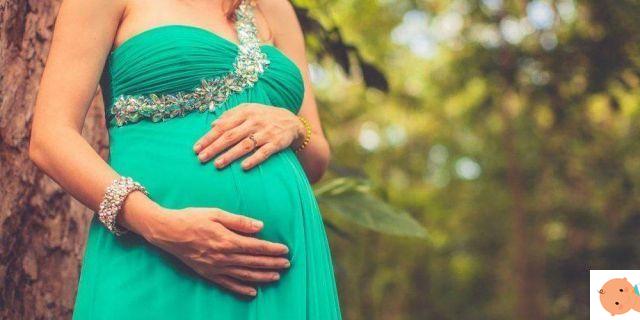 Fifth month of pregnancy: and here we are halfway to motherhood! For most mothers this is the best time, the one in which you enjoy the baby bump the most. The ailments have practically disappeared, you feel less tired and very energetic, you can start shopping for the newborn more peacefully. By now, the first clear movements of the puppy are almost certainly felt. And, with a little luck and cooperation from the unborn child, you may even know her gender. Here is everything you need to know about this period of pregnancy.

Fifth month of pregnancy: how many weeks does it correspond

Fifth month of pregnancy: what happens to the mother

As mentioned above, this is by and large a relatively peaceful month for mom. It goes without saying that there are exceptions and we certainly don't want to forget those who have a complex pregnancy. Unfortunately, there are those who are forced to spend it in bed due to various problems. Or who has to do with vomiting that does not go away (it is called hyperemesis gravidarum). Or, again, there are women who already have other children and therefore do not really know the meaning of the word relaxation.


Generalizing, however, we can say that it is a fairly quiet period. As already happens from the fourth month of pregnancy, weight tends to increase with a certain speed and care must be taken not to overdo it. Pay attention also to all prohibited foods: if you are not immune to toxoplasmosis, no to raw foods, especially meats and cured meats. Fruits and vegetables should be washed with particular care and, when possible, peeled.

The belly is now very evident. The uterus has enlarged and is pressing against the bladder. The urge to urinate may therefore be more frequent and urgent. But not only. Breathing may also be more difficult due to the pressure on the baby's diaphragm. Overall, however, you are very beautiful: the hair grows and is strong and the skin is also brighter. If you had pimples early in your pregnancy, they are probably gone now.

Fifth month of pregnancy: what happens to the baby

The baby begins to move around the eighth week of pregnancy. Movements can now be distinguished much more clearly. There is no precise time when this happens, but typically between weeks 19 and 21 almost all mothers perceive soccer. Those in their first pregnancy notice it a little later than mothers who have already had children.

The growth of the fetus is always constant and never stops. The body is covered with two substances, vernix and fluff. They serve to protect the skin, a thin and very delicate layer, from the amniotic fluid in which the baby is immersed. From the 17th week, subcutaneous fat begins to form, but initially the quantity is minimal. Hearing always works better: in the case of loud sounds, the baby bump may wince.

Disorders of the fifth month of pregnancy

If some typical first-trimester complaints, such as nausea and sleepiness, have disappeared, others may have presented themselves. Most of these concern the gastrointestinal system. Heartburn, constipation and hemorrhoids are the most common.

Fourth month of pregnancy: what tests to do

As we have already said in our article on the fourth month of gestation, the Tri-test and blood sampling (including Toxo test for toxoplasmosis and Rubeo test for rubella) must be carried out by week 18 + 6. If there are particular indications (such as a previous pregnancy with gestational diabetes), the glucose load curve should also be made. The Toxo test must also be repeated between weeks 19 and 23 + 6.


Morphological ultrasound and amniocentesis are also among the tests carried out by the National Health System. The latter is prescribed by the gynecologist in certain cases.

The morphology is one of the fundamental ultrasound scans of pregnancy. It is performed during the fifth month, between the 19th and 21st week. In this gestational period, the proportions of the fetus, its movements and the amount of amniotic fluid are optimal for visualizing many fetal parts.

The exam involves the standard measurement of a series of structures (head, abdomen, femur) that give information on growth and the study of all the systems that can be explored in these weeks. Most of the organs are already formed by the first trimester, but the increase in volume and their function make the observation more precise and detailed. Only the brain continues its development until the term of pregnancy, so there are pathologies related to this late stage of formation that cannot be diagnosed.

If you haven't known it yet, very often the morphology is an opportunity to know the sex of the baby on the way.

Together with CVS, it is a procedure used for the diagnosis of some genetic diseases. It is considered invasive because to perform it it is necessary to withdraw amniotic fluid through a needle inserted into the abdomen. Although low, there is a risk that the technique will cause an abortion. However, a recent Danish study concluded that if amniocentesis and CVS are done by well-trained staff, the risk would be between 0,1-0,2%.

Amniocentesis is done between weeks 16 and 18. It detects anomalies in the number and shape of chromosomes. Each of these variants can be associated with a specific disease, such as trisomies 18 and 21. The indications for this examination are many:

Amniocentesis is performed under ultrasound guidance. A thin needle goes through the mother's abdomen and reaches a sac of amniotic fluid, far from the fetus. The exam takes a few minutes and is painless, but a local anesthetic can sometimes be used. Doctors always recommend 24-48 hours of rest after undergoing the exam.

Typically, results are delivered in about 15 days.

If there are no contraindications on the part of the gynecologist, there is nothing to prevent physical activity during pregnancy. It's not just a way to keep your weight under control - the benefits are huge. Sport improves muscle tone, breathing, psychological well-being and much more. You just have to pay attention to the activity you choose.

There are sporty mothers who do not abandon their discipline even for one day of their pregnancy. Then there are those who are not really "fanatics", but who understand the advantages of the movement and put it into practice more or less regularly. But which activity to prefer?

The important thing is that the movement is constant and moderate. There is little point in "killing one's life" twice and then quitting. Better to opt for half an hour a day but well done. The disciplines are different, it all depends on your personal tastes. Yoga, swimming, gentle gymnastics, pilates, walking are perhaps the best. Sports that involve jumps or excessive fatigue should be avoided. However, the safest thing to do is to ask your gynecologist: no one knows us better than him.

Fifth month of pregnancy and shopping for the baby

You finally know if there is a baby or a baby in the belly. The time has come to embark on the funniest shopping of the whole pregnancy: the one for the baby on the way! We know that you have been trying to put a stop to yourself so far, but knowing the sex seems to give a different impetus to purchases.

Please note that some items may not be available immediately and must therefore be ordered. The trio is one of them, as is the cradle. Depending on the preferred model, it could take 2-3 months so the period is perfect (even if they arrive a few weeks before the expected date of birth it is not bad: maybe the baby decides to surprise mom and dad).

As for the colors, the advice is… indulge yourself! Go beyond the classic pink and blue for girls and boys, but also range with more. Yellow, green, orange, white are beautiful. You will not regret it.

Smart shopping? Just make the birth list! By choosing the products one by one there is no risk of receiving duplicates or unnecessary gifts and every mother is sure to order only what she needs. The catalog is huge (around 100.000 products), there is a welcome gift and the list is free.

The eighteenth week of pregnancy

Starting from the eighteenth week of pregnancy it could happen that you feel fatigued even after just a flight of stairs. All normal: between the weight that increases and the circulation that becomes more difficult is a symptom that is there. The growth of the child proceeds. Now he has developed his taste buds and can recognize various tastes. He weighs about 150 grams.

The nineteenth week of pregnancy

Regardless of the season, you may sweat more during the nineteenth week of pregnancy. This is why it is important to wear clothes in fabrics that allow transpiration, such as linen and cotton. The baby spends most of its time sleeping, but its development continues even while it rests. Heard the first football?

The twentieth week of pregnancy

By the twentieth week of pregnancy you are halfway through the process. Time passed quickly, right? It seems like yesterday that the test was positive! Against some discomfort (for example, the first signs of back pain) it is very important to move. Just choose the most congenial physical activity. The baby is covered in vernix and fluff. The latter helps him to keep his body temperature constant.

The twenty-first week of pregnancy

By the twenty-first week of pregnancy, you will almost certainly know if you are expecting a boy or a girl. Be wary of guessing by looking at the shape of the belly: there is no scientific proof. It is time for morphological ultrasound to check all the systems and organs of the fetus. If suddenly a lump appears on the belly, caress it: it can be a foot or a little hand.

add a comment of Fifth month of pregnancy: development of mother and baby