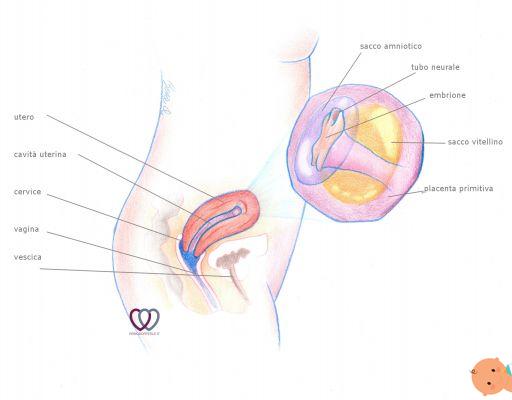 From the first to the fifth week of pregnancy

For this, the first weeks of pregnancy should be considered together. Here's what happens to your body and baby in weeks 1-5 of pregnancy. With the scientific advice of gynecologist Elisabetta Canitano, president of the non-profit association Vita di donna.

Symptoms of the first weeks of pregnancy

However, these signs are not enough to believe that conception has occurred (because the lack of menstruation could also depend on other reasons), but it suggests to carry out the pregnancy test. You can do the test from the first day of your missed period (or even earlier, with some early tests on the market). All you need to do is use a do-it-yourself kit from a pharmacy or supermarket.

La basal temperature (body temperature after a rest period) is of about 37 degrees, while if the conception has not happened, when the menstruation arrives it falls below this threshold.

In the urine compare HCG beta (human chorionic gonadotropin), which is detected by the pregnancy test. This hormone is secreted by the first abruption of the placenta, the trophoblast.

What if there are no symptoms of pregnancy?

Lack of symptoms is quite rare but it is possible. Most of the time, however, episodes such as vaginal secretions, nausea, frequent urination or the aforementioned tension in the breast, without tracing them back to a possible pregnancy.

In any case, if a test confirms that conception has taken place and no symptoms are found, generally you don't need to worry. The only serious case that can justify the lack of symptoms is a miscarriage that occurred in the very first weeks.

Dosage of beta-HCG in the blood

Dosage of beta-HCG in the blood: is it really needed? For some time, there has been a trend towards measuring beta HCG in the blood, in order to establish whether pregnancy has begun. In reality, except in special cases, there is no reason to routinely perform the pregnancy test on blood as well.

Read also: Ultrasound in the fifth week of pregnancy: what can be seen?

Aches and pains in the first weeks of pregnancy

About 5-12 days after conception, which takes place in the tubes thanks to the meeting between a sperm and an oocyte, the first cells from which the baby will develop are implanted in the wall of the uterus. Implantation can occur without any symptoms or it can cause light bleeding (no more than a few drops). The blood is generally brown or pink and in these cases we speak of plant losses.

There is absolutely nothing to do, because this secretion is physiological, that is, normal. Only if the loss becomes important (more than a few drops) or if stomach pains appear, it is advisable to contact the operator following the pregnancy.

Taking medications in the very first days of pregnancy

Sometimes, you may have taken some medication, or been exposed to toxic substances (such as x-rays or alcohol) before you know you are pregnant. In general, the "law entirely or not at all". It means that these risk behaviors either cause immediate and early termination of pregnancy, or cause no harm to the baby.

What to do in the first weeks of pregnancy?

The fetus in the first weeks of pregnancy

Your baby was conceived approx 14 days after the start of your last period. Conception took place in the fallopian tubes: the oocyte and the sperm met and gave rise to the "zygote", the cell from which the baby will develop.

After forming, the zygote begins to migrate to the uterine cavity, where it will nest. This journey takes about 3-5 days and another 24-48 hours are needed to reach the implantation area: during this time the product of conception continues to grow, that is, to enrich itself with numerous cells. After nesting, the future baby is called an "embryo" and is made up of several hundred cells.

Between the ninth and thirteenth day after conception, the so-called "attachments", that is, the trophoblast, the chorion, the amniotic sac, the umbilical cord.

Between 14 and 16 days after conception, the embryo is similar to a disc formed by three very thin superimposed sheets, i embryonic leaflets. From the outermost leaflet skin, hair, nails, brain, eyes, ears, nose and mouth will develop. From the central one will originate muscles (including the heart), blood vessels, genitals; while from the innermost leaflet the digestive system, lungs and bladder will be formed.

The gestational chamber is the structure that is created inside the uterus for host the embryo. Normally the appearance of this "chamber" - found during the first ultrasound - is one of the first evident signs that determine the onset of a pregnancy.

What if the gestational chamber is not seen?

Sometimes it can happen that the gestational chamber is not detected during the first ultrasound. One reason may be that the embryo is smaller than expected, perhaps due to an error in the calculation of conception. There is also the possibility that it is an extra-uterine pregnancy.

In the most serious cases, however, the absence of this structure signals the failure of the egg to develop and therefore the prelude to a spontaneous abortion.

What are the annexes

What month of pregnancy is the fifth week in?

The fifth week is conventionally still in the first month of pregnancy, although it is an intermediate period.

When do you start to feel the heartbeat of the fetus?

If the embryo has already reached sufficient size, the heartbeat can be felt as early as the sixth week of pregnancy.

TAG:
Fifth month of pregnancy: symptoms, emotions and visits to be made ❯