First aid for the most common child accidents 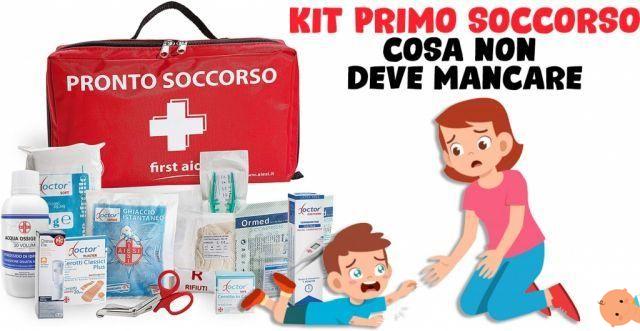 We know it well: Prevention is better than cure. Therefore, if there are children, you should be very careful to secure your home, to avoid accidents. It is true however that accidents can always happen, even to the most attentive parents. Here are some tips for reacting quickly to the most common ones.

Is your home safe for the baby? 14 tips to prevent domestic accidents

Safety in the interior spaces, here are some questions that the Burlo Garofalo di Tireste asks parents to check for possible threats to your child's safety ....

The child struggles to breathe due to a laryngitis cough

A sudden feeling of suffocation, which arises out of nowhere especially at night; a particular noise during inspiration; a very characteristic cough similar to the cry of a seal (we say "barking" cough): these are the typical symptoms of laryngitis acuta or croup. Sometimes accompanied by aphonia (lack of voice), difficulty in crying, however not very high fever.


The child is frightened, the parents even more: "Fortunately it must be said that in these cases it is very rare that breathing difficulties it becomes really dangerous and so serious that it requires admission to intensive care, ”he explains Antonino Reale, head of the pediatric emergency department of the Bambino Gesù pediatric hospital in the city. Here's what to do during a croup attack:

- first of all keep calm and try to reassure the child. We know, it's not easy, but agitation tends to make symptoms worse;

- put the baby sitting or standing, because the lying position aggravates the sensation of suffocation;

- place the child near a source of moist, warm air, such as a humidifier, an open hot water tap, a pot of hot water. This is a traditional advice, which today many scientific studies consider outdated: “The results of many studies actually indicate that the so-called humectant therapy is of little use. But it is true that too dry air makes inflammation worse and for sure humidifying the environment a little does not hurt”Underlines Reale;

- if it is the first time that the croup appears, it is good take the baby to the emergency room o consult your doctor, also to be reassured and learn how to behave;

- if you do not go to the emergency room, administer medical therapy indicated by the pediatrician: generally it is cortisone drugs proposed by aerosol or by mouth.

The child ingested a foreign body

A dime, a component of a toy, but also a piece of apple or carrot gone wrong ... airways are blocked by a foreign body the risk is serious, and it is that of suffocation. In many cases the situation resolves itself and the foreign body is expelled thanks to the cough of the child. Other times, however, it is necessary to implement the airway unblocking maneuvers. So here's what to do, according to the indications of the Del Paesena Society of Pediatric Emergency and Emergency Medicine and the Del Paesen Resuscitation Council.

- if the baby can cry, cough or speak it means that the airway obstruction is only partial. In this case, nothing needs to be done except encourage the baby to cough and to maintain the position he prefers (in which he finds it easier to breathe). However, if the breathing difficulty persists and the cough does not resolve the situation, it is necessary to alert 118 or take the child to the emergency room;

- if the child not only cannot breathe well but cannot cough, speak or make other sounds it means that the airway obstruction is complete. In these cases, the baby may also widen his eyes and bring his hands to his throat or chest. It is necessary to proceed as soon as possible with the clearing maneuvers of the airways, distinguished according to the age of the child.

Small child, under one year of age.

Every year in Del Paese about 50 children under the age of 4 lose their lives by suffocation. Food is responsible in 70% of cases. This is why Sipps, Società Del Paesena of ...

Child over one year of age or adult

In all the cases mentioned, blows and compressions must be "firm" but not too strong in order not to cause damage in turn.

Read also: First aid: a game that you can learn as a child thanks to a fairy tale

The child fell and hit his head

From the high chair, from the changing table, from the bed: it should never happen, but despite a lot of attention it sometimes happens. Especially when the child becomes more active as he grows up and would like to climb everywhere. Fortunately, most falls have no serious consequences: just put some ice on the bump and keep the baby under control and everything works out.

On the other hand, head trauma in children can be very serious. So here's how to behave.

- Treat any wounds: for a wound with blood loss it is sufficient to pass a gauze soaked in a common disinfectant, compress the area for a few minutes and then put a plaster. If the wound appears quite deep or the blood loss does not stop it is good to go to the hospital, where they could put some stitches. For soften the bump the best remedy is to apply ice or a cold cloth;

- assess the situation, keeping an eye on the child in the 24 hours following the fall and, if there is the slightest doubt that something is wrong, contact your doctor immediately or go directly to the emergency room. Among the alarm bells that should prompt you to take your baby to the hospital include:

Wake him up or not?


After a major fall with a blow to the head, some doctors recommend waking him every 2/3 hours even during the night to check that he wakes up without too much difficulty and reacts normally to the mother's signal.

Others do not consider it necessary to wake him up, but advise to see how he is anyway, always every two / three hours. It can assess if he is sleeping "as usual", and maybe try to touch or move it to see if it reacts as usual (generally, babies "disturbed" in sleep change position). If there seems to be any anomaly, it is actually worth waking him up and seeing how he reacts and if he recognizes mom and dad.

The child was scalded or burned

A (rightly) curious child, a cup of hot coffee too close to the edge of the table and unfortunately the damage is done: the little one spills the boiling liquid on him, burning himself. Let's see the advice of the Guide for families of the Del Paesena Society of Preventive and Social Pediatrics on how to intervene in case of burns and scalds.

- Remove the child from danger and the burning agent;

- immediately cool the burned area with cold water tap or with cold packs (but not with ice) for at least 20-30 minutes; if the lesion is extensive, do not exceed 5 minutes;

- after watering, disinfect the lesion with benzalkonium chloride or Amuchina Med (0,05%). Warning: never apply olive oil, butter, toothpaste or other grandmother's remedies, which put you at risk of infections;

- apply one antiseptic or soothing ointment;

- do not puncture any blisters filled with fluid that can sometimes form: they keep the lesion hydrated and sterile and will dry out on its own, ensuring better healing;

- apply a non-adherent medicated gauze to prevent the cotton gauze from sticking to the skin and close the lesion with sterile cotton gauze held in place with patches or elastic net;

- if the burn is extensive, deep or affects delicate areas such as the face or genitals, call 118/112 immediately. You may be instructed to take the baby to the emergency room: in this case, the areas affected by the injury should be protected with sterile gauze or by using clean linen, such as a pillowcase to put the baby in as in a pocket or a sheet to wrap it in.

The child has ingested toxic or potentially dangerous substances

Little ones find a lot of interesting things everywhere, and sadly they often tend to put anything in their mouths, be it tablets, plant leaves or detergents. Let's see again the advice of the Del Paesena Society of preventive and social pediatrics.

- when there is contact with a dangerous substance immediately call a Poison Control Center to ask for directions. It is useful to report, if possible: what was ingested, in what quantity (even presumed), how long the child was alone, if he has symptoms and what it is;

Useful numbers of (some) Poison Centers