First-born, second-born and middle child: how much the order of birth affects character 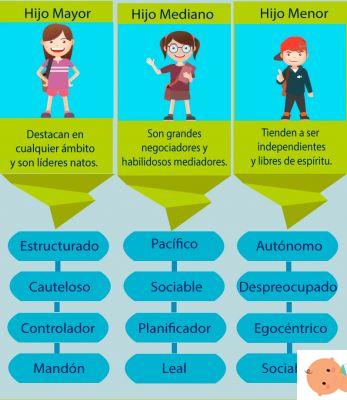 First-born, second-born or middle brother? Can the order of birth affect a child's character? Certainly many factors contribute to sculpting an individual's personality: genetics, environment ... but the order in which one is born also plays an important role.

According to a study by American psychologist Frank J. Sulloway, children are distinguished mainly by the strategies with which they try to capture the attention and favors of mom and dad.. The first child generally tends to defend authority, while the younger ones tend to question it and choose the path of rebellion.

The first born is more likely to be a leader

Kevin Leman, psychologist and author of the books: "The book on the order of birth" and "The advantage of the firstborn", explains that the firstborn grow up under closer control than their siblings and because of this greater discipline they achieve better scholastic results and succeed. to conquer leadership positions. "Many of the presidents of the United States of America are older brothers," Leman says.


To confirm this role of the first-born is a publication of 2022, in which the American psychologist Alan E. Stewart examined more than 500 studies published in the last 20 years and found that the first child is the one who is most likely to take a leading position and always tries to accomplish their goals. Also Read: Smarter Firstborn? Yes, but a little ...

But the eldest is also the conformist son, at least according to a 2009 study published in the newspaper "Child Development". THEThe conformism of the firstborn serves to satisfy the parents. And this explains the good academic commitment.

According to the Belgian psychologists Vassilis Saroglou and Laure Fiasse, in their study published in "Personality and Individual Differences", the typical traits of the first-born are: responsibility, competitiveness and conventionality. While the minor children try to distinguish themselves by creating their own niche made of games and rebellion.

Is the first born smarter?

The eldest has an IQ point higher than the other siblings, but the difference is too small to have practical effect in everyday life. This is what emerged from a study published in the autumn of 2022 in the Journal of Research in Personality, the largest that has ever analyzed the relationship between birth order, personality and intelligence. As the authors explain, a team of researchers from the University of Illinois, the differences that emerged from the study, although statistically detectable, are however too low to have concrete effects on people's lives, and would therefore confirm that stereotypes on first-born and second-born in so many families, they are nothing more than this: stereotypes.

Over 370 American high school children participated in the study, whose IQ and analyzed the main traits of personality, taking into account a long series of factors, such as the socio-economic status of the family of origin, the number of siblings and the age difference between them, which could have influenced the results. As we said, the analysis revealed some characteristics related, at least on average, to birthright: an extra qi point, and a more outgoing, helpful, conscientious personality and less likely to suffer from anxiety. Both for intelligence and for personality, the researchers concluded, however, these are infinitesimal differences.

The youngest son: creative and rebellious

The little one of the house is clearly distinguished from the older ones: he is the most creative and often rebellious.
"Young children are often manipulative, outgoing, excellent salespeople. They learn to get away with it right away and know how to juggle people, "explains Leman.
But as pointed out by Patrick R. Cundiff of the University of Pennsylvania (USA), there is no relationship between the last born and delinquency (a correlation suggested by popular beliefs).


Read also: All the benefits of having an older brother

10 tips to survive the arrival of your second child

Is life as a four upsetting you? The arrival of a second child can be tiring and stressful for moms at times. For this reason we have collected some practical tips for ...

The middle child, the most sociable and negotiator

According to an article published by a team of psychologists in 2022 in the "Journal of individual psychology", the middle child develops good social skills. It is at ease with both small and large children.

Moreover, precisely because it is halfway between the older brother and the little one, the middle child is a great negotiator and always works to find a compromise, explains Leman. Difficult to tame him, but he has the merit of believing in the value of friendship.

UK: six twins are not enough. The seventh pink bow arrives at the Walton house

They had become famous in the XNUMXs. Six girls, six twins, all girls. They are the Waltons, a large English family from Liverpool known for being the first couple in the world to have ...

How should parents behave?

The true mission of mum and dad is to help their children on their only "journey". So says Gail Gross, an expert in child development. "Children must be used to finding their own destiny, whatever their role in the family".
Valuing the aspects that make your children unique, respecting their strengths and weaknesses, treating them each in a different way, in the best way.
Read also: Having three children instead of two: discover the 16 differences (semi-series)

TAG:
Princesses and blue princes: tips to get rid of toxic myths ❯

add a comment of First-born, second-born and middle child: how much the order of birth affects character