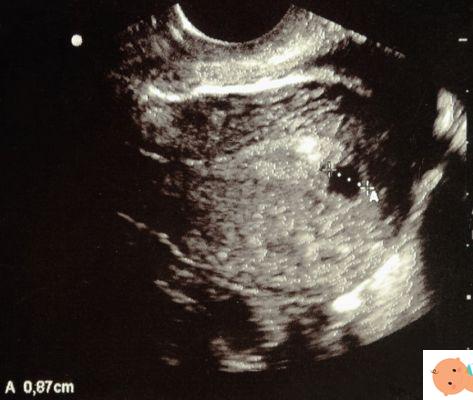 It is the first meeting, one of the most exciting, of future parents with their child. Let's talk about the first ultrasound, which is typically performed in the first trimester of pregnancy.

The first ultrasound at how many weeks is it done?

It depends. If done early, around 6-7 weeks, what you see is just a "green bean" with a small beating heart. If performed later, after 10 weeks, a "miniature baby" can be seen instead. In both cases, the tear is guaranteed for mom and dad. (Read also: the first gynecological examination in pregnancy)

What information does the first trimester ultrasound provide

What it consists of

The 12th week ultrasound is done via a gynecological examination. The doctor may possibly also carry out aechography.

In the first ultrasound we see:

The first trimester ultrasound allows first to discover the number of fetuses present, and therefore of understand if the pregnancy is single or twin, and their vitality. It also helps you establish accurately the time of pregnancy correcting, if necessary, the estimated due date calculated on the basis of the last menstruation. For this, it is often known as dating ultrasound.

It's not all. If done around 11-12 weeks, an ultrasound allows you to do one first evaluation of the anatomy of the fetus, identifying any anomalies that, at this time, are generally very important. "For example, we can already highlight some anomalies of the heart, which completes its development at 10 weeks" underlines Nicola Persico, XNUMXst level executive doctor at the Obstetric and Gynecological Clinic in our city. "In this way, suspicions can be identified for additional investigations, such as a level II ultrasound or fetal echocardiography."

The same goes for other organs or other anatomical parts, such as the brain, stomach, bladder or limbs, of which the most serious malformations can be highlighted as early as 13 weeks. And the kidneys? "At this time it is difficult to discern exactly the renal lodges, which will delineate well from the 18th week, however the visualization of the bladder alone is an important indicator of the presence of at least one kidney", specifies Rossana, specialist in gynecology and obstetrics. in Genoa.

Read also: The first visit to the gynecologist in pregnancy

The nuchal translucency, the combined test and the fetal DNA test

Also during the first trimester, and precisely between 11 and 13 + 6 weeks, the ultrasound can be part of the combined test (or bi-test or ultrascreening), a screening test for some chromosomal abnormalities and in particular Down syndrome, or trisomy 18 or trisomy 13.

It is a test that combines the measurement with ultrasound of the so-called translucenza nucale - that is, the measurement of a small layer of liquid that collects behind the nape of the fetus in this gestational period - at maternal blood dosage of two substances of placental origin, Beta-hCG (free beta fraction of chorionic gonadotropin) and PAPP-A (plasma protein A associated with pregnancy).

Overall, the values ​​obtained from these tests, together with the maternal age data, provide an estimate of the risk that the child may be affected by a chromosomal abnormality. If this risk is increased by the combined test, the woman will be able to evaluate the opportunity to undergo invasive tests, such as villocentesis or amniocentesis, to have a certain diagnosis.

Warning: the combined test is not performed routinely, but only after the woman has received adequate information about it and has given her consent to undergo the examination.

The fetal DNA test is a screening test. It can be done starting from the XNUMXth week of pregnancy and its main advantage is that it is an absolutely non-invasive examination, which therefore it does not involve dangers for the mother and the baby. Compared to the Down syndrome risk estimate, fetal DNA testing is currently the most accurate screening test.

If successful furthermore, the result must be confirmed with an invasive method during the fetal DNA test.

How much does the fetus grow compared to the belly: the images

How and how much does the fetus grow in the belly in 40 weeks of gestation? The development in 31 images recreated on the computer.

I still didn't believe it ... It was very strange that feeling of having a dot inside that after a few months would become a puppy (my sweet Asya) We had just got married, our life was not economically the best yet, only he worked and we were still from mine. In fact, our little ant was really unexpected ... It was December 20, 2022, the echo was at 17.00. My husband that day finished work at 19 pm, I decided to be accompanied by my mother, who from happiness was skyrocketing even though she was the third granddaughter ...

Read also: Ultrasound in the fifth week of pregnancy

First ultrasound in pregnancy: is it internal or external?

Ultrasound done at as early as the sixth week is transvaginal.

When to do the first ultrasound?

It should be done between 6 and 14 weeks.