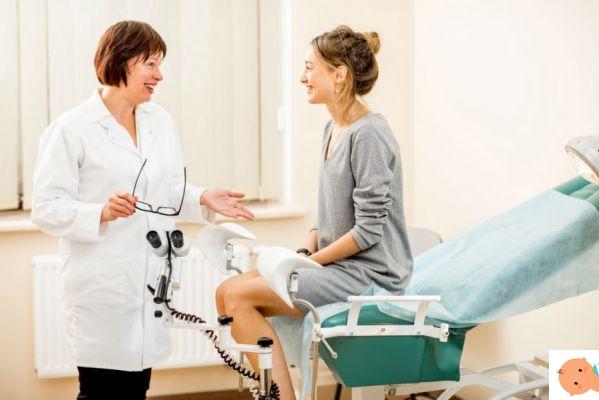 What happens during the first visit to the gynecologist during pregnancy?

The main purpose of the first visit, observes Bianchi, "is to collect all possible information on the history of the future mother and of the family that may indicate elements of specific risk for the pregnancy itself and for the unborn child". The elements are of two types:

1) Maternal pathologies, that is, linked to the mother's health, which may in some way be detrimental to the physiological course of pregnancy. A few examples: hypertension, diabetes, previous embolic or thrombophilic events. The (less frequent) autoimmune pathologies and many other pathologies that can influence the success of pregnancy also fall into this category;


2) Genetic-familial disorders, that is, present in the family tree, which can be transmitted to the unborn child even if the parents are healthy. There are thousands and thousands of these pathologies, some very rare. Two examples, relatively common in Del Paese: Mediterranean anemia and cystic fibrosis. Genetic pathologies are identifiable in the unborn child through an invasive examination (villocentesis or amniocentesis).

During the first visit, the gynecologist must collect information on some transmissible infectious diseases, of a viral order, which can be easily ascertained with blood tests. These are: rubella, cytomegalovirus, toxoplasma, hiv, syphilis. All these pathologies, if present in the form of infection, can cause serious fetal pathologies. Other blood tests are also needed to get an idea of ​​the main functions of the expectant mother. In particular, these are: blood counts to verify the absence of anemia; blood sugar to establish the absence of diabetic diseases; transaminases to rule out liver disease; - creatinemia for kidney diseases.

During the first visit, the gynecologist also arranges a urinalysis, which must be repeated monthly. “Proteinuria - explains Bianchi - is the easiest index to detect gestosis (or preeclampsia). Urine testing is therefore essential in the third trimester of pregnancy, when the risk of gestosis or hypertension superimposed on pregnancy increases. It is a basic exam, so it is done in the first quarter and then repeated ".

The other frequent problem in pregnancy is asymptomatic bacteryrinuria, or the presence of bacteria in the urine, which "may not cause any disturbance but which may constitute an element of risk, albeit modest, for a preterm birth".

The gynecologist must also check when the patient has had the Pap test because "it is important to know that the pregnant woman does not have, for example, a pathology in the cervix". If the patient does not have a recent Pap smear “it is advisable to do it during pregnancy. It is not harmful and it is useful to have it ”.

The gynecological examination is important because it could highlight genital pathologies with consequences on pregnancy. An example: the presence of fibroids in the uterus; if they were of significant size or with specific localization, such as very low or submucosal, they could jeopardize the pregnancy itself or in any case give a series of complications.

The gynecological examination is essential for women who have already had pregnancies (especially abortions) also for the evaluation of the cervix, in the sense of a possible cervical isthmic incontinence.

Cervical isthmic incontinence is the inability of the cervix to contain a pregnancy, usually due to scraping or surgical injury. "Typically women who have an incontinent cervix - explains Bianchi - tend to have repeated abortion episodes in the second trimester of pregnancy". How do you know if a woman has an incontinent uterus? Simple, the cervix is ​​passable by the finger.

Warning: there is therapy and it is called cervical cerclage. “It is possible - explains the Milanese gynecologist - to surgically insert a band around the circumference of the cervix, tighten it and then surgically close the cervical canal. This closure is released through the cut of the band, usually near the end of the pregnancy ".

(Medical advice: Stefano Bianchi, associate professor of gynecology-obstetrics at the University of our city and head physician at the San Giuseppe Hospital in our city)

Read also: Pregnancy, the first visit to the gynecologist

add a comment of First visit to the gynecologist: All scheduled examinations and visits