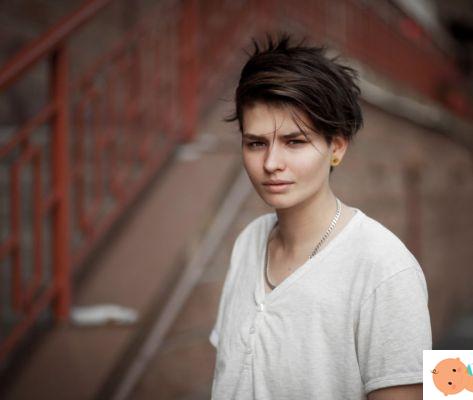 Let's be clear right away: adolescence is that age in which you look at your children and do not recognize them and in which they seem different from what you imagined them in the most unexpected way. Faced with this fact there is a first mistake that the parent must absolutely avoid, and that is to ask himself "But where did I go wrong?".

What does this have to do with our boys' sexual preferences? Sexual orientation is part of the conquests that the adolescent makes in search of his own identity and, as in other areas, the boy and the girl experience, they move among the possibilities that their growth context has.

La fluid sexuality, however, it is new. It has only been talked about for a few years and there is a lot of confusion about its meaning, especially if it concerns the younger ones. We talk about it with Cristina Rubano, psychologist and psychotherapist Health Psychology Specialist, in the city.

What does sexual fluidity mean?

"The term is relatively very recent," said the psychotherapist. "It was coined in 2008 by an American psychologist, Lisa Diamonds. The definition does not highlight a specific orientation, but underlines how many people happen to transiting from one sexual orientation to another occasionally or permanently. The phenomenon came to light with the amplification of sexual freedom and freedom of expression in Western culture and underlines how, potentially, sexual orientation can be a little more flexible than we are used to imagine. The subject is quite new also for scholars: sexual identity would therefore be more potentially "in the making" and subject to a greater complexification even in the course of life, not only in adolescence ".

Read also: Handbook for teenagers who want to grow up

How does sexual fluidity fit into LGBTQIA +?

"The famous and best known theme song LGBT this has already been complexed over time and identifies people who do not recognize themselves in the definitions of male and female at various levels. The acronym LGBTQIA + specifies L for Lesbians, G for Gay, B for Bisexuals, T for Transsexuals, Q for Queer, I for Intersexuals and A for Asexuals, the latter subjects with absence of sexual interests and des. The + highlights the willingness to include other possibilities.

La Fluid sexuality is not a sexual orientation in itself, however, as instead represent the letters of the acronym, but perhaps it allows us to open our gaze that goes beyond a defined label, that is to conceive also this acronym in a more fluid way because the expression of sexuality can be more complex than what we are used to to imagine. This concept allows us to reflect in a less dichotomous way ".

Read also: Teenagers between sex and love, advice to parents

Why do teenagers in this historical period have a great attraction towards sexual fluidity?

"In adolescence every boy and girl are at search for one's own identity which leads them to experiment and make various tests of what one can be and be valid for themselves "explains Dr. Rubano." So it is also for sexuality. In the age in which we live today it seems possible to experiment more: according to some surveys, in fact, it seems that a good 50% of young people could be placed in an intermediate position and not definitely in a safe position regarding their sexual orientation.

The experimentation, and the ostentation itself, of sexuality is freer. Children allow themselves to experiment more and - let us remember - young people have less prejudices than adults on important decisions to make. This resource allows you to probe different expressions of your sexuality towards different goals to get to know each other better. Furthermore, as human beings, we are potentially led to have more sexual objects (there are social contexts, such as prisons, in which this element has been studied) ".

The trap. "The trap is that we remain in limbo, that is when this fluidity is" labeled "and the individual remains without choosing, without reaching an acquired identity, whatever it is. This can be a risk because it can configure a situation in which the adolescent does not reach the stage of a growth project, as in an eternal possibility to decide. We also find this in other areas of children's experiences. What do they do with what they are experiencing if they remain in limbo where they do not decide what to do with own life?".

At what age is sexual identity defined?

At what age is sexual identity defined?

"The conquest of identity, even sexual, goes hand in hand with the maturation of the person at all levels" continues the psychotherapist. "According to neuroscience studies, the adolescent brain is comparable to that of the adult for cognitive aspects or abstract reasoning but for others it still experiences a strong immaturity such as in the perception of risk, emotional regulation and intimacy. The maturation of the brain and nervous system occurs between the ages of 20 and 24 and at this age a sexual identity can also be said to be more defined.. In early adulthood all this has a more structured dimension. This can be true for our society, differently it can be for more collective societies or from a pre-industrial era ".

Read also: Is it normal to be confused in adolescence?

Tips for talking to a son and daughter about fluid sexuality

"On a general level, a child who, not only as a teenager, faces sexuality and experiences it in a fluid way, catches the parent in an unprepared way because he does not seem to adhere to non-explicit expectations in the adult and this can lead to blame. This should be avoided. ", declares Cristina Rubano.

The help of an expert, when?

Fluid sexuality. The help of an expert, when?

"A parent can feel guilty in any circumstance in which the child is not as he would like it to be" concludes the expert. "This happens even to the most enlightened parent, because that child becomes other than you and becomes so impactful. The adult must learn to do a strong decentralization operation, do not look at himself and the need for confirmation of his actions but recognize that what is happening to the child belongs to him and not to the parent.

A teenager by definition opens up a conflict with his parents and the extent of the conflict is an important indicator to ask whether it is happening in a healthy way. Does conflict help the parties to grow or is it a source of rupture? Does it serve to negotiate limits or does one party passively adapt? Does disobedience take place on a partial basis? Are family principles and values ​​eroded in differences? Is trust between parents and children undermined? If the educational relationship can be perceived as undermined on these points, then it may be useful to turn to a third person and the territorial consultants offer an ideal service to provide a different third perspective. The same parent can decide to turn to an expert if he feels he is unable to accept the research and experimentation activity that the adolescent child is carrying out ".

The interviewee is Cristina Rubano, psychologist and psychotherapist Specialist in Health Psychology, in the city.

add a comment of Fluid sexuality: what it is and how to talk about it with teenagers