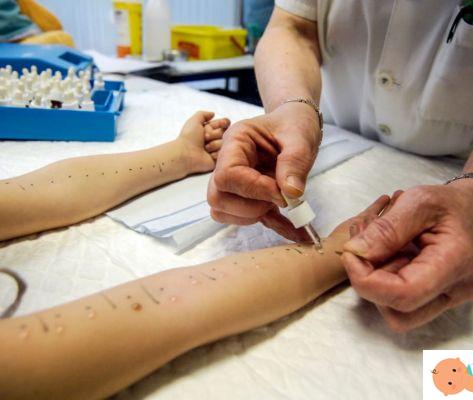 What are food allergies

A food allergy occurs when the immune system it reacts abnormally and excessively to details proteins found in some foods, which are generally hired without problems by the majority of people. This abnormal reaction usually appears shortly after ingesting the food in question and can have varying degrees of severity, from mild to moderate to severe.

Symptoms can affect different parts of the body:

There can also be a terrifying generalized reaction, involving various organs: it is anaphylactic shock, which requires prompt intervention because it can be fatal.

Read also: Children's dermatitis, how to recognize and treat them

The causes: foods that cause allergies

In theory, any food is capable of causing allergic reactions, but only a minority of foods are responsible for the majority of food allergies. In particular, these are:

In most cases, the allergy affects only one food, but there may be situations where an individual is allergic to two or more foods.

Diagnosis is based on the combination of various elements:

The first step is the analysis of the child's medical history, collecting information on symptoms, on the time interval between food intake and the appearance of some abnormal manifestation, on familiarity due to allergies, etc.

This is a skin test using a series of allergenic extracts which are placed at various points drop by drop. The skin will react by forming a small wheal when it comes in contact with the substance the baby is allergic to.

The decisive test to prove that the food is indeed the cause of the symptoms is its exclusion from the diet: in practice, the suspect food is completely eliminated from the diet for two to three weeks, and if at the end of this period the symptoms are still present, it means that the excluded foods are not involved in the onset of symptoms.

If, on the other hand, these have disappeared or are reduced, the food will have to be introduced again in an equipped hospital environment (trigger test): if the symptoms reappear, this is the unequivocal proof of food allergy.

How food allergies are treated

In case of certain food allergy, lTherapy consists simply in avoiding the allergen, that is, the food responsible for the reaction. Of course, that's easier said than done: many ingredients are almost omnipresent in packaged products and for children who have to give up certain foods while their friends and companions can safely eat them there can be added psychological burden.

For this reason, in addition to the pediatrician allergist, it may also be useful to involve the figure of a nutritionist and possibly a psychologist. Sometimes it may also be necessary to take supplements for items that may be missing, such as calcium or iron.

The path to desensitization: the allergy vaccine

Many food allergies pass on their own in the first few years of life. If this does not happen, after the sixth year a path of desensitize (we also speak of specific immunotherapy or allergy vaccine) for the offending food.

In practice: in appropriately equipped hospitals, the child is given a certain amount of "critical" food, for example egg or milk. If there are no side effects, the child will need to take that precise amount of food every day at home until the next hospital appointment, when an attempt is made to increase the dose. It is a long process, which can take years, with very individual reactions: in some cases there will be the total disappearance of the symptoms, in others a more or less marked attenuation.

What to do in case of accidental ingestion

Symptoms caused by inadvertent intake of the allergy-causing food can be mild, moderate, or severe. If several disorders appear at the same time (for example) urticaria, swelling, rhinitis, it is necessary to intervene with emergency therapy (adrenaline with self-injectable syringe, available as an emergency kit, antihistamine and cortisone) and take the child to the emergency room, because there may be risk of anaphylactic shock.

Unfortunately, there isn't much that can be done to prevent food allergies, which depend on a combination of genetic and environmental factors. However, some measures may be helpful in the sense that they appear to reduce the overall risk of allergies:

How long can a food allergy last?

Food allergies very often disappear over time. Other times, however, they can last for a lifetime, especially in the case of a nut allergy.

Can potentially allergenic foods be introduced during weaning?

The answer is yes: contrary to what was thought in the past, today science tells us that delaying the introduction of potentially allergenic foods does not reduce the risk of children developing those allergies.

TAG:
The characteristics of the Aquarius child ❯