Fourth disease or scarlet fever: does it really exist? 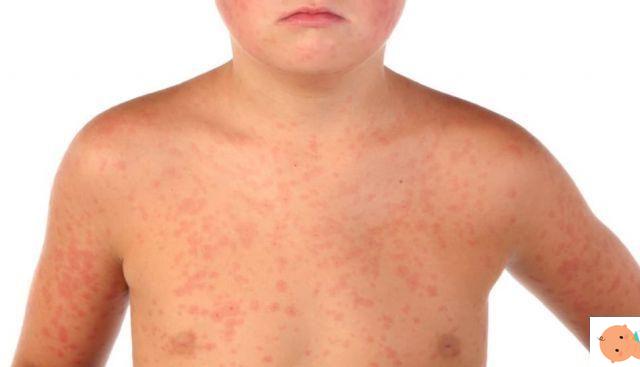 A mild rash, with small reddish spots that appear starting from the trunk, perhaps preceded or accompanied by other symptoms - also mild and not always present - such as vomiting, fever, sore throat, respiratory problems.

In fact, whether this disease - first described in 1901 by the English physician Clement Dukes - really existed has long been a controversial question. Now, however, most scholars agree that it does not exist, so much so that it has actually disappeared from the most recent classifications of the scientific literature and from the manuals of pediatrics.


"At best, what was once called the fourth disease can fall under the so-called atypical rashes"affirm Francesco Drago and Giulia Ciccarese, respectively responsible and coordinator of the Center for skin infections and sexually transmitted diseases of the San Martino Hospital in Genoa.

Atypical rashes, that's what they are

Drago and Ciccarese explain: "These are rashes, that is skin rashes, caused by various types of infectious agents (viruses, bacteria, fungi, parasites) or by drugs, with a more or less different appearance than that of classic rashes, which are measles, scarlet fever, rubella, infectious erythema, sixth disease and chicken pox ".


While classic rashes have a very well-defined clinical picture, and are always caused by a specific virus or bacterium (e.g. paramyxovirus for measles and beta-hemolytic streptococcus type A for scarlet fever), atypical ones have more varied manifestations, and can be caused by various agents, which can give different symptoms.

In a survey conducted on 260 patients - children and adults - with atypical rash, Drago and colleagues identified several viruses (especially coxsackie, echovirus, adenovirus, enterovirus, rotavirus ...) and some bacteria among the most frequent causes of this condition. (beta hemolytic streptococcus, Escherichia coli, staphylococcus aureus ...).

What to do if the child has an atypical rash?

If the child has a rash, even a mild one, perhaps with other symptoms, it is good warn the pediatrician, but it is not certain that there is nothing particular to do. "If the doctor diagnoses a classic exanthematous disease, then we will proceed with the appropriate therapy, for example the antibiotic in the case of scarlet fever. Otherwise we can remain and see how the situation evolves" says Adima Lamborghini, pediatrician of free choice in Silvi (Teramo) and member of the Study Center of the Paesena Federation of pediatricians.


Drago and Ciccarese also confirm: "Often the atypical shapes they resolve on their own within 4/6 days, leaving in some cases a little skin peeling for a few more days, but nothing more. "If, on the other hand, the rash persists or other symptoms become important, it may be necessary to do some more checks, starting with a blood test .

Buffer yes or no?

Particular attention should be paid to the throat swab. "Today there is a tendency to do it on the carpet, every time the child has a sore throat, perhaps by buying it directly at the pharmacy without even hearing from the doctor" Lamborghini points out. The goal would be to detect any strep infections, but the point is that approx 15-20% of children are healthy carriers of the bacterium. "So there is a risk of giving the antibiotic to children who do not need it, or to whom it is not needed, because the bacterium will not be eradicated anyway ". Swab yes, therefore, but only if the doctor recommends it, based on a series of symptoms that go beyond just a sore throat.

Can the child with atypical rash go to school?

"Your condition may not necessarily be infectious, but if you have a rash it means you are in acute illness," says Lamborghini. "So it would be better if you stayed home at rest for a few days, to allow the body time to recover at its best ". [Read also: Children with fever? Let them laze]

add a comment of Fourth disease or scarlet fever: does it really exist?