Fourth month of pregnancy: symptoms, changes and ultrasound scans to do 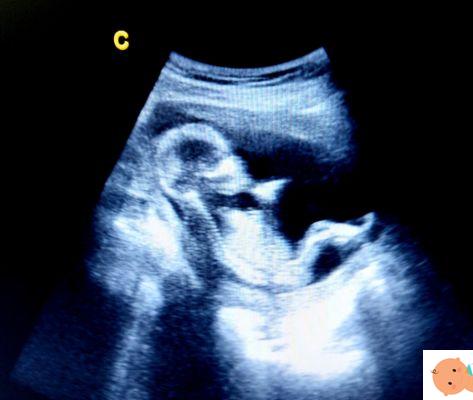 Fourth month of pregnancy: what happens?

Il fourth month of pregnancy that's what mom introduces in the second trimester. After a first trimester made, in most cases, of nausea, vomiting and continuous tiredness, expectant mothers regain energy and this is usually the most pleasant period of pregnancy.

The belly begins to show but still does not weigh, back pain and particular digestive disorders do not yet occur. But let's find out more about what happens during the fourth month of gestation, in mothers and babies.

Symptoms in the fourth month of pregnancy

Typical symptoms of the first quarter (such as nausea, fatigue, breast pain) will gradually begin to disappear. From fourth month of pregnancy the uterus will begin to increase on a regular basis. In this gestation period, the uterus measures roughly the size of a pulpelm. Your tummy begins to grow and, even if you were able to wear your usual clothes until now, it's time to do some healthy, fun and exciting maternity shopping.

Here what are the symptoms that a mother feels around the 13th week and up to the 18th:

Ultrasounds to be done in the fourth month of pregnancy

During the fourth month, usually the second prenatal visit to the gynecologist takes place, during which the ultrasound is also done. It is a visit in which the specialist checks the state of health of the mother and the child and asks the mother for routine blood tests (toxoplasmosis, cytomegalovirus, etc.) and urine.

From the fifteenth week of pregnancy it is also possible to carry out amniocentesis. Also, during the fourth month, the woman - if she hasn't done it previously - can perform the prenatal safe (Dna fetale), a blood sample that allows trisomies or other genetic abnormalities to be identified.

According to the guidelines of the International Society of Obstetric and Gynecological Ultrasound (Isuog), amniocentesis can be performed during the fourth month. In particular, this examination can be carried out starting from the 15th week of gestation.

There are some cases where expectant mothers are advised to undergo amniocentesis: if the pregnancy arrives at or after the age of 40, for example, or if there have already been cases of malformations, genetic diseases, in previous pregnancies.

The amniocentesis it consists in taking a small amount of amniotic fluid to be analyzed in the laboratory. It is an invasive prenatal diagnosis technique that can be performed in specialized centers. Its goal is to carry out cytogenetic investigations to identify any fetal chromosomal abnormalities and search for genetic diseases of which the parents may be carriers or to verify if there are congenital infectious diseases.

Today it is a less widespread technique, especially due to the presence of villocentesis, another invasive prenatal diagnosis technique that takes place in the third month of pregnancy, and for the prenatal safe which - although probabilistic - is quite chosen by mothers for its non-invasiveness.

Belly and weight in the fourth month of pregnancy

In the fourth month of pregnancy, as anticipated, the belly begins to grow, the usual clothes no longer fit and it is necessary to buy comfortable maternity clothes, which ensure comfort for the mother and the baby. Also, in this month, mom's weight also begins to increase.

If, until now, in fact, the mother has gained 1 to 2 kilos, well distributed between tummy and breast, it is in the fourth month that the weight gain becomes more evident, increasing by about 400 grams per week. By following a healthy diet, not leading a too sedentary life, she will reach the end of the pregnancy having assumed between 9 and 12 kg.

What happens to the baby in the fourth month of pregnancy

In the fourth month of pregnancy, the child is fully formed. Now, inside the uterus it will grow, mature, until it is ready to live independently outside the belly.

Between the thirteenth and seventeenth week of pregnancy, in particular, the baby's heart is fully developed and has a heart rate of 120 to 60 beats per minute.

His small eyes are already sensitive to light, the cerebral cortex has formed several convolutions. The spinal nerves and spinal roots acquire myelin and this means that the development of the baby proceeds. The baby begins to have reactions to the bitter substances present in the amniotic fluid, not swallowing them and frowning, while he will appreciate the sweet ones, doubling the rhythm of the sucking.

This is the month in which the first hair on the eyebrows and on the skull also appears, called lanugo.

What not to do in the fourth month of pregnancy

During the fourth month of gestation the expectant mother:

The weeks of pregnancy

The fourth month of pregnancy ranges from 13 weeks + 2 days to 17 weeks + 4 days. It is the first month of the second quarter, the one which - as anticipated - catapults women into a completely new period. Nausea almost eliminated, energy and great vitality. A beautiful month, in which many mothers also discover the sex of their baby.

The fourth month is full of emotions, discoveries for all future mothers and future fathers.

All months of pregnancy

TAG:
Fourth caesarean section: what are the risks? ❯

add a comment of Fourth month of pregnancy: symptoms, changes and ultrasound scans to do