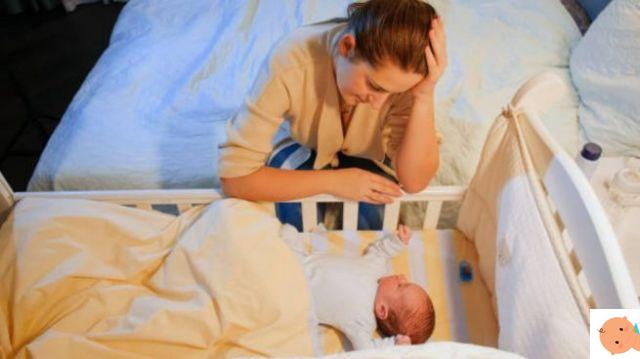 There are scientific, evolutionary, and behavioral reasons for these nocturnal awakenings. Here is a list of main causes.

Babies wake up during the night mainly because their brain waves change and, at the same time, sleep cycles also change as they move from REM to other non-REM phases.

When babies move from one phase of sleep to another, changes occur. During this transition, many babies wake up. Sometimes they scream or cry. Sometimes they wake up because they are hungry.

It is common for children (and adults) to wake up 4-5 times a night during such transitional times. However, most adults wake up and then fall back asleep so quickly that they rarely remember waking up.

At 4 months of age, many parents notice awakenings after an early part of deeper sleep. This is normal and is often due to the development of delta waves (deep sleep). The trick for parents is gradually "do less and less" during these nocturnal awakenings, as the baby grows, in order to help the little ones to calm down without our help.

Sleep improves with growth. Most babies are able to sleep for an extended period of over 6 hours to 6 months of age. After 6 months of age the brain waves start to have one pattern similar to that of adults.

This does not mean that babies over 6 months old who wake up during the night have abnormal brain waves, but it does mean that as they grow they gradually become more and more mature when it comes to sleep.

Read also: White noise to put babies to sleep: warnings for use

And this has to do above all with the "consistency" between one night and the next. Some children make associations such as the following:

So, when they wake up in the night, they may cry out for breastfeeding or to be rocked, with the aim of getting back to sleep again. These associations can cause babies to sleep poorly.

3. Crying is part of being a baby

Crying is quite normal for newbornsHowever, there is an ongoing debate among scientists, parents, psychologists, pediatricians, nurses about letting babies cry or not.

Many pediatricians recommend let the baby gradually learn to calm down after having acquired the ability to do it alone (turning around, sucking fingers or hands, etc.) from 4-6 months of age.

4. The presence of parents

According to recent studies, childhood sleep disorders they are influenced by how many times a parent comforts the child during the night. The longer the parents stay in the room until the baby is asleep, the more they carry the sleeping baby in the crib and the more they pick him up at night, the more likely the baby is to have sleep problems. Very anxious parents are likely to negatively affect the baby.

Additionally some Israeli researchers have found that when fathers were more involved in childcare (day and night), in addition to the mothers, their children had fewer nocturnal awakenings.

Read also: The newborn complains in his sleep: why does it happen and what to do?

The various stages of a baby's development change sleep.

Many babies will have more frequent awakenings around 6 or 9 months due to growing sense of independence and greater self-awareness. Many 6 month old babies are known to wake up in the middle of the night starting to talk and listening to the different sounds they make. There's no need to go to them if they don't get excited!

Furthermore, when i babies develop separation anxiety around 9 months of ageoften change their sleep patterns. During such times of change they are likely to wake up and scream when they realize that you are not by their side.

At 6 months, babies are able to put many objects in their mouths and even their fingers, so exposure to germs increases dramatically.

Many children they have colds or other respiratory tract infections they wake up due to congestion or cough. Fever, vomiting, and diarrhea also cause babies to wake up at night.

Sleep times in general they return to normal after treatment and within a few weeks of the onset of the disease, especially if you can get your little one to maintain a good sleep routine.

Many kids they are prone to fall asleep (or fall asleep again) while sucking something. This habit begins immediately after birth: newborns of a few days fall asleep instantly with breastfeeding or with a bottle.

Babies who use pacifiers to fall asleep may wake up between 6 and 12 months of age when the pacifier falls off. The simplest solution is to remove the pacifier. But remember that great habits die hard: if a baby learns to fall asleep by sucking and does so for more than 6 months, it can take some time to get used to it. Be patient.

Read also: Night panic in children: what pavor nocturnus is and how it manifests itself

Finally, remember then that the process of teething, which begins around 6 months of life, can certainly be one of the causes of children's nocturnal awakenings.

Read also: Children who do not sleep well: what to do?

TAG:
Cycle delay: the causes and what to do ❯

How to go from bed to bed in three weeks

add a comment of Frequent awakenings of the newborn, possible causes