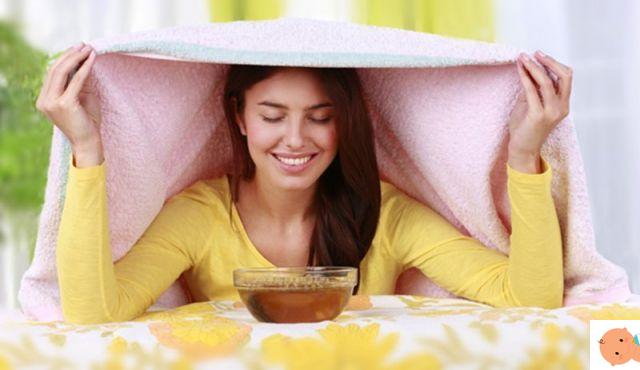 The pediatrician's cell phone is busy, it's Sunday and all in all it's just a cold, will a little fumenti be enough? Faced with a similar scenario, resorting to hot water and a towel on the head seem to be the viable way to remedy a stuffy nose, without particular contraindications.

I fumigations - Or smoked - are a known practice and a home remedy consolidated by tradition. They are not put to the index by the medical community which, however, warns about the real effectiveness of the treatment on children and places some precautions so that it can be carried out in total safety.

We talk about it with Mara Lelii, medical director at the Pediatrics - High Intensity of Care and Pediatric Pneumology Outpatient Clinic of the IRCCS Ca 'Granda Foundation Ospedale Maggiore Policlinico of our city.

What are fumigations and fumenti

"Fumenti and fumigations are used synonymously and indicate typical home remedies adopted to treat the common cold - clarifies the pediatrician -. This modality involves the inhalation of water vapor obtained by bringing the water to a boil in order to obtain an effect decongestant of the upper airways, precisely because of the heat that is released. Sometimes salt, bicarbonate or essential oils are added to the water in order to improve nasal obstruction and thin the mucus. This remedy, which we could define "grandmother's" however, it is not supported by scientific data in children the addition of essential oil is not recommended as not all products are approved in pediatric age, because there are substances that should not be used in children: some fragrances, for example, such as mint or eucalyptus, can be too strong and cause side effects and reactions " .

Read also: How to do nasal washes for babies and children

How to make smokes for children

"This technique has remained in our tradition but there is no scientific evidence on its effects, neither as a prevention nor as a therapy of the upper airways - explains Lelii -. possible risk of burns in the little ones due to the boiling water vapor in contact with the skin. For this reason, especially in the little ones, the practice is not recommended. If it is used, at least then from 6-7 years of age and under close supervision of the adult, it must be done with water vapor only or by adding salt or bicarbonate to the pot. Before starting, it would be good to pour the water that is brought to a boil into a bowl other than the pot, to reduce the risk of burns. It is also better to avoid close contact and contact for too long: after a few minutes let the child take a break to avoid skin reactions in an environment that is too hot and closed. There is no specific duration for the fumigations, we simply say that you can go on as long as there is steam available. Another trick: putting a cloth on the head you can better convey the steam towards the face without sparing, however, delicate areas such as the eyes: especially if products such as essential oils, potentially aggressive, are added, it can cause eye irritation. Again, the fuments are not indicated when the therapy involves the use of drugs because it is not possible to establish with certainty how much will enter the airways. For this reason, in the pediatric medical field there is a tendency not to prescribe this treatment, preferring rather to orient parents towards other methods ".

Read also: Phlegm in children, the 7 things to know

How to decongest a stuffy nose

"There are other proven methods without particular side effects that can be implemented with colds or coughs - adds Lelii -: i nasal washes they are recommended both to prevent viral infections and to try to eliminate mucus while for important nasal congestions you can also carry out nasal showers. The latter also allow the use of drugs or the hypertonic solution, a saltier solution than the physiological one that helps the mucus thinning. These practices can also be used in younger children. Washing can be done daily and avoids the other risks you have with clothes. Nasal washing, again, is performed not only for colds but also for coughs and infections of the lower airways, where it can still be useful to favor the elimination of mucus and prevent "dripping" from behind causing cough ".

Read also: Aerosol therapy and children: advice, when and how to do it

"Aerosol therapy indicated for various pathologies such as acute bronchitis, laryngitis and tracheitis differs from common fumigations and is recommended because, with drug or physiological, it is nebulized more specifically in the airways that we intend to treat and, in the case of pharmacological treatment, it is it distinguishes for the lower absorption of the drug at systemic level throughout the body - concludes the pediatrician -: giving a drug by mouth, in fact, the effects are spread over the whole body, acting less quickly than drugs given by aerosol. side effects are lower. This therapy is indicated on medical prescription and it should be emphasized that every disorder should be treated after evaluation by the specialist. The pediatric visit, when a respiratory problem arises, should be done beyond the prescription of a specific drug ".

TAG:
Smoking in pregnancy and schizophrenia in children: a possible link ❯

add a comment of Fumenti and fumigations for children