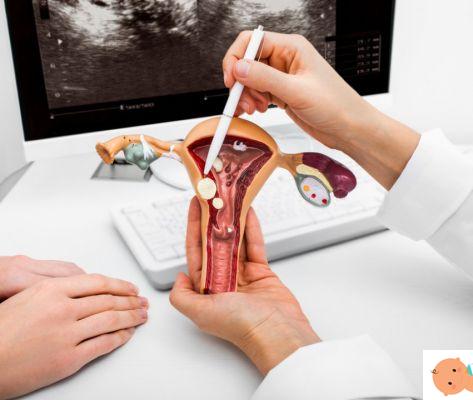 The fundus measurement (or Fundus-Symphysis Measurement) is a periodic check not at all invasive, simple, but still very useful for monitoring the progress of pregnancy. Let's see what it is.

Since the 70s / 80s the measurement of the uterine fundus has become a common practice in monitoring the evolution of a pregnancy. It is a very simple clinical practice that can be performed starting from the twentieth week of pregnancy.

How to perform the Symphysis-Fund Measure

First, the expectant mother is asked to lie on her back on the bed and relax completely, so as not to contract the uterus.

At this point, the patient is performed Leopold's first maneuver, an obstetric maneuver which, in practice, results in a kind of embrace that surrounds the belly and establishes the position of the fetus inside the female uterus and the uterine fundus, that is, the final part of the uterus. Surrounded by the belly, the midwife / or then uses a municipality tape measure to measure the distance between the pubic symphysis - that is, the cartilage joint located anterior to the pelvis, just below the pubic hairline and the fundus of the uterus - and the fundus of the uterus.

What is it for?

The resulting number is recorded and inserted into a table with curves and percentiles which will serve as an evaluation data of the size of the child, of his position, especially of his own growth rate over time.

Measuring the fundus is important because the excessive or small difference in the measurements between one control and the other could signal some problem or strangeness in fetal development. In fact, the measurement can indicate:

This control also allows to evaluate the amount of amniotic fluid present inside the uterus and the tonicity of the uterine walls, an important feature in childbirth, when the resistance of the uterus is tested by strong contractions.

How big should the belly grow?

Normally a normal evolution of pregnancy foresees that the distance examined increases by about an inch every week, counting that in the twentieth week - when you begin to measure the uterine fundus - the data obtained should be around 18-22 centimeters.

Although considered reliable (albeit not as reliable as an examination performed with instruments), the fundus-symphysis measurement is subject to some variables determined by the individual characteristics of the patient. Such factors can be:

Read also: Uterus: how it turns in pregnancy and childbirth TAG:
Vesicular or hydatiform mola ❯

add a comment of Fundus Symphysis Measurement: what is fundus measurement