Give birth with laughing gas 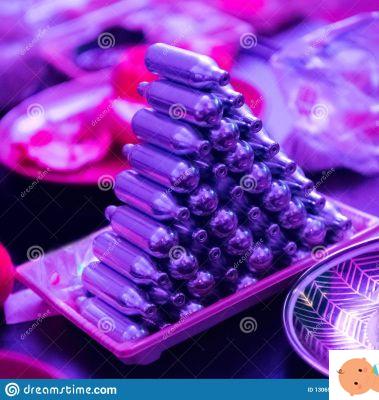 Having entered some Del Paesene delivery rooms for some years now, laughing gas is a harmless gas which, inhaled during labor, allows you to relieve the pain of contractions and to face childbirth with less anxiety. Let's see how it works and what are the benefits and any side effects.

What is laughing gas and what is it used for in the delivery room?

Known by the name of laughing gas, nitrous oxide is a gas that has a mild euphoric, anxiolytic and analgesic effect. The name, however, should not be misleading: by inhaling the gas you will not face labor laughing out loud, even if it would be really very nice, but you will certainly feel less pain.

"Nitrous oxide has been known for hundreds of years in the medical field and is used every day under general anesthesia, to reduce the concentration of other more powerful gases, but with heavier side effects" explains the dr. Edoardo Calderini, Director of the Anesthesia and Intensive Care Unit of the Obstetric-Gynecological Clinic in our city. "In the obstetric field it can be considered an interesting alternative to the epidural, softer and less invasive, even if, it must be said, it is a little less effective."

How is it administered?

In the delivery room, nitrous oxide is never used pure, but is mixed 50% with oxygen. The gas comes administered through a mask fitted with a valve that the woman can open before contraction. About 50 seconds after inhalation, the analgesic effect of the gas is felt.

The exhaled air is then conveyed into a slot placed around the mask and made to flow through the gas-evacuation system of the room, so that there is no dispersion into the environment. "In this way the its use is also safe for operators who assist the woman in childbirth "assures Calderini.
One of the reasons that delayed the spread of the method in delivery rooms was in fact the concern that the gas, spreading in the environment, could give long-term side effects to the health workers present. "With this method of delivery, however, the risk does not arise" says the anesthetist.

What is the effect of nitrous oxide?

As we said at the beginning, laughing gas has analgesic and anxiolytic properties, therefore on the one hand it is able to decrease pain, and on the other hand it helps the woman to feel more relaxed, making her feel less anxiety. The aim is therefore to face labor in a more serene way. Nitrous oxide acts at the level of central nervous system, easing pain centers and releasing endorphins.

Although the gas can give a slight feeling of lightheadedness, the woman remains awake and conscious all the time and maintains contact with your body.

From which stage of childbirth is it used?

Generally the administration of laughing gas begins about in the middle of the dilating phase, when the contractions become very strong and close together and the woman needs to be supported. The effect of the gas is rapid, but it is also very fleeting because the gas is not metabolized and is eliminated in a short time. Because of this inhalations are repeated with each contraction and throughout the duration of labor.
If the woman wishes, she can continue to administer it even during the expulsive phase since it does not significantly reduce the thrust force, and even after delivery to alleviate the discomfort of the suture of any lacerations.

Read also: Childbirth, how do contractions work? A study explains it

Are there any side effects for the baby or mom?

Since it is a gas, you will naturally wonder if there are any side effects for the baby. The answer is no: laughing gas it does not give the child any kind of problem, it is totally harmless.

On the mother, however, it could have gods very slight side effects. As a review of the scientific literature on the subject shows, the most common symptoms are nausea and mild lightheadedness, but no long-term harm. To minimize these possible effects, laughing gas is used intermittently. However, there are no consequences on breathing, thrusting capacity, blood circulation, heartbeat or other functions of the organism. The effects of the gas stop as soon as its inhalation is stopped.

"In any case, demonstrating its general harmlessness is the fact that to use it during labor the presence of the anesthetist is not necessary, nor are a preliminary interview or preventive examinations required, as is the case with an epidural "explains Calderini.

Furthermore, the use of laughing gas does not slow down the progression of labor and delivery in any way. Numerous studies have shown that the use of caesarean section does not increase, nor does it increase the use of instruments such as the suction cup.

Childbirth with laughing gas is indicated for all women with physiological pregnancy. The only contraindications concern some specific, and rare, pathologies such as pulmonary emphysema, embolism, severe dilation of the gastro-intestinal tract, cardio-pulmonary bypass.

Currently, the most widely practiced technique of childbirth analgesia is the epidural and it is also the most effective for reducing the pains of childbirth. "Although it is an invasive technique, since it requires a needle puncture and could cause complications, albeit very rare, the epidural is considered the first choice" explains Calderini, who then continues ". azoto protein however, it is a good alternative for all women who for various reasons do not want to resort to an epidural and prefer it a softer and more harmless alternative".

Plus, giving birth with laughing gas can be a great alternative for all of those too women who cannot use an epidural due to spinal problems, blood clotting defects or fear of needles.

In some cases, the two techniques could be combined. For example, while waiting for labor to be at a good point to proceed with the epidural, laughing gas can be used to relieve some of the pain of contractions.

Where can you give birth with nitrous oxide?

Laughing gas has already been widely used for several years in the UK, USA, Canada and Australia.

In recent years, however, it has also begun to spread to other European countries and has made its appearance in some Del Paeseni hospitals. Among these: the Clinical Institute of the City of Brescia, the Clinic and the Buzzi Hospital in our city, the Careggi Hospital in the city, the Sant'Andrea Hospital in Vercelli, the SS. Pietro e Paolo of Borgosesia, the Santo Spirito of Casale Monferrato, the Moriggia Pelascini of Gravedona and Uniti, the hospitals of Castelfranco Veneto and Montebelluna and the Policlinico Umberto I of the city.

Why has laughing gas arrived here only recently and is not widespread?

In Del Paese, until about ten years ago, nitrous oxide was not registered as a drug, but as a medical gas, so its use was limited only to operating theaters. Today with the new formula in cylinders with 50% oxygen and the on-demand administration, not only has laughing gas been able to enter the delivery room, but it has also been authorized in dental offices for those patients, especially children, who are afraid of dental treatment.
However, to date there are still few centers that have them mainly because of high costs, comparable to those of the epidural.

Sources used: consultancy from Edoardo Calderini, Director of the Anesthesia and Intensive Care Unit of the Obstetric-Gynecological Clinic in our city; information material of the Del Paeseni Hospital Obstetricians Gynecologists Association (AOGOI); article "Nitrous Oxide for the Management of Labor Analgesia", in AANA Journal, 2022; article "Implementation of an Evidence.Based Practice Change to Offer Nitrous Oxide During Labor" in Nursing for Women's Health, 2022; information material of the Del Paesena Society of Emergency Medicine and Pediatric Urgency

TAG:
Giving birth naturally would help the health of the children in their development ❯

add a comment of Give birth with laughing gas