Grisel syndrome: what it is and how it is treated 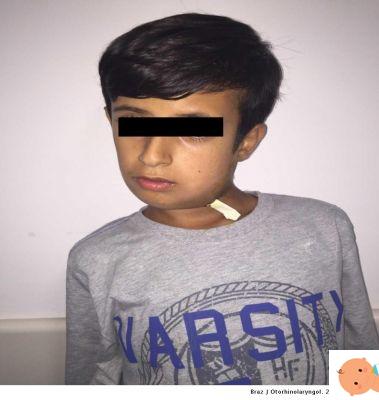 Very rare, difficult to diagnose but definitely annoying. And the Syndrome di Grisel, a little known condition that can occur following operations such as the removal of the adenoids and which almost exclusively affects children.

What is Grisel Syndrome

In simpler words it is a disease caused by the incorrect positioning of the cervical vertebrae old following alterations and inflammations of the oro-ringo-pharyngeal structures. This condition, in fact, is not related to trauma or congenital diseases of the bones, but in most cases it occurs following surgical operations concerned the cranio-cervical segment (neck or airways) o inflammatory episodes as otitis, pharyngitis or tonsillitis.

The patients most exposed to this rare pathology are the subjects between 6 and 14 years of age, although the statistic does not completely exclude adults.

As can be guessed from its "informal" name, the main indicator of Grisel's syndrome is the presence of a persistent stiff neck accompanied by a certain stiffness and tension in the neck itself. However, since the affected area concerns different parts of the body that are interconnected with each other, they are different i symptoms potentially associated with the pathology:

In the most serious cases, however rare, the situation can also degenerate into paralysis tetraplegiche and even acute respiratory failure which could cause the death of the subject.

Diagnosing Grisel's syndrome is not easy as it is a very rare disease and whose symptoms are linked to other more common conditions. However, being able to identify the problem in time is very important as inadequate treatment of the disease can cause one deformity permanent and painful of the neck or, as already seen, lead to even more serious consequences (tetraplagia and/or death).

Diagnosis is usually obtained after radiographs e computerized tomography (TC), the most effective tools for identifying changes in the cervical segments. Magnetic resonance imaging can also play a role in diagnosing the disease, although it is more suitable for detecting any complications related to the medullary and radicular neurological system.

Read also: Clubfoot, what it is and how to cure it

The type of therapy used to treat this condition depends on the timing of diagnosis. In fact, if Grisel's syndrome is ascertained in time, the problem can be solved through the administration of Medicines antifammals and / or by applying a soft collar for a short period.

If not, however, you may need to resort to muscle relaxants, surgical operations or using more rigid (and bulky) collars or tools to support the neck without further straining the joints.

TAG:
Kawasaki syndrome and Covid-19: what we really know ❯

add a comment of Grisel syndrome: what it is and how it is treated