Growth hormone: what it is and side effects 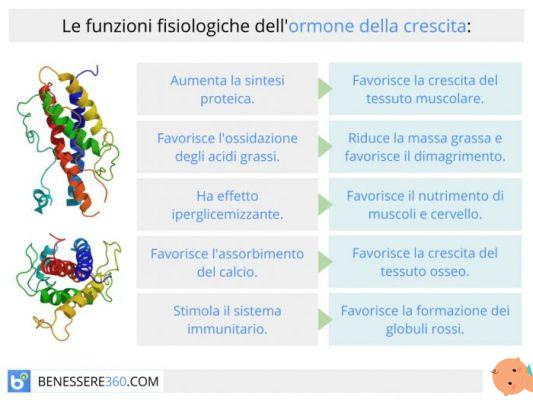 GH (growth hormone), better known as growth hormone, has as its main function that of stimulating the development of the human organism. It is a protein hormone composed of a sequence of 191 amino acids, that is, molecules aggregated in long chains that serve to form proteins. Scientists who carefully measure overall GH production report that it increases during childhood, with peaks during puberty and decline from middle age onwards.

Growth hormone: what it is

This hormone acts on bones, cartilages, muscles and liver through the production of particular substances, called somatomedins (IGF1: insulin-like growth factor), responsible for bone growth; or it intervenes directly on the tissues producing metabolic effects such as the increase of triglycerides and glucose in the blood and the synthesis of proteins in the tissues. The final effect, therefore, is to stimulate the "construction" of tissues and organs.

The main function of growth hormone is to regulate growth in height. The stimulating action on growth begins at birth and ends after the welding of the cartilages present at the ends of the long bones. In young children, levels of growth hormone production are usually low, gradually increasing during childhood until reaching a peak during puberty that coincides with the period of fastest growth.

GH performs important functions no longer linked to growth but to the control of the metabolism of sugars, fats and proteins. In adulthood, GH levels in the blood gradually decrease.

Reduced or absent production of GH hormone (deficiency) can cause in children:

while in adults it can cause:

A GH deficiency can be caused by dysfunction in the hypothalamus; of the pituitary gland; target organs such as the liver (resulting in a defect in somatomedin production).

The growth of children must be monitored at least once a year to recognize short stature and also a change in the rate of growth.
In the presence of short stature and a significant slowdown in the child's growth rate, it is advisable to:

GH deficiency therapy uses a biosynthetic hormone quite identical to that produced by the pituitary gland.
The purpose of the processing is therefore to:

The duration of therapy depends on the severity of the hormonal defect. In most cases it is stopped 2-3 years after the completion of pubertal development.

Excessive GH production can cause children to:

in adults it can cause:

TAG:
Hormones of pregnancy: what they are and how they work ❯

add a comment of Growth hormone: what it is and side effects