Gynecomastia: when he has the breast 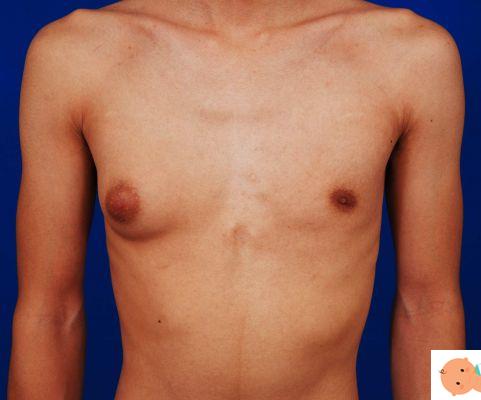 In most cases it is a purely aesthetic problem, which does not compromise the physical state, but impacts on the psychological well-being of adolescents. “That is why more and more cosmetic surgery is being used to get rid of gynecomastia" he claims Stefano Stagi, auxo-endocrinology specialist at the city's Meyer Children's Hospital.

Gynecomastia, from the Greek gyné woman and mastós breast, is a hypertrophy of the male mammary gland. In other words, one or both breasts swell so much that they take on the appearance of a female breast. "It is often benign, non-cancerous, hypertrophy due to an imbalance between estrogen and testosterone." Generally it does not pose a health hazard. However, the psychological distress it can cause should not be underestimated.


"We talk about prepubertal gynecomastia when it appears before the first typical signs of development (increase in testicular volume, changes in the size of the genitals and appearance of pubic hair) and pubertal ginecomastia when, on the other hand, it appears after the appearance of secondary sexual characteristics ”explains the researcher. "In the first case it can generally be an expression of hormonal problems (excess estrogen, the female sex hormones that stimulate breast growth), while in the second it is a paraphysiological picture: because almost all males undergo a transient enlargement of the mammary gland, due to the hormonal changes typical of the pubertal phase ".

Generally the hypertrophy is bilateral, but it can also be asymmetrical (ie the enlargement is greater in one breast), and is more pronounced in children with excess weight (due to the presence of the adipose component, or adipomastia). "In most cases it tends to regress over time" reassures Stagi. "If the gynecomastia persists, then surgery can be considered."

Typically, the doctor explains, a careful medical history is taken and prescribed endocrinological examinations to evaluate whether or not there are hormonal dysfunctions - in practice excess estrogen, and if necessary, start hormone therapy - and to exclude other pathologies that affect the levels of sex hormones, such as hyperthyroidism or hypogonadism.


Gynecomastia can also be induced by taking certain medications, such as some chemotherapy or antipsychotics, and anabolic steroids.

It is advisable to do additionally too genetic tests to ascertain any chromosomal disorders. In fact, gynecomastia is frequently associated with Klinefelter's syndrome, a genetic disease caused by the presence of an extra X sex chromosome in males. “It affects 1 in 500 males, it can cause infertility problems in adulthood and gynecomastia can be a sign of it,” explains Stagi.

If with endocrinological tests, testicular and breast ultrasound and genetic evaluation it is possible to exclude problems of this type, then the situation is monitored over time because a natural regression of the problem can occur. However, if the hypertrophy persists, cosmetic surgery can be used. In practice, the adipose tissue is aspirated (liposculpture), if the enlargement is due to accumulation of fat. If, on the other hand, the hypertrophy is linked to an excessive development of the glandular tissue, a mastectomy is performed to remove the mammary gland.

"Generally it is advisable to wait for puberty to complete for a possible spontaneous regression and, if necessary, in the meantime it is advisable to undertake a psychological path, because even if it is an aesthetic problem that does not endanger physical health, pubertal gynecomastia can have an unpleasant impact on the life of a teenager. There are those who find it difficult to accept themselves, and are ashamed of their appearance, withdraw into themselves, isolate themselves, stop playing sports for the embarrassment of sharing the changing rooms with their peers. This is why when the situation is really unsustainable, surgery is performed even before the age of 18 ”, Stagi points out.

Prevent by keeping your weight under control

In addition to being more pronounced in those who have a few extra pounds, "gynecomastia also tends to persist due to some hormonal mechanisms linked to adipose tissue that tend to convert androgens into estrogens". Here because weight loss is recommended along with physical activity. "On the one hand, in fact, reaching and maintaining a healthy weight reduces the component of adipomastia, that is the accumulation of adipose tissue, and on the other hand physical activity increases the tone of the pectoral muscles" concludes Meyer's doctor.

TAG:
Perineal gymnastics before and after childbirth: the exercises ❯

add a comment of Gynecomastia: when he has the breast