Hard belly in pregnancy: when to worry 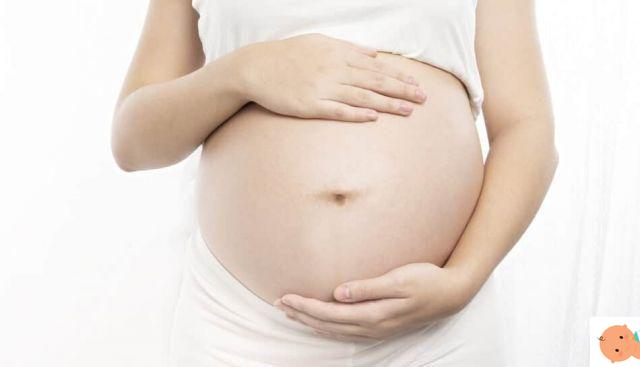 Belly lasts in pregnancy it is a very common condition among pregnant women.

It can occur throughout the nine months of gestation, with some differences between the various trimesters. Davide Dealberti, medical director in the obstetrics and gynecology department of theSanti e Biagio hospital in Alessandria, gives us some advice to understand when to worry and what are the remedies that can be adopted.

Hard belly in the first trimester

A hard belly is a nuisance felt by pregnant women especially in the last two trimesters of gestation. However, it can also happen during the first three months.

«Generally - explains Dealberti - we warn of cramps similar to menstrual pain". It is a feeling and of mild pains due

It is a physiological phenomenon that must not cause concern.

Tummy hard in the second and third trimester

La hard belly it is more common in the last six months of pregnancy. In particular, in the last trimester, "it can lead to prodrome of labor that can last 24 hours or several days".

The important thing is not to confuse these symptoms with the contractions from labor real. «They are two completely different sensations» explains Dealberti.

“The contractions are painful and rhythmic. They usually start showing up after five minutes ». Even in that case, however, there is no need to worry: «The labor lasts more or less 12 hours, especially if it is the first child. So you have plenty of time to get to the hospital before giving birth. "

Read also: Labor room: what it is and what to wear

Hard belly: when to worry

If the feeling of having a stiff stomach is felt especially at the end of the day, there is no need to be alarmed. To get better it should be enough lie down for an hour.

If, on the other hand, the situation persists or occurs already at the beginning of the day, a visit to the gynecologist is recommended, "especially if the swelling is accompanied by dark-colored blood losses". These symptoms could indicate a change in the cervix that carries with it the risk of premature birth. Only the gynecologist can ascertain whether this change has actually occurred, so in these cases it is advisable to contact your doctor.

«The swelling - explains the gynecologist - may also be due to other reasons: constipation that often affects pregnant women, for example. Or to the cystitis of which sometimes women get sick due to hormonal changes due to gestation ». Finally, sometimes a swollen belly "may be the body's response to an incorrect diet". In fact, pregnant women "should eat more or less every two and a half hours" and sometimes a simple snack is enough to make the feeling of discomfort go away.

Hard belly in pregnancy, what does it depend on?

As we have seen, therefore, the feeling of a hard stomach can depend on several factors: from the need to rest for a while to the need to eat something. It can also be caused by the baby's movements and her position in the womb.

When the belly hardens are it contractions?

Braxton Hicks' preparatory or physiological contractions occur suddenly, hardening the belly, but then they pass (sometimes you just need to lie down for a moment) and do not return. True contractions are regular, occur at an ever closer distance and increase in intensity.

Remedies for a hard stomach

The things to do

The first remedy to take is lie down in bed for about an hour. The gynecologist can also prescribe the magnesium which, adds Dealberti, “is a muscle relaxant that also acts on the uterus. It is a natural remedy that can be used throughout pregnancy ». Even one hot shower, by carrying out a vasodilating action, it can help.

However, it is not recommended to massage the affected area: «The uterus is a muscle and, like all the others, it reacts to stimuli». The effect of the massage would therefore be the opposite.

Hard belly due to feeding

If, on the other hand, the swelling is caused by intestinal disorders, the solution can be to privilege a diet based on fruit and vegetables and hydrate yourself. "On average, it is recommended for pregnant women to drink one and a half or two liters of water a day," concludes the doctor.

I am pregnant and sometimes I have a stiff stomach: do I have to worry?

Generally, it is a physiological phenomenon that should not cause concern. If the feeling of having a stiff stomach occurs especially at the end of the day, there is no need to be alarmed. To feel better you should just lie down for an hour.

I am pregnant and I constantly have a hard stomach and some blood loss: should I worry?

If the feeling of "hard belly" persists or occurs early in the day, a visit to the gynecologist is recommended, especially if the swelling is accompanied by dark-colored blood loss. These symptoms could indicate a change in the cervix that carries with it the risk of premature birth. Only the gynecologist can ascertain whether this change has actually occurred.

add a comment of Hard belly in pregnancy: when to worry