Head, eyes, skin: the appearance of the newborn in the first hours of life 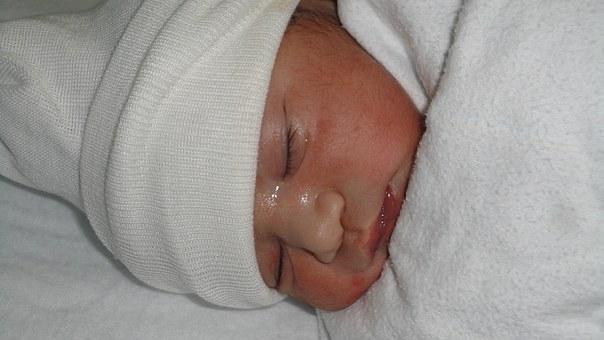 You have imagined him for 40 weeks, thinking about what his skin would have been like, the color of his eyes, the special scent that each child gives off ... And now that you are there next to him, after overcoming the stress of childbirth, your little one it appears to you as the most wonderful being you have ever seen, beyond all imagination. Yet, as soon as they come into the world, babies can appear a little wrinkled and perhaps with a deformed head. Everything is regular: in a short time the little frog will turn into a beautiful prince.

So let's see what the newborn looks like in the first hours of life.

Appearance of the newborn: the head

Let's start with the head. Although it may appear elongated or even pointed, it will take on its normal shape within a few days. Do you remember? On the head there are 4 large plates and soft areas - the fontanelles - which are not welded to allow the baby to pass more easily into the birth canal. You can certainly touch and stroke them. The only warning is not to crush them.

How are the eyes of a newborn

Let's move on to the eyes. They usually open immediately after delivery, sometimes even before the body has fully slipped out. In some cases, however, the newborn is unable to open them due to swelling due to the pressure exerted on the head during birth. Another reason may be a yellowish discharge holding the eyelids stuck - this is not a worrying problem, but eye drops may need to be used to avoid complications.

In most cases, a newborn's iris (i.e. the colored part of the eye) tends to be blue. But do not sing victory: it is by no means certain that that will be the final color of your child's eyes! The hue changes, gradually assuming (usually around the sixth month) the natural pigmentation.

Appearance of the newborn: the skin

Immediately after the effort of childbirth, the baby may have a grayish or slightly cyanotic color: as soon as he starts to breathe he will turn pink. The body is wet, slippery, it can be stained with blood or vernix, that white and slightly buttery substance that protects it from amniotic fluid for the 9 months it is in your womb.

Don't worry if your skin has spots, irritation or small swellings - they should disappear around 3 weeks of age, when the blood vessels stabilize. Some babies have fine hair on the forehead, earlobes, or other parts of the body, which will disappear on its own in the first few weeks. This fluff may be more noticeable in premature babies.

Appearance of the newborn: other characteristics

And speaking of the appearance of the newborn, let's talk about hair. They can be sparse and thin or you could have the surprise of a "long-haired" child with a very soft mop. However, the first hairs are destined to fall out after some time from birth to be replaced by other less soft ones.

Finally, after giving birth, many babies also have swelling of the genitals and mammary glands (they can even produce a few drops of milk). The reason is particularly high hormone levels in the maternal blood.

add a comment of Head, eyes, skin: the appearance of the newborn in the first hours of life