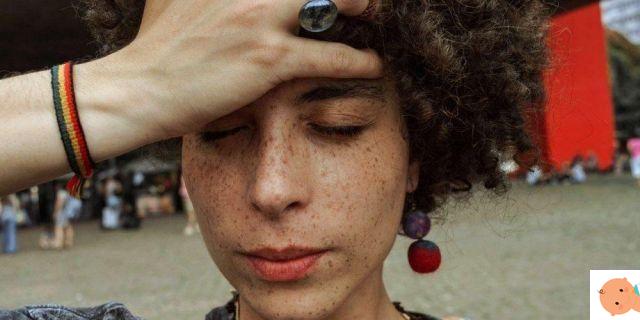 Sometimes it comes slowly, concentrates between the eyes and then squeezes the whole skull. At other times, however, he rises almost silently from the shoulders and takes the neck. Often he is just passing through, but sometimes he is so violent that he is bedridden. In short, in the event of a headache or migraine you only want one thing: that it passes as quickly as possible! Headaches in pregnancy are not uncommon. On the contrary, it can happen to have it often. The reasons are many. Let's see them and, above all, look for the best remedies.

Different situations occur during gestation. Those who suffered from headaches before getting pregnant very often see tremendous improvements with a drastic decrease in attacks. In the most fortunate cases, the headache becomes just a distant memory for the whole 9 months. It disappears, almost by magic. And it's a great feeling.

Other times, however, the exact opposite happens. A nasty surprise that one would gladly do without. Finally, it could also happen that, with pregnancy, there is no classic "head circle", but different shapes. One of these - rather unpleasant - is migraine with aura. In this case, the headache is preceded or accompanied by visual symptoms, such as flashes of light in front of the eyes. When it happens, tell the gynecologist.

Causes of headache in pregnancy

The main reason why you often have headaches with the belly is to be found in the hormonal variations typical of pregnancy. This happens especially in the first trimester, which is the one in which the headache is generally more frequent. In the following years the situation improves because the hormones (especially estrogen) are much more stable.


In addition to hormonal changes, there are other causes of pregnancy headaches:

Deficiency in some vitamins and minerals (for example, folic acid and magnesium).

Most common types of headaches

In general, headaches in pregnancy can be considered a normal event. However, it is always advisable to point this out to the gynecologist, especially if it occurs often or if it is accompanied by other important symptoms, such as vomiting or excessive sensitivity to light.

There are two main forms of headache that can affect during pregnancy:

Migraine. It is a throbbing and annoying type of headache. Usually, it starts slowly, on one side of the head, then spreads to the forehead and up to the temple. Sometimes it involves both sides of the head. The intensity can be quite strong. Migraine is sometimes associated with nausea, vomiting, sensitivity to odors or light.

Muscle-tension headache. Sufferers speak of a typical "head circle". This headache tightens like a vice, but the cause is to be found in the muscles of the neck and shoulders. Stress, for example, tends to accumulate in the muscles. Bad postures (for example when watching TV or working on a computer) also play their part.

There are other types of headaches, such as cluster headaches. Some are secondary, that is, caused by other disorders. A typical case is that of sinusitis, an inflammation of the paranasal sinuses which, among its symptoms, also has an annoying headache concentrated between the eyes. Another example is trigeminal neuralgia. Influenza and parainfluenza viruses also cause more or less intense headaches.


Headaches in pregnancy: when to worry

Sometimes a pregnancy headache becomes a sign of something wrong. When it occurs recurrently and is very strong and if it is associated with high blood pressure, it could be the alarm bell of pre-eclampsia, also called gestosis. It is a late pregnancy complication. Hypertension is also present among the various symptoms.

The consequences of gestosis can be serious. These include fetal growth retardation, but also intrauterine death. Therefore, in case of frequent and very painful headaches it is necessary to contact your doctor immediately to check that it is not an onset of pre-eclampsia.

A violent headache could also be one of the manifestations of eclampsia, which is the next and most severe form. If you experience problems such as abdominal pain, visual symptoms (for example, double vision), confusion, you should go to the hospital immediately.

Headaches in pregnancy and medications

The only person authorized to recommend drugs during pregnancy is the gynecologist. Never go out of your own way or listen to suggestions from friends and relatives. Generally what is prescribed is acetaminophen, which is considered safe for both mother and baby. Non-steroidal anti-inflammatory drugs (NSAIDs) are not recommended.

For advice on medications during pregnancy, you can contact the Red Telephone (06-3050077) or the toll-free number of the Poison Control Center of the Papa Giovanni XXIII hospital in the city. The number is 800-883300 and it is completely free.

Before thinking about drugs, you can try some other remedies depending on the triggering cause of the headache.

Insomnia. You can look for some remedies to promote sleep.

Stress. To say it is very easy, but really reducing it is another story altogether. Every pregnant woman should try to get pregnant as peacefully as possible. Thoughts (sometimes even negative) are inevitable: a child changes everything. However, eliminating the sources of anxiety can already be a good way to relieve stress and, consequently, headaches.

Muscle tensions. One solution could be a nice decontracting neck or shoulder massage. In these areas of the body they are not forbidden during pregnancy and indeed could give great benefits. However, it is important not to improvise, but to have them done by expert people.

Food causes. Some foods more than others can promote the onset of a headache or make it worse. An example are fatty ones, such as chocolate or some cheeses. Better to avoid them, if possible, and instead prefer healthier foods, such as fruit and vegetables, lean meats and fish, whole grains. They may not solve, but they can help.

Nausea and vomit. They are among the typical pregnancy symptoms. Each mom experiences the most effective method for herself. From car sickness bracelets to ginger, from small sips of water and lemon to mint candies, from crackers to dried fruit, there are many ways to try.

Anemia. It is very common in pregnancy, especially from the second trimester when the fetus absorbs a large part of the mother's iron. Tiredness, fatigue, paleness, headache, difficulty concentrating are some of the symptoms.

Among other remedies for headaches in pregnancy, you can try massaging the forehead and temples with a few drops of Olio 31; rest in a dark, quiet and cool place; put something cool on your head or, if the source is muscle, keep your neck and shoulders warm. And have a little patience: the headache will go away sooner or later.

add a comment of Headache in pregnancy: causes and natural remedies